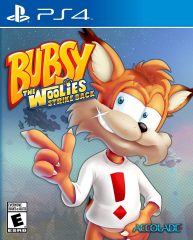 Time passes and Bubsy continues to fester in the recesses of gaming: clinging to relevance as a minor gaming icon through the incredible Arcane Kids art game critique masquerading as a Bubsy game and the ever constant reminder that he had the gall to release a bad 3D platform mere months after one of Mario’s finest outings. Perhaps it’s fitting that during the immediate wake of the critical and commercial knockout Super Mario Odyssey, the old Bobcat slips on a faded T-Shirt and with the blessing of the resurrected in-brand-only Accolade does what he does best: goes out in search of a quick buck. 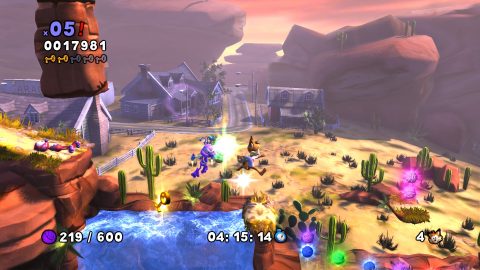 Much to the disappointment of the presumably dozens of honest dedicated Bubsy fans out there, the game simply is not particularly interesting. Developer Black Forest Games (Giana Sisters: Twisted Dreams) appears to have taken their previous games engine applied some minor modifications and upon throwing in a quick helping of Bubsy iconography such as the Bobcat himself, a few flavors of Woolies, and a suitably well put together soundtrack by Chris Hülsbeck, and more or less called it a day. 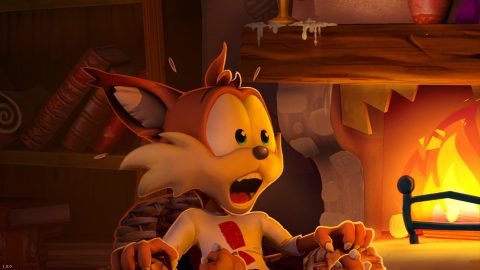 Clocking in at about 2 hours in length or perhaps more accurately – $15USD an hour if going by the $30 US MSRP, Bubsy: The Woolies Strike Back lacks the particular charms that you may have come to expect from the franchise. While Bubsy can glide and has a new pounce attack that manages never to quite feel natural, you’ll notice almost all the animations he once had are gone – death imbues nothing but a scream as he flies off the scree, water causes Bubsy to spontaneously combust, and the levels themselves (all three types) are the utterly uninspired Countryside/Desert/Space motif with almost nothing to differentiate them mechanically but some mild environmental obstacles and enemy types. Long gone is the Carnivals, Mad Hatters Tea Parties and abstract alien landscapes of the old games. There’s still yarn to collect and there’s still a fairly satisfying sound to it, but to really drive it home, the end of the stage is now a sign post without the delightful spray of yarn balls which has been unceremoniously removed. 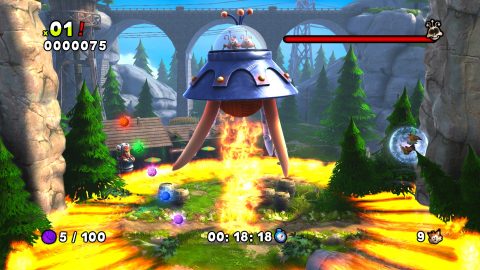 Perhaps the most frustrating problem is that many of the old Bubsy issues remain and some are possibly made worse still. While Bubsy has been granted a shield T-Shirt and no longer takes falling damage, the hitboxes are less than ideal, the stages are smaller and unrewarding to explore with the titular Bobcat not quite trapezing around as dangerously as he once did. But constant death is still just around the corner and the game’s three bosses aren’t at all interesting. It all comes together to make the game feel like a follow up Bubsy 3D than the earlier 2D titles, but without that game’s surrealness. There is a slider that allows Bubsy to quip at greater or lesser frequencies, a nice inclusion. And, if we’re being honest, there’s actually a decent amount of dialogue, even if much like the game itself, is fairly tepid and you’ll be bored of it before you hit the end. 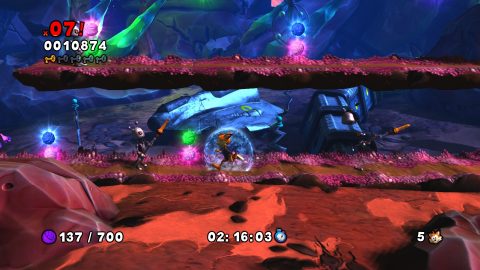 While not the worst thing to come out of 2017, the ever present question around Bubsy: The Woolies Strike Back is simply, what was the point of this whole exercise? No one truly wanted another Bubsy and this one manages to straddle the line of being impossibly short and unremarkably bland. There was a bit of ironic humor to be mined out of the Bubsy Twitter account, who shamelessly aped Sega’s Sonic the Hedgehog gimmick as a goofy meme spewing machine, mirroring their rivalry from the 16-bit days with an extra dose of patheticness. Maybe this new game would’ve been better if it were indeed just a joke, instead of something hugely forgettable.