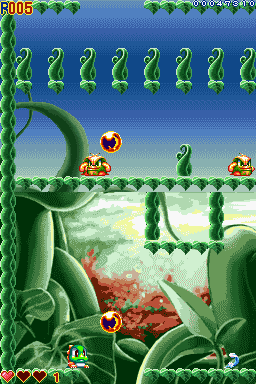 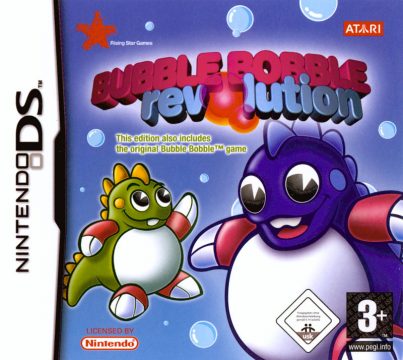 The first Bubble Bobble game to hit the Nintendo DS boasts an arcade perfect version of the original Bubble Bobble along with an original mode with 100 brand new levels, two new characters, and DS-enabled functions such as blowing on the mic to move fans and touching the screen for certain mini games. While this initially sounds like an attractive package, Revolution is full of baffling design decisions, hit-or-miss music and sound effects, and poor level design. Worse still, the initial run of the North American release contained a bug that made it impossible to play past level 30.

Before any of that can be experienced, however, most players will be struck by the artstyle Revolution employs. Rather than continuing the series’ trademark cutesy style, Bub and Bob appear as squat, goblin-like creatures with heavily saturated colors. All of their enemies fare no better, often looking like a cross between their original cartoonish designs and some attempt at making them look more realistic. It’s jarring to say the least, and combined with the numerous dark-colored fantasy-inspired backgrounds the game looks like a mess as a whole. 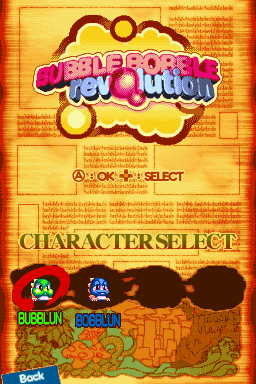 Some effort was made at updating the gameplay, with Bub and Bob possessing differing statistics such as Bub being faster than Bob, while Bob can jump higher. Players begin the game with two lives, and can take three hits before dying. Furthermore, both brothers can charge up their bubbles and fire a super bubble with two different functions. Firing the super bubble normally can capture up to four enemies at a time and, when popped, one of the defeated enemies drops a key critical to reaching the end of the game. The second is rebounding the bubble off the wall and into the brothers, who then fly across the stage at high speed. Crashing into enemies instantly defeats them, while also preventing Bub and Bob from being harmed by projectiles. Known as the rolling bubble technique, this is useful for safely defeating multiple enemies that have lined up or for creating a frantically bouncing death trap for anything that may be about to fall on top of the brothers.

There are two new characters, robotic Robolun and pink Lovelun, but they are are locked by default and can only be played after fully completing the game with either Bub or Bob. Finishing the game the first time unlocks Robolun, while beating the game a second time with Robolun makes Lovelun available. This is a significant time-sink, especially considering players must make sure to collect a key by defeating four super bubble-trapped enemies every 10 levels. If Revolution was more engaging then perhaps players would be inclined to beat the game that often, however an array of issues makes Revolution a chore to play.

While previous entries often emphasized puzzle-based levels, action-oriented levels, or a combination of both, Revolution instead focuses on an obstacle-laden design. Most stages are full of smaller platforms that must be traversed while enemies bounce about the geometry of the level or crawl down the platforms. When these levels aren’t featured, narrow floors full of ceiling spikes make their appearance. Neither of these configurations are particularly engaging, and at best are boring and at worst just irritating. Some stages feature fans that can be activated by blowing on the mic or bubbles that create mirror images of the player that can be traded places with, but these gimmicks aren’t used in an entertaining manner.

To its credit, some of the music in the game is fairly good. Every 10 levels feature a different remix of the original theme, though some are definitely better than others.

The sound design varies from average to grating. Super bubbles make a satisfying “pop” when they burst, while the normal ones make a bizarre whirring sound that sounds as if you’ve defeated an enemy. Given the number of small bubbles that are often bouncing around the level, you’ll hear that annoying whirring sound at least 50 times a stage.

Bosses appear every 10 levels and, like most games in the series, aren’t enjoyable to fight. While none of the bosses fill the stage with a ton of projectiles, most simply move slowly about the level in an attempt to bump into the player. The bosses are easily avoided – with the exception of the level 100 boss – and are ultimately boring encounters.

While all these elements create a particularly unremarkable game, the game-breaking bugs turn a boring game into an absolutely terrible one. The initial release in North America contained bugs that would prevent enemies from spawning, including the level 30 boss which prevented players from progressing past that point. Bugs would also randomly skip players ahead levels, which admittedly may have been something of a blessing. Codemasters later responded and replaced owners’ affected cartridges in 2007 with the corrected version, along with tossing in a free copy of Rainbow Islands Revolution. By that point, however, the damage was done and reviewers and players alike had nearly universally panned the game. 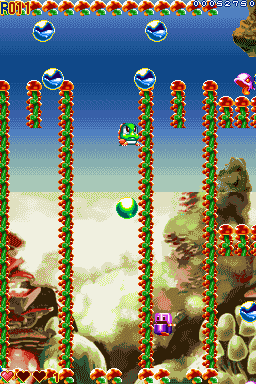 Revolution can be played with two players, however each player needs their own copy of the game. Given it’s poor quality, finding a second player with a copy – or willing to play the game at all – would have been unlikely.

All-in-all Revolution is perhaps one of the few games in the series that should be actively avoided. The new characters don’t provide any appreciable difference to the game, and its poor level design and ugly presentation provides little joy or entertainment.