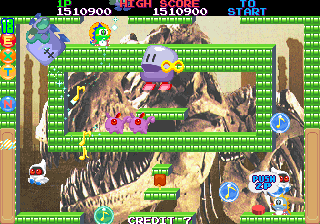 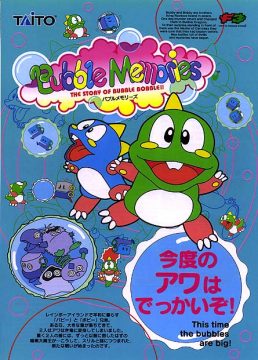 As the third direct entry in the Bubble Bobble series, Bubble Memories attempts to marry the action-oriented focus of Symphony and the puzzle-like approach to level design found in Bubble Bobble to varying effect. While Bubble Memories is certainly an improvement over Bubble Bobble, it falls flat in other ways making it equal to or even somewhat inferior to Symphony.

Bubble Memories, despite being the third direct game in the series, falls between Bubble Bobble and Bubble Symphony in the game’s storyline. Brothers Bubby and Bobby are relaxing on Rainbow Island when a powerful monster suddenly appears, transforms them into bubble dragons, and destroys the rainbow potion that would return the brothers to their human form. The monster – Dark Super Great Dragon – then seals itself at the top of a tower that was intended to overlook and protect Rainbow Island. It’s up to Bubby and Bobby to scale the tower, find seven different colored potions to recreate the rainbow potion, and then defeat Dark Super Great Dragon to save Rainbow Island and once again reclaim their forms. 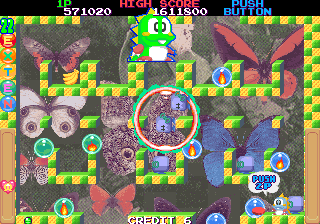 When playing Bubble Memories two elements are immediately apparent; the spritework in the game is absolutely gorgeous and the backgrounds are hideous. Bub, Bob, the enemies they face and the special effects caused by the magic items they collect have never looked better. Enemies are well-animated, expressive, and full of personality. The common Drunk enemies, for example, drain their bottles and shake them out to make sure they’re empty before whipping them at the brothers. The boss Mighta P, a jester-like enemy, puts on one last juggling show before being defeated while Taro P, a Drunk-type boss, staggers across the screen hiccuping and crashing into the sides of the stage. It’s clear a lot of effort was placed into the sprites and it’s easily one of the best aspects of the game.

Unfortunately, all this effort is brought down by the awful backgrounds found throughout the stages. Whereas Symphony had bright, colorful backgrounds based on the themes of each world, the backgrounds in Memories are nothing more than pixelated animals. On occasion the backgrounds may match the theme of the particular stage you’re on – birds in a stage that features a lot of falling for example – but otherwise it comes off as extremely slapdash. It’s still better than the pitch black backgrounds of Bubble Bobble, but considering Memories was released 10 years later that isn’t particularly impressive.

Memories ditches the multiple character angle that Symphony touted and instead reintroduces Bub and Bob who control exactly the same as each other. Charge attacks return but have been massively improved – perhaps too much in fact. Holding down the fire button for a little over a second enables Bub and Bob to belch out a huge bubble that can capture multiple enemies at once and pierce walls. While the charge attacks in Symphony were nearly useless due to popping on the stage, the huge bubbles in Memories can easily capture enemies hiding behind walls or snap up a large congregations of enemies. Popping multiple huge bubbles with a single enemy inside each or one huge bubble with multiple enemies doubles the normal chain pop bonus, enabling players to quickly accumulate an absurd number of points in a short span of time. 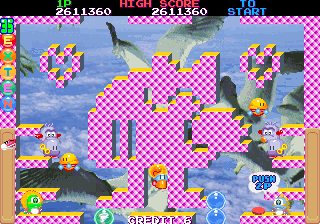 Charge bubbles play a huge part in the game; It’s expected players learn that they can now shoot through wall given that many stages throughout Memories are designed with that technique in mind. Huge versions of standard enemies are also introduced and they can only be defeated using special attack bubbles or capturing them in charge bubbles. Despite the threat huge enemies provide, pushing through the early part of the game is a breeze due to how overwhelmingly powerful charge shots are. This changes near the second half of the game, however, as monsters begin breaking free after being trapped for only a few seconds. This is fairly jarring, as players will likely cruise through the beginning of the game and then suddenly find themselves dying repeatedly as they learn their bubbles are no longer quite as effective.

The level design is also fairly bumpy, especially if players are used to the more snappy levels of Symphony. While the initial levels in Memories are fast-paced and designed more with action in mind, throughout the latter half of the game numerous puzzle-like stages are introduced. Players are expected to know how to bubble jump, pass through the geometry of the levels, shoot through walls of the stages, bubble nudge, and carefully use special bubbles in order to proceed. While this normally wouldn’t be a bad thing, the timers on these stages are very strict and players will likely suffer deaths due to being rushed or getting hunted down by Skel Monstas. In this way the puzzle-like levels feel like they’re being held to the speed standards of the action-oriented levels, giving Memories a disjointed feeling.

New items and are introduced in Memories such as crosses that enable the brothers to fire large bubbles that soar in front of them and then directly upward and balloons that allow players to skip multiple levels like the old umbrella items did. Many older item effects have received significant improvements to their effects as well. The water cross creates multiple geysers of water that erupt from the stage when collected before completely flooding the stage, and the bomb item engulfs the stage in an intense series of explosions. Collecting Chakkun’s Heart not only makes you invincible and fast, but also massively increases your size. Point items continue to reference previous Taito properties such as 8-bit Sayo-chans from Kiki KaiKai, huge Silver Hawk sprites, and 8-bit Bubs.

New enemies also roam about the tower like robotic tanks that can fire in different directions and irritating cat enemies that can climb all over walls and seemingly reach you no matter where you are at. Despite that, there’s much less variety than what was found in Symphony and many of those monsters are nowhere to be seen in Memories.

Although there are no new special attack bubbles in Memories, several of the previous ones have been changed slightly. Tornado bubbles now fire whirlwinds at 45 degree angles opposite of the way Bub or Bob were facing when popped, and music note bubbles release notes that lazily drift upwards in zigzag patterns. All special attack bubbles can be enhanced by charging them up during boss fights, making the resulting effect larger and stronger. In some cases, though, you may be better off just spamming smaller ones than trying to hit a boss with an enhanced effect.

Players now face off with bosses every 10 levels, though these battles continue to be a sore spot in the series. Bosses either have incredibly simple patterns that can be exploited, or they fill the stages with a mess of deadly projectiles. The first few bosses can be quick killed by spamming bubbles in the corner of the stage, while later ones will likely eat several credits before falling. 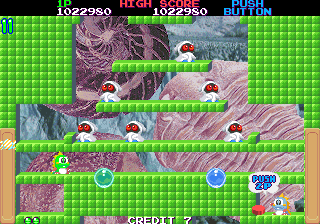 Memories also reuses the scavenger hunt aspect from Symphony and earlier ports, forcing players to find invisible potion tiles hidden throughout the game. Somehow this is both easier and harder than it was in Symphony. Potion tiles are hidden in every level that ends in five and are almost always found in the dead center of the stage with the exception of a few others. While on the one hand this makes it simpler to focus on enjoying the game and clearing each stage, it also means that one mistake dooms you to the bad ending. Collecting anything short of 7 potion tiles results in Bub and Bob being transformed into monsters at stage 70 – whose type depends on the total number of tiles collected – and ending the game early. Missing a tile is remarkably easy to do as well; clearing the stage too quickly, collecting a full set of EXTEND bubbles on a tile stage, or accidentally grabbing the Balloon item and skipping the stage instantly excludes you from the final 10 levels. This places a heavy strain on a two-player game as it’s critical for both players to constantly communicate with one another on which items to collect and avoid, what enemies to trap and kill, and consistently call out item spawn points so that a fatal level skip isn’t grabbed.

Super Mode returns via code once again and functions exactly as it has in other games. The brothers still need to discover the rainbow potions hidden in stages that end in five, though the stages are different in Super Mode and somewhat harder. Reaching the 70th floor with all potions in hand enables players to find the true final boss and receive the best ending.

The final significant addition to Memories is the water stage hazard. Parts of different stages are flooded, which greatly diminishes the speed of both players and monsters. Escaping from water hazards depends on the momentum players are able to generate; mashing the jump button to swim from the bottom of the hazard to the top enables the brothers to rocket out of the trap, while trying to swim out from the surface makes it extremely difficult to escape as they flounder about with short hops. Water traps aren’t used in any particularly interesting ways, unfortunately, making them more of an annoyance to deal with more than anything else.

Overall, Bubble Memories is a mixed bag. The magic item effects, sprites, and overall charm are huge draws and the early gameplay is very friendly to newcomers thanks to how powerful charge bubbles are. Despite this, the game is ultimately let down by its boss battles, unforgiving scavenger hunt elements, and pixelated backgrounds. Some stages are extremely fun and fast-paced, while other stages feel hastily assembled with cheap enemy placement and puzzle aspects that must be solved extremely quickly to avoid suffering a lost life.

Bubble Memories did not see a contemporary port – its only home release was on the Taito Memories II Joukan compilation for the PlayStation 2, released only in Japan.