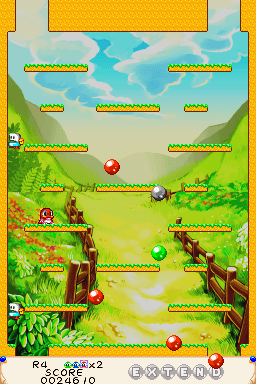 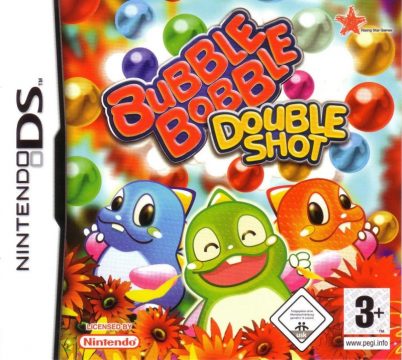 The final Bubble Bobble release for the DS sees Bub and Bob visiting their crimson-colored cousin, Bubu, and their elderly grandfather. The boys find a treasure map which prompts them to set off on an adventure to find its location.

While the story is relatively barebones, Double Shot is an improvement in many areas compared to Revolution. The game is playable, fortunately, and free of any game-breaking bugs like the previous release was prone to. The graphics are improved somewhat as Double Shot attempts to return to Bubble Bobble’s cutesy roots in its cover art, and the spritework hews more closely to the series’ cast of characters’ original designs. The brothers and their cousin still look somewhat off, but it’s certainly better than their previous goblin-like appearance.

Double Shot’s major change to the series formula is the ability to switch between the brothers and the cousin who each fire their own different colored bubbles. Certain enemies in the game can only be captured by specific colors – or combination of colors – requiring players to switch among characters in rapid succession as they clear each stage.

The DS’s mic and touch screen functionality comes into play, though only just barely. Some stages require players to blow into the mic to move fans – much like Revolution – while the touch screen is used to draw bubbles to revive the bubble dragons in order to continue the game. Neither activity is particularly engaging and the game could have easily done without these features. 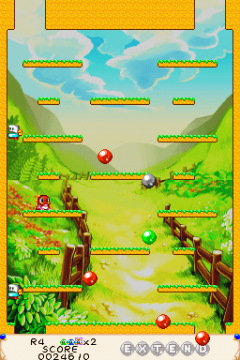 Beyond that, there’s really nothing else to the game. Statistics and health were removed from Double Shot, returning it to a more classical style of gameplay unlike other series entries. There’s still the usual round of power-ups, from fire rate increasing candy and speed increasing shoes to time-stopping clocks and screen-clearing crosses of thunder. The game also removed the scavenger hunt aspects many other games adopted, meaning players can clear stages with impunity without worrying about hidden tiles and the like.

The trouble with these design choices, however, is that the game then becomes wholly reliant upon clever stage design and presentation. Most Bubble Bobble games have stages designed with some kind of challenge in mind. Revolution made the mistake of designing stages akin to obstacle courses, which made the game feel like a chore to push through. Double Shot seemingly doesn’t have any sort of challenge in mind in its design, with most stages simply dumping enemies on the screen and expecting players to clear them out. The only real challenge comes from the narrow corridors most of the levels feature, and that’s only because they’re difficult to traverse or block bubbles from being fired easily. There’s nothing particularly offensive about them but at the same time they’re not all that fun either. Rather than creating interesting levels the designers seemed content to make the stages look like pictures or messages.

Stages also cover both screens of the DS and leaves a ton of dead-space to move about in. In a multiplayer game this would mean two to three players would call out where they were going and what enemies they were focusing on to quickly clear each stage, but in a single player game it results in a lot of sluggish bubble jumping to attack out-of-reach monsters or significant backtracking to pop lazily floating captured monsters. Double Shot seems like it was created with multiplayer in mind, but the levels are so sparse it would just result in 2 to 3 people getting bored together.

It’s unfortunate that Double Shot doesn’t provide more entertainment. While there are definite improvements over Bubble Bobble Revolution and its dismal New Age mode, as a whole the game feels like busy work and isn’t much fun. While Revolution had its serious issues, at the very least it had the original game so it was somewhat salvageable. Double Shot can be safely passed by fans of the series without missing anything of note.