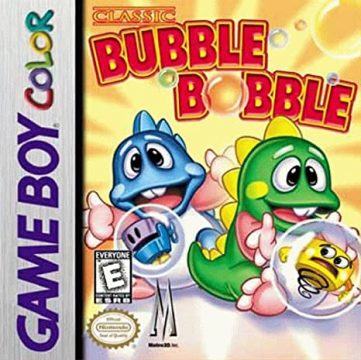 Continuing the Game Boy version’s tradition of misnomers, Classic Bubble Bobble isn’t a port of the original arcade game for the Color. Instead, “classic” refers to stripping Bub of his charge bubbles, hover ability, and health points while also eliminating the “stronger” enemies that had to be damaged with bubbles. It’s also more like the “classic” game boy game in that Bub’s sprite is identical to that version along with many of the enemies he encounters.

The only large change in this version is the ability to travel to alternate stages at certain points in the game. After defeating every enemy a door may appear in certain stages. Entering the door places Bub on a different track of stages, while waiting for the door to vanish enables Bub to follow the current track he is on. While this technically provides some replay value, Classic Bubble Bobble’s faults will likely keep players from wanting to explore them all.

Like every other Game Boy Bubble Bobble, stages are often so large they have to scroll to see everything. Players can no longer pause and scroll around the stage to see where everything is, which often means off screen enemies will suddenly collide with Bub resulting in a cheap death. The game is also extremely slow and Bub handles very poorly. Hopping into the air results in a very slow descent, making Bub extremely vulnerable to faster enemies. Mighta enemies also shoot projectiles the instant they see the player, and with Bub’s sluggish controls this often produces a quick death. On top of that, some enemies can inadvertently clip through walls a defeat Bub instantly. All of these annoyances, along with the music cutting out when there are too many sprites on screen, makes Classic Bubble an utter slog to play.