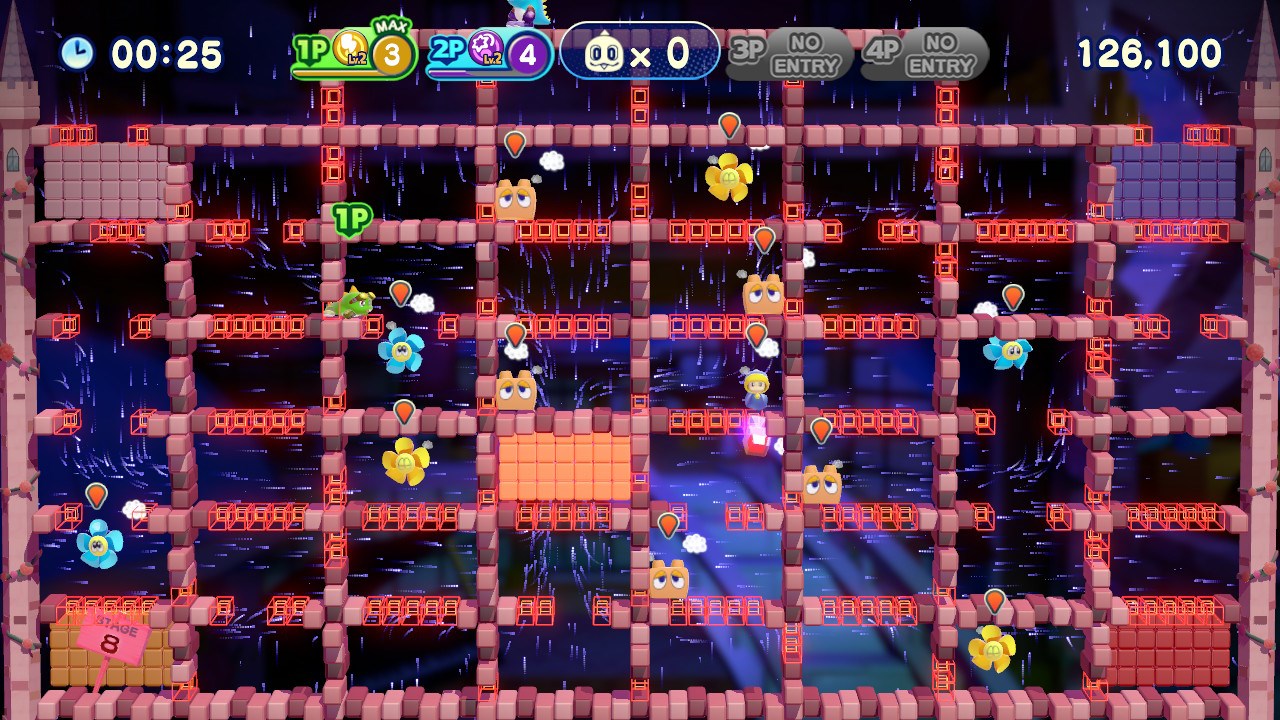 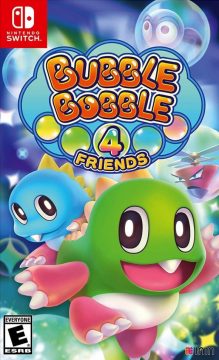 Bubble Bobble 4 Friends doesn’t waste much time getting straight into the action. Both Bub and Bob are the favorite toys of their owner – an unnamed child whose room the game takes place in. Drunk (now Bonner in western releases) hates their status bitterly and sets out to antagonize Bub and Bob and cause mischief in the room once a mysterious light brings all the toys to life. It’s up to Bub and Bob, along with Peb and Pab, to charge through 50 levels and stop Drunk’s nonsense. It’s worth noting Bub and Bob’s origins are a major departure in this game, as they were young boys in previous games who had been transformed into Bubble Dragons. 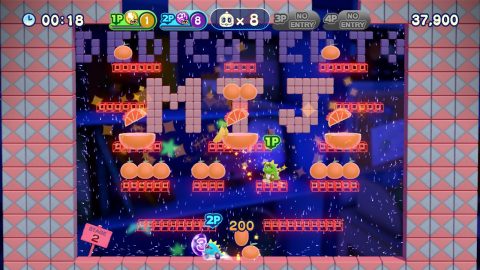 Whereas most console entries of Bubble Bobble gradually became single player affairs, 4 Friends does its best to return to Fukio Mitsuji’s original vision of a cute game based heavily in teamplay. Most of Bubble Bobble’s cryptic gameplay has been stripped out in favor of making 4 Friends a lightweight, pick up and play experience. There are only 50 stages in the main game, and each has been separated into 10 level worlds with a world map separating each. Players can jump into the arcade original Bubble Bobble at any time as well, though there’s an odd degree of input lag that may hamper the experience.

All items have been removed from the game and replaced with equippable gear that is rewarded after clearing each world. Most of the gear are copies of the old Bubble Bobble powerups – such as gear that extends the range of the players’ bubbles and one that enables the Bubble Dragons to fire thunder bubbles at will. A few others are brand new; the bomb gear fires a timed bubble that detonates in a large explosion, while the dash gear enables players to dash through enemies and hazards without being harmed. Losing a life doesn’t result in a loss of the gear, fortunately, but each can only be used a certain number of times before needing to be recharged with fruit point items. This often means that fruit – and diamonds and crowns if you’re really good – need to be shared among all players so they’re charged and ready for the next stage. Most stages in each world have E-X-T-E-N-D bubbles that, when all are collected, upgrade the available uses of the gear collected at the end of the stage. This is particularly critical for the powerful thunder gear, as it only offers a single use without an upgrade. Another major departure is collecting all letters doesn’t instantly end the level as in previous games. Instead, players aren’t awarded until they’ve defeated the boss of the world. 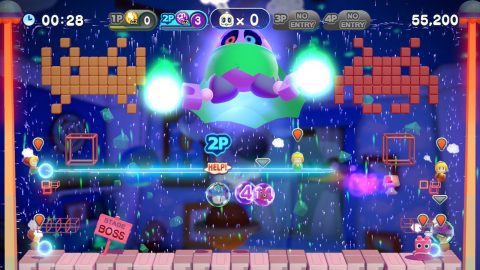 Bubble jumping returns, but has been greatly simplified. In the past players needed to hold the jump button and beware of narrow corridors that could easily pop bubbles. In 4 Friends, players can simply jump on a bubble and will then automatically short hop on it until jumping off. Narrow corridors have been removed as well, eliminating the need to make pixel-perfect positioning and bubble firing to climb tall shafts.

Although bubble jumping has been simplified, capturing enemies in bubbles has a strange degree of jankiness to how hits register on enemies. Bubbles have such a specific hitbox that, even if it looks like the edge of a bubble brushed an enemy, sometimes it will not. This often leads to unnecessary hits on the player and cheaply lost lives. The game even seems to lean into this at times, with some stages lifting the players just a few pixels higher than an enemy, making it impossible to trap until you climb down to their level. 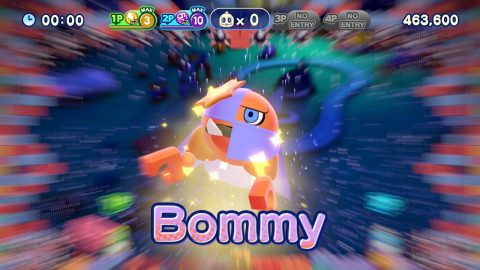 Boss fights, which have long been a sore-spot for the series, have been greatly improved in the main game. Bosses now have easily readable attack and movement patterns, requiring simple strategy to overcome. None of the bosses in the main game are particularly difficult given the ample space and available platforms players can maneuver on, save for the boss of world 3 which is a mess of explosions, obstacles, and a single enormous kill-box.

Players now share a pool of lives, with an additional life being awarded at the beginning of each new stage. Getting hit by an enemy no longer spells instant doom for players. Once hit, the player becomes encased in a bubble and can be released by another teammate if they can reach it before it bursts a few seconds later. This encourages players to not only go out and try to clear each stage as quickly as possible, but to also keep an eye out for their friends.

Finally, air currents – which was one of the more mystifying elements of the series – can now be viewed. Players can jump into the options screen and turn on a visual element that shows how the air current moves in each stage, as well as control the intensity of the visual effect. 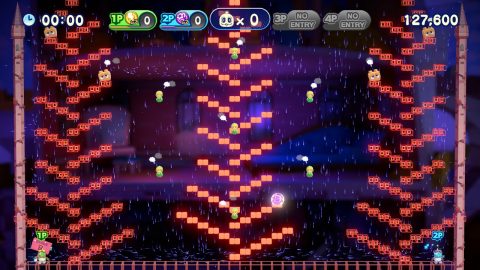 While these efforts do make the initial 50 levels the most accessible they’ve ever been in the Bubble Bobble series, there are certainly some missed opportunities. Although each player’s strategy will change slightly based on the gear they are equipped with, it’s not quite the same as having individual character statistics that Bubble Symphony offers.

Accessibility goes out the window once players challenge hard mode, which remixes the original 50 stages and places all enemies in a more aggressive “enraged” state. The initial few stages of hard mode seem simple, but by world 3 some stages feel borderline unfair as enemies fill the screen with glowing projectiles. It’s almost as if the developers wondered what it would be like to envision Bubble Bobble as a bullet hell game, and then turned it into one without any of the critical nuance found in a shoot em up.

For all intents and purposes, 4 Friends is a successful return to form for the series given how awful previous releases were. The teamplay aspect can result in amazing maneuvers where players each support each other; some may run through the stage trapping enemies and letting them float to a single point, where another player launches a well-timed bomb bubble whose explosion clears them all out instantly. Other players may perform daring, skilled acts with well-timed bubble jumps before ending in popping a thunder bubble, which unleashes a screen-wide bolt of lightning that clears a line of enemies and saves a trapped player. Moments like these are what 4 Friends is really about, and it’s clear this would make a great game to showcase in a speedrun setting.

The major problem with the initial release of the game is that it’s only 50 levels (plus the hard mode variations), which nearly all players of all skill levels will complete in the span of a few hours or so. This is made even easier by the elimination of the hidden timer that enraged enemies in prior games. Players are graded at the end of each world in a mobile-esque three star system – which adds a slight amount of replayability – but only the most dedicated players will concern themselves with it.

Luckily this was fixed with an update released in late 2020, subtitled The Baron is Back. This version doubles the amount of stages (for 200 total), and sees the return of Baron von Blubba (AKA Skel-monster in Japanese), the invincible enemy. Also newly added are online scoreboards, though co-op is still local-only. This version is the only release for the PlayStation 4, though all of this extra content has also been patched back into the original Switch release for free.

Hopefully 4 Friends encourages Taito to continue working on the series and focus on releasing a truly excellent sequel. This newest entry is a great point for those who have never played a Bubble Bobble game before, and there’s more room for improvement should Taito decide to flesh the next entry to its more complicated roots.