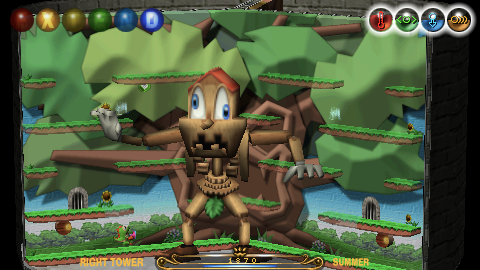 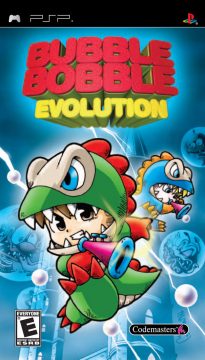 The only Bubble Bobble released for the PSP can best be described as vaguely Bubble Bobble-esque. In an effort to improve the classic formula, Evolution enables the player to control Bub and Bob – who are now children dressed up as bubble dragons blowing bubbles using trumpets – as they scale two separate towers simultaneously. Hitting the L button switches from one brother to the other, with each climbing their tower independently. In some cases what one brother does on their tower can affect the other, necessitating some coordination.

The towers themselves are an interesting idea. Each floor contains three sections, and each of these sections has their own layout and theme. Evolution attempts to mimic the classic formula by making some sections action-oriented while others are more puzzle focused. Evolution also recalls the original by including your typical E-X-T-E-N-D bubbles, items to empower your bubbles with lightning, and screen clearing book items that flood the section of the floor you are on.

There are a ton of new gimmicks, such as switches that unlock doors, pipes that transport you to different areas of the towers, and beans that sprout into plants that can be climbed, and much more.

While Evolution has several neat ideas, it ultimately results in an incredibly busy experience that becomes more frustrating over time than fun. Opening doors requires players to burst bubbles on switches, which unnecessarily slows the game down. The number of switches and gimmicks you need to interact with to traverse each floor makes for plodding gameplay, which runs counter to the original Bubble Bobble’s short, snappy floors. Trying to solve puzzles while manipulating switches and interacting with the environment makes Evolution feel like an entirely different game when compared to the other entries in the series.

Evolution suffers from a number of issues as well. Switching between brothers prompts a loading screen which slows the experience down further, the controls are sluggish, and popping bubbles is unnecessarily difficult as players must push against them for three to four seconds before they burst. As usual the spines on the back brothers’ suits can be used to break bubbles instantly, but blowing bubbles into position and then trying to break them with your back isn’t easy.

The presentation is also particularly unimpressive. The graphics are muddy polygons that really don’t take advantage of the PSP’s capabilities, the enemies are ugly, and Bub and Bob’s character designs are off-putting. While the music isn’t offensive, it also isn’t particularly fun to listen to either, make Evolution even more dull. 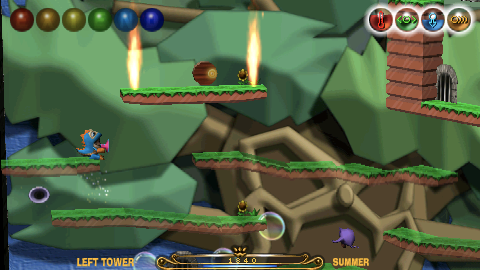 Ultimately Bubble Bobble Evolution plays like someone created a game, reviewed what Bubble Bobble is, and then sideloaded that game with Bubble Bobble characters and power-ups. While this wouldn’t necessarily be a bad thing, Evolution’s presentation and drawn-out gameplay makes it an easy pass for fans.