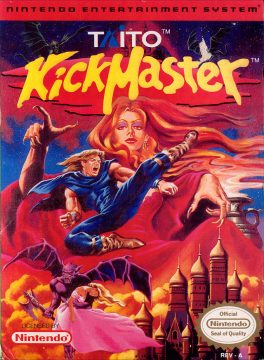 In a grim fantasy setting, the kingdom of Lowrel is assaulted by undead monsters sent by the vile sorceress Belzed. The king and queen are killed along with almost all of their guards, and their only daughter, Princess Silphee, is kidnapped. The only two soldiers left are Thonolan, a young martial artist, and his older brother Macren, who is unfortunately slain by one of many skeletons in Belzed’s army. Thonolan is the only one left to stand against Belzed’s great evil, and he takes on the forces of darkness completely unarmed. No, this game isn’t Sword Master (although that is a rather interesting game in its own right), but Kick Master. And how is Thonolan going to obliterate all the ghouls running about? With his mighty legs, naturally. That probably sounds like the dumbest setup ever, but it sort of brings about a cheesy charm to the whole thing, as if it were a Jean-Claude Van Damme film put into NES form 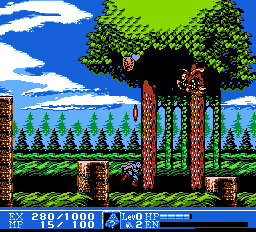 KickMaster is a dynamic game meant to grab the eye the instant you start it up, with the title screen heavily squished at the beginning before suddenly expanding to reveal its visual glory. The graphics are among some of the most colorful you’re likely to find on the NES, fitting with the sort of dark fantasy theme running with the setting. Many areas are brightly coated in vivid sky hues or gloomy building walls, generally looking increasingly darker the farther into the game you go. One of the most impressive areas is stage two, an ominous cave where the background is rapidly glowing with foul luminescence to reveal corpses tied up to the rocky pillars. Stage six, with its dusk sunset cast on water with surprisingly fluid wave effects, is also a memorable level, and nothing in the game looks at all bad unless you have any protests against the color purple.

The sprites themselves are also well-animated and crafted with lots of different monsters for you to kick apart, ranging from basic skeletons and goblins to gargoyles, knights, odd bipedal armadillo-esque things which roll at you, and other such horrors that impede your path at every step. The only veritable problem is with the inconsistency in depicting Thonolan, where the opening cutscene has him as a red-headed kid, his in-game sprite seems to have him with blue hair (or possibly a head covering with the same color as his garments), and he looks like a blond grunge rocker when picking up a new magic spell. Our hero’s varying appearance is simply a chip in some otherwise shining armor. 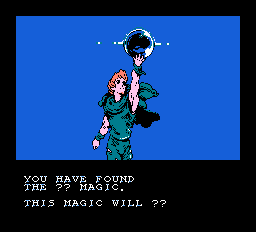 There’s also some great sound design to boot, particularly notable for making heavy use of percussion on the NES’s sound chip. Your ear will likely be immediately seized with the somewhat foreboding yet dramatic first level tune, and it just gets better from there on out. When the music’s not creepy, it’s rejuvenating; from the moody glumness of the second stage music to the raw badass mountain-fighting sound of the fourth, and naturally the evocation of dread brought about by the boss music, there’s just a heck of a lot to like with the audio design. A personal favorite bit is the short fanfare for every time you find a magic spell (once again, more later), where an ungodly rapid amount of drum beats signify your triumphant acquisition. It can’t really be placed in any wholesale genre, but nertz to the genre; it’s there and it’s good.

The game itself plays out somewhat akin to Castlevania, where your goal is to wreck each stage’s end boss and work your way up to Belzed’s tower. However, the graphics, physics, and sound are heavily reminiscent of other KID games like Low G Man and the two NES G. I. Joe games. Each enemy you kick apart explodes in a burst of three randomly-determined items, two of which fly out to the sides. It is not always easy to snag all three items in one jump, so you may have to prioritize depending on your immediate needs. You also have to be aware, as not unlike Low G Man, these items may occasionally include a skull which drains your life if you accidentally snag it. There are also crystals which earn one hundred points which are generally advised to ignore unless you care about score. Everything else is advised to take, including hearts which up your lifebar, potions which restore your magic bar (more on this later), and bonus lives.

However, the most important items are arguably those which raise experience points, an element which makes KickMaster into something of an action-RPG. There are small orange shields which get you ten points, medium-sized round shields with bestow thirty points, and large not-round shields which gain a meaty fifty points. You will naturally want to focus on these parts as soon as possible, as leveling up not only raises your overall lifebar but gives our hero more kicks by which to destroy the enemy. 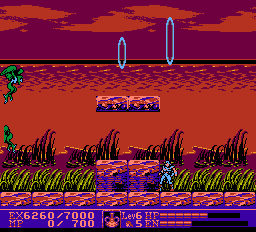 To start, Thonolan only has three different kicks: The basic standing high kick, the crouching sweep kick, and the vertical press kick for aerial enemies. As you gain more experience, your moveset expands by one more for each level gained. Arguably your most useful kick comes right at the first level, the almighty knee drop, an incredibly quick and powerful straight-down dive that will serve you well throughout the entire fight. Level two gives a sliding kick which is useful for evasive purposes, but beware using it around any pits. Level three earns a double front kick which is hard to aim but hits hard, and level four turns your default high kick into a roundhouse kick worthy of Norris. Level five awards a flying kick which hits hard and allows for great air mobility, level six brings a double butterfly kick as your default attack which gives you good protection, and the highest level seven’s blazing flip kick just has to be seen to be believed. The variety of attacks you get is indeed impressive, well-above the level of Simon Belmont or Ryu Hayabusa, but Thonolan isn’t without his secondary abilities as well. Simon has holy water, Ryu gets windmill shurikens, and Thonolan can use magic.

At the end of every stage, you’re guaranteed to earn a new spell, but some levels contain hidden magic icons that sometimes require you to search around the level. It’s not usually too tricky to find them, as most levels simply move from left to right save for the second, third, and final levels. Some spells are reasonably useful, like the lightning spirit attack which rains down electric bolts from the sky, and others are fairly useless like the Magic Boots spell, which protects you from harmful ground terrain of which there is very little in the game (not counting pitfalls). Then there are the Life Up spells, which are what you’ll likely be using 96% of the time due to how simple and useful they are. The first one recovers two bars of life for sixty points, and the second one you later gain is worth four life bars for a whopping ninety points. Both of these spells are costly, but considering how health pickups are a bit scarce compared to most other items, it’s useful to build your magic up in case you need a quick heal. 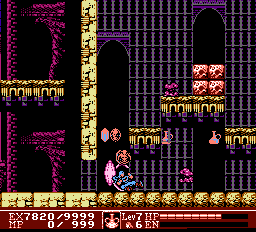 That’s not to say some of the other spells aren’t useful, but life is of utmost importance in this game due to its fairly high challenge curve. It starts out reasonable for the first couple of levels but things soon get pretty rough once tougher enemies (several of which are able to fly) hunger for Thonolan’s blood. Your attack range is usually a bit short, unsurprisingly so due to your choice of weapon, so it is in your best interest to collect shields from enemies and gain more offensive abilities.

While there are some pitfalls here and there, KickMaster does not go overboard with their implementation, thus making the challenge at least somewhat less cheap. Still, if you die and lose all your lives, you must start at the beginning of the level and you lose all of the experience you gained up to that point. You can thankfully continue infinitely, and there’s even a password system to ensure that you don’t lose your progress if you quit for the time being. KickMaster is a bit less overall difficult than its contemporaries like Castlevania III and Sunsoft’s NES Batmangame, but it definitely is no pushover either, yet the game does encourage room for improvement rather than dump on you every chance it gets. You’ll need all the practice you can get to tackle the game’s numerous boss fights.

Every good action game often has challenging boss fights to go along with it, and KickMaster does not disappoint. Most levels often have two bosses to take on, ranging from a Death-esque necromancer who summons enemies from the ground, a terrifying bat-winged demon that blasts down lightning, and twin harpies that attack you with Gradius-style ripple lasers. There are at least two ridiculously huge bosses that are pretty impressive to behold; namely, a large woman riding a half-dozen hellhounds (likely based on Scylla, a beast from Greek mythology) and a massive octopus which attacks you on, where else, but a pirate ship! They’re not actually animated (except for rising up from the background), but they just look really impressive, and you can’t attack them until you destroy their appendages (wolves for Scylla and tentacles for the octopus). Most of the bosses feel manageable even if your attack range is often a bit short, but the new kicks you learn often do well in foiling the big guys. The only exception is the finale against Belzed, who is obnoxiously cheesy. Her pattern is technically pretty easy to distinguish, but it’s just hard to hit her without taking damage yourself. 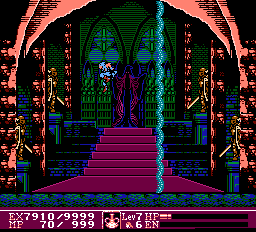 Frustrating finale aside, there’s a heck of a lot to like about KickMaster. The game looks and sounds delicious, it plays very solidly, and the slightly goofy premise is just made awesome by the leveling system. It may not be the most original game, KickMaster is still an excellent action game that never really got a chance to shine. Like most of KID’s games made for Taxan, KickMaster did not even get a Japanese release, making it North American exclusive. Regardless, it’s quite good. Whips? Swords? Guns? Bah. Only master kickers need apply here!