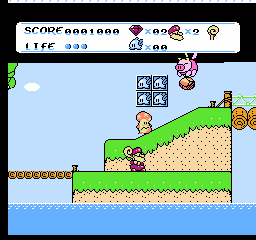 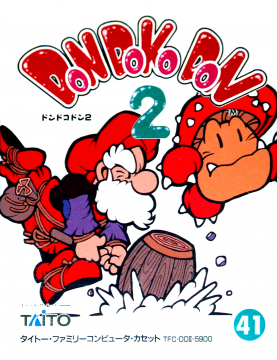 Many people that are familiar with Taito and their games widely consider the 1990’s to be their golden age. Whether it be on the arcade or console front, almost all of the games that Taito put out on both fronts were of very high-quality, with a lot of these games being enjoyed and well-remembered by many to this very day. Some of these games, however, weren’t even made by them. They licensed out some of their games to Natsume, who then proceeded to make some follow-ups to them which many argue are the best games in those series. The two most well-known examples of this are both Pocky & Rocky (Kiki Kaikai) games and The Ninja Warriors Again. However, there’s one example that’s rarely talked about, perhaps due to its Japan exclusivity, and it’s Don Doko Don 2.

Developed by Natsume, and published by Taito in 1992, Don Doko Don 2 is the sequel to Don Doko Don. The plot of the game revolves around the Prince of Merry Land being turned into a frog by an unknown force during his wedding, and it’s up to Bob to find the ingredients for the antidote (which are scattered across 5 worlds) to turn him back into a human. Don Doko Don 2 has experienced somewhat of a genre shift from the first game, changing it from an elimination platformer (a la Bubble Bobble) to a more standard side-scrolling platformer game. Like the first game, Bob still has his hammer, and can still use it bonk and chuck away his enemies (however, he cannot jump on enemies like Mario). This was for the best, as while the original game was a solid, if unoriginal take on the elimination platformer subgenre, this brings on more ideas for originality, specifically with the hammer weapon in general. Not only does Bob have more ways to use his hammer than just bonking enemies with it, he also has new powerups for his hammer, including, but not limited to, a staff that throws fire. The hammer is also key to solving some of the puzzles in the game.

As it was developed by Natsume, it absolutely shines in terms of graphics and sound like most games from them, and the overall technical prowess of it blows the Famicom port of the first game out of the water. The graphics, while not exactly comparable to 16-bit games, is definitely one of the better-looking games on the system, and it shows on the various backdrops. Some of the bosses look really nice as well. The soundtrack is equally good, while filled with nice original songs, also has some nice remixes of songs from the original game, the boss theme in particular. There’s even a couple cute callbacks to previous games from Taito, one being the medals that help gain extra hit points being embroidered with Mr. Chack’n from Chack’n Pop, plus the Worm enemy from The Fairyland Story appearing in one section of the first level (although Worm was also in the first game, to be fair). 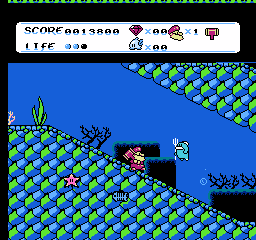 However, the game is not without its issues. The game is fairly easy, unlike its predecessor. While this may not be an issue for most, it might turn off some hardcore platformer game fans. It also gives out three continues in total, and while the continuing system is fairly reasonable (it starts back at the last saved checkpoint with the score wiped), it wipes gained hit points from the Mr. Chack’n medals when continuing. Again, it might not be an issue to most considering the difficulty and overall shortness of the game, three chances before one is kicked back to the very beginning of the game is a little mean. There’s also no save or password system whatsoever, and a feature like that would have been appreciated, given the fact it was such a late release into the Famicom’s lifespan.

Overall, despite its brevity and somewhat easy difficulty, Don Doko Don 2 is definitely a hidden gem in the sea of platformer games on the Famicom, and is definitely worth checking out should one get the chance to play it, whether or not they liked the first Don Doko Don game. This game shows that sometimes a slight genre shift is all that’s needed to heavily improve a follow-up of a game. 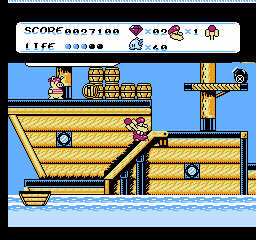 Since the original Famicom release is exclusive to Japan, the dialogue is mostly all in Japanese. While this isn’t too bad since the story isn’t the focus of the game, there are a couple hints that the game gives to complete some of the puzzles, which can be helpful to read. While the game hasn’t received an official English release as of yet, an English fan translation was made several years ago. However, there is a standalone mini-arcade cabinet from MyArcade based on Don Doko Don which appears to use the English fan translation but scrubs out the credits. Boo!