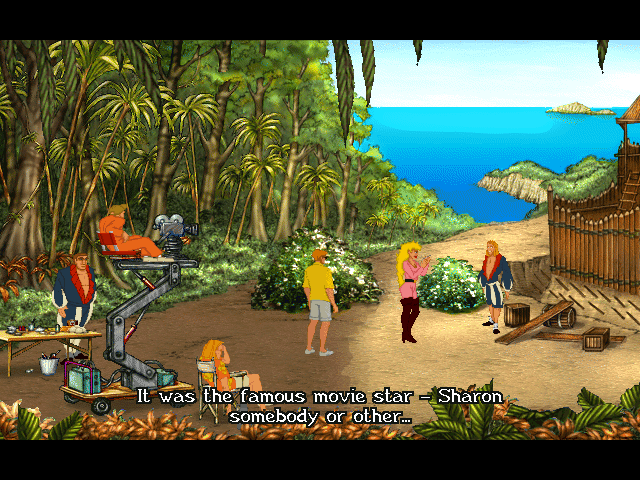 Broken Sword II: The Smoking Mirror, was released just a year after the original. The graphics and engine are more or less the same as its predecessor, although the item text pops up when you highlight an item a la Beneath a Steel Sky, and the voice quality is much better. You can also jump to locations by double clicking on an exit, which speeds up movement quite a bit.

Taking place a few months after the original game, George and Nico are invited to the house of a noted archaeologist to examine some fantastic mythical object. They’re greeted at the door by a man who looks less like a butler and more like a hitman. Something is obviously amiss, but before the duo can realize it, it’s too late – Nico is kidnapped, and George is tied to a chair as the house is burnt to the ground. After escaping and chasing some leads, he rescues Nico, only to learn of a drug smuggling ring operating out of South America. This illegitimate operation is actually a cover-up for a crazy evil man named Karzac, who seeks to resurrect the evil Mayan god Tezcatlipoca, but needs to obtain three special stones before the ceremony can be completed. With one stone in hand, George and Nico split up to find the remaining stones, and once again, attempt to save the world. 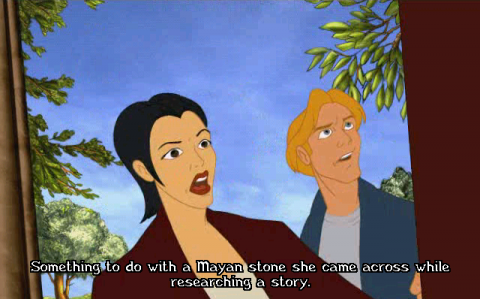 The tone and humor is also much the same, and the writing is still quite excellent. You’ll run into a few old faces too, like the archaeologist Andre Lobineau, who still has a bit of a thing for Nico, as well as Duane and Pearl, who, at one point, help George escape from a South American prison. Later on, George takes off to the apparently dangerous Zombie Island, where he wanders into a clueless movie crew, and during the final scenes, you’re accompanied by a Mayan midget named Titipoco who only has the slightest idea how to speak English. One of the main villains (if you could call him that) is a “ruthless” dictator that’s a bit of a mommy’s boy. Possibly the most amusing part is right before the end of the game – before you enter the final room, the icon text for the entrance reads “Certain Death”.

While the writing and story is satisfying, this sequel still appears to be missing something. Either they took the criticisms of having too much writing to heart, or they just weren’t as interested in Mayan gods as the Knights Templar, but there just isn’t quite as much depth to the plot as before. Furthermore, some major events happen completely off camera, making it seem like the production was rushed and scenes were dropped.

This affects the ending as well. While the final scenes are quite satisfying, you don’t actually “play” any part of them – even less than the original game, actually. The climactic puzzle – where you need to open a door by rotating a series of wheels to match some tiles – is more tedious than it is difficult. 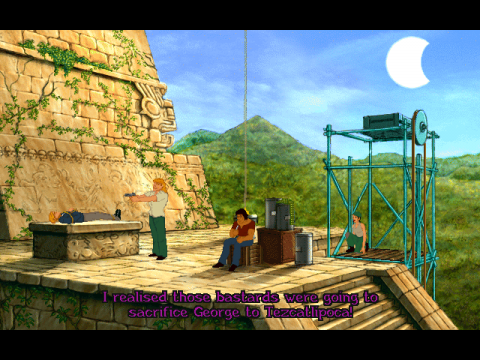 Some of the jokes just don’t seem to work either. Take, for example, the buzzer from the first Broken Sword game. You get it pretty early in the game, and you can show it to practically anyone – the running joke is that George is too incompetent to get anyone to fall for it, but it ends up saving his life near the end of the game. One of the objects you get early in the game is a pair of frilly panties – a gift from Andre to Nico, apparently. It’s used right at the beginning of the game, to open a door during a fire. And for the rest of the game…well, you can show it to people to get their reaction, but there’s no real payoff. It simply disappears from your inventory at a certain point.

In the grand scheme of things, these are ultimately nitpicks – it’s still a fantastic game, and most definitely worth playing. It’s also notable for being the only game in the Broken Sword series to not involve the Knights Templar in any capacity, which makes it stand out a bit more from its peers. In 2010 a revamped version was released for the iOS under the title Broken Sword 2 Remastered. It includes the dialogue portraits like the Director’s Cut of the first game, as well as a hint system, but otherwise it’s mostly identical to the original release.

George: (after showing the dead worm to cat) The cat looked to me as if to say “Why have you brought a dead worm halfway around the world to me?” I honestly didn’t have an answer.

George: (after solving a particularly mindbending puzzle) I’d successfully got the marker into a position near the top of the needle simply by using the kind of lateral thinking that can get you institutionalised.