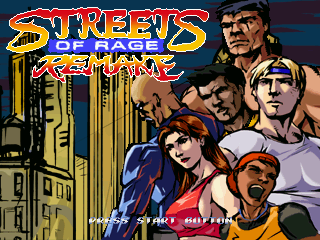 There were several attempts to create a 3D Streets of Rage (including one by Ancient, who worked on Streets of Rage 2), but Sega of Japan couldn’t understand the appeal of the series, as it was mostly popular with overseas gamers. Eventually, a few dedicated fans got together and made their own sequel. After eighl years of development, a small group known as Bombergames finally released their tribute to the series, a testament to their hard work and their love of the franchise…just to have Sega send a cease and desist order to kill it only a few days later. At some point they must have relented, however, as several patches were since released that fixed bugs and further refined the game’s content. 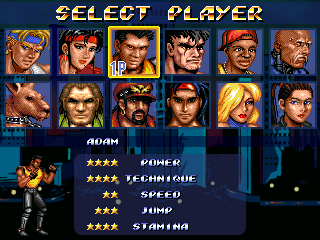 As the name implies, Streets of Rage Remake is less of a new game than it is a blend of the original three games. The first two games are fully represented. The third game isn’t entirely recreated, but most of its areas and setpieces make a reappearance. There’s also new SOR3- style cutscenes between stages, which mostly consists of the main characters interrogating the people they just beat up to figure out where to go next.

The roster features every character who’s made a playable appearance in previous games. Even Adam, who hasn’t been seen since the original game, makes a return appearance with a brand new set of kickboxing based moves. Roo, Shiva & Ash return as unlockable characters, this time featuring fully fleshed out movesets that make them much more viable to play. Several original characters are unlockable as well, including Mr. X himself, Elle, the whip-weilding singer from Streets of Rage 2, and brand new ninja lady Rudra. On top of that, versions of characters from previous games can be played as well, meaning SOR1 Axel can fight alongside SOR3 Blaze, and these past versions still have their own full set of moves. 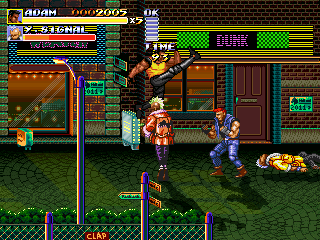 On its default settings, the game plays exactly like Streets of Rage 3, with every character getting all the new features like dashing, Blitz attacks, and special weapon moves. Remake also reintroduces the police call special, now mapped to its own separate button. Unfortunately, that has afew more limitations this time around, as any place a police car or helicopter logically couldn’t enter means the move simply won’t come out. However, an assortment of options can be tweaked and features removed or unremoved, allowing you to make the game play as much or as little like Streets of Rage 2 as you desire. It’s a game that definitely expects you to be familiar with both games to understand just what all the options do, which can be somewhat intimidating for new players.

From the start, you get six different characters to select from, gathered from across the entire series. Adam even makes his first appearance since the original SOR, and he even comes with a brand new set of moves to help him fit with the rest of the cast. The rest of the cast gets an upgrade, as well, with most of them getting new moves they can perform with or without weapons in hand. In terms of weapons, everything you could use on your opponents in the original games are here, although the beer bottles and salt shakers are sadly restricted to the SOR1 path. You can even find the occasional firearm, like uzis and bazookas, and while they aren’t incredibly common, they’re pretty fun to use. If something about the idea of the SOR folks using guns displeases you, however, you can disable their appearance at any time, leaving them in the hands of the bad guys.

Once you’ve made your choice of character, you’re presented with four different routes to take through the game, each with their own set of levels. Every so often, you’ll be presented with a choice of paths to take, which will further diverge from the usual path presented. If you stay on the path, a couple of the paths are generally faithful recreations of the original games. There are some differences, however — in the first stage of the Streets of Rage 2 route, a sniper will appear from the window and take a shot at you. This a reference to a gunman on the original game’s cover who was never seen proper, much like the guy in the hockey mask who also makes a handful of appearances. 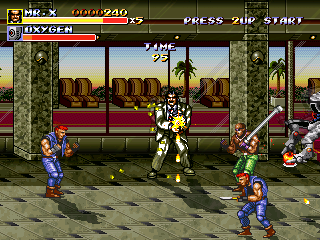 The original routes have their own share of interesting additions, as well. There’s a few stages where few stages where you ride a motorbike or jet ski, reference segments that were cut for time from a third game. These sections are short, but not overly difficult, and add some fun variety. One route calls back to the timed segment from Streets of Rage 3, only this time you’re seeking out several bombs before they take out you and the Syndicate building you’re escaping from. There’s several endings to find, some of which come from the original game, with others being brand new — most of them ending poorly or unsatisfyingly. Beating the game also puts points towards a shop, where an assortment of new modes, characters, art, and cheats of varying usefulness can be earned.

While most of the graphics have been kept relatively authentic to the original games, there are a lot of parts where things have been touched up, or even redrawn entirely. This is most noticeable in the levels that you’ll see on the SoR1 path, which had extra details added with their respriting to help them fit better with the backgrounds seen in later games. There are also a few extra visual touches added like lighting effects and transparencies. Character sprites are somewhat of a mixed bag, however. Most characters look great, but Adam doesn’t quite fit, and Rudra is an obvious edit of Shadow Yamoto from Eternal Champions. It’s forgivable, considering the small team and even smaller budget, but it does tend to stick out. 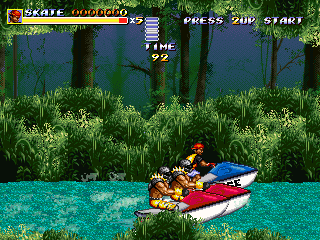 Certain other additions also feel somewhat off. Along with the usual weapons, the characters can now use firearms, which some series purists might feel uncomfortable with. Such weapons can be disabled, as can the effect where enemies can be gorily sliced in half. Keeping these things on makes the game feel a lot more like Capcom’s Cadillacs & Dinosaurs — which may be a plus or minus for some. The music, however, holds up nicely. Most of it is remixes from the previous games, making use of modern synths and the talents of a variety of composers. A lot of it is fantastic, and the massive OST even includes unused tracks and a composition from Super Adventure Island. 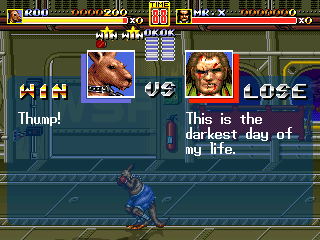 Overall, even despite some minor flaws, Remake is a fantastic tribute to the series and everything in it. To be sure, it’s a game for fans first and foremost — newcomers might feel a little intimidated with the sheer amount of content and options available. Despite this, it’s a surprisingly professional piece of work, the circumstances it was made under. It’s a very clear work of passion, however, and one that served more than admirably to keep the series alive with fans until the long awaited release of its fourth game. It’s also free and available for an assortment of systems, which makes it a very easy sell. Once you’re finished with the original game, a variety of mods made with the game’s level editor await you, from new stories to recreations of other beat-em-ups entirely.