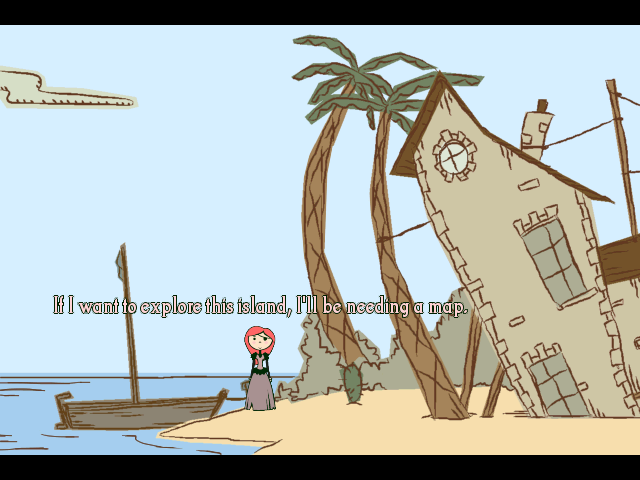 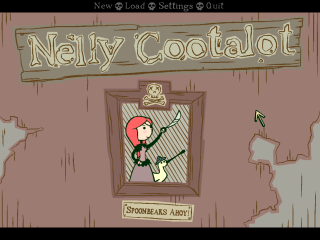 Something really interesting about point and click adventure games is that the usual skill ceiling for developing them (coding, level design, etc.) is lowered significantly, allowing people who normally wouldn’t step too far into the gaming world to give it a shot. Enter Alasdair Beckett-King, a British filmmaker and animator, now professional comedian, and game developer. That’s a pretty varied skill-set by all means, and he has a good grasp on all of it. Around 2007, when he was starting to release amateur film projects, Mr. Beckett-King also released a little freeware game that he revisited years later in a successful kickstarter. These two games became the Nelly Cootalot series, point and click comedy games about a spunky pirate girl finding treasure and helping innocent animals kidnapped and used for evil.

They’re not the most inventive games, but they’re well designed and certainly have a charm all their own. On top of that, they’re labors of love, originally made for the creator’s girlfriend, and that love shines through. 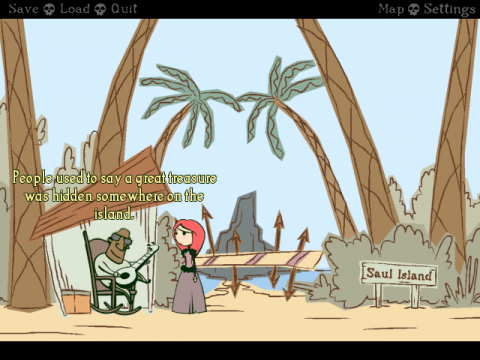 The first game in the Cootalot series, Spoonbeaks Ahoy!, was a low budget freeware release developed in Adventure Game Studio, with a sketchy art style not far removed from the Ben & Dan series. Janky characters, simplistic colors and world design, very basic animation, all the marks are there. Despite, the game carves out its own identity pretty well through the script. You play as Nelly Cootalot as you explore the Barony of Meeth and try to find the missing spoonbeaks, a breed of bird that has mysteriously disappeared from the islands, tasked by the ghost of famous pirate Bloodbeard. Along the way, you have to foil the plans of Baron Widebeard, the barony’s leader and general not very nice guy. Comedy ensues.

Things are very traditional here. You click to move around and interact, collect whatever isn’t nailed down in case it becomes important later, and talk with wacky characters along the way, like depressed leprechauns and viking traders trying to get you to by an iHook. It doesn’t take any chances here, though a few controls are kind of strange and may require a look-up in the online manual. You have to move the cursor close to the edge of the screen to make the inventory disappear so you can use a selected item on something in the world proper.

Despite the humble origins, the game is a good time with as short as it lasts. Every area has a good variety of characters and quips to find, and there are some just inspired and strange ideas peppered around. For example, Widebeard’s henchman is El Mono, a mute monkey shaman on a magic carpet with a fear of oranges. Also, the monkey is a stuffed animal. The humor takes a lot from the works of Monkey Island, but a bit less crude and biting and more silly and inviting. It never goes too far into a rough tone, instead aiming for silly pointlessness. It’s like the plot was written via a Mad Libs book, but in a good way. It’s a child’s idea of a story with a tad more structure, and there’s something inherently amusing about that.

That charm goes a long way. The game only takes about two hours to finish, but it leaves on just the right note and it avoids puzzles that are too tricky or maddening. It’s just a solid little game that works great as a prologue for things to come from Mr. Beckett-King.