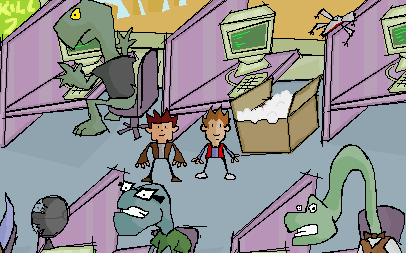 Even though Sierra and LucasArts gave up on adventure games around the turn of the century, many other outfits tried to pick up the slack. There are numerous other purportedly humorous games to come out of Europe, like Runaway, Ankh, Jack Keene and others, but more often than not, they fall flat on the faces. As such, games that replicate the feel of old LucasArts games are exceeding rare. Sure, Tim Schafer’s Psychonauts and Brütal Legend were both hilarious despite not being adventure games, while Telltale Games, formed with some of the other LucasArts staff, comes close to the glory days of the genre. But for a variety of reasons, they’re not quite the same. 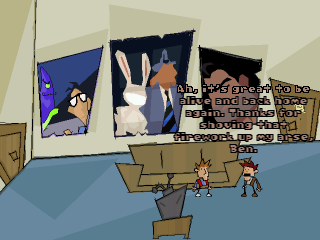 So it was more or less out of nowhere that a tiny group of Brits called Zombie Cow Studios brought out two of the funniest adventures since… well, since ever, perhaps. Ben There, Dan That! and its sequel, Time Gentlemen Please!, are both low budget hits made with Adventure Game Studio and have a graphical style most consistent with elementary school notebook doodles, but succeed tremendously because they’re so brilliantly written. One could call it “The British version of South Park!” and that wouldn’t entirely be wrong, but that’s a glib summation of it. While both creations have uber low-fi visuals, subversive plotting, and more than just a bit of toilet humor, Zombie Cow’s games replace South Park’s libertarian cynicism with a self aware affection for adventure games, LucasArts in particular. They’re loving self-parodies that have their own voice and never copies LucasArts style, despite obviously being in love with them. By the virtue of being independent games that nebulous quality defined as “soul” permeates both experiences, in ways that their prettier, more “professional” comrades sometimes lack.

Ben and Dan are two London flatmates, and quite experienced adventurers. Though both are a bit off, Ben is the leader and the smarter of the two (and the one the player directly controls), while Dan is his partner, dodgy pathfinding routine and all. Dan is acknowledged as being Max to Ben’s Sam, and is controlled via a specific icon for specific purposes, usually flipping light switches or other tasks that Ben deems too gross, menial, or otherwise beneath him. Both the heroes are quite aware of the nature of adventure gaming and, being how it’s essentially a self-insertion fic, fans of the genre itself. There are posters of Maniac Mansion and Full Throttle that adorn their walls. The font is even lifted straight from Day of the Tentacle. 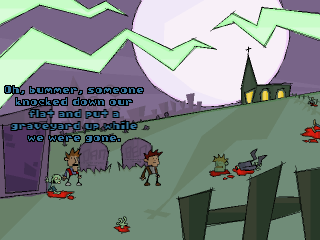 In the beginning, we join our heroes in the middle of a dire situation – Dan has gone off and gotten himself killed, while Ben has rigged an overcomplicated and particularly adventure-game-y contraption that will somehow bring him back to life. Thankfully, since this puzzle comes pre-solved, all you need to do is push Dan to trigger the device, eventually bringing our heroes back to stodgy old England. Desperately wishing to catch the Magnum P.I. marathon but aggravated at their lack of decent reception, they stick a wire hanger out the window, only to be abducted by mysterious aliens.

Left to their own devices aboard the spaceship, Ben and Dan discover a series of doorways that lead into different parallel dimensions. In one, you’ll find a land overwhelmed with a rampant zombie infestation. In another, you’ll enter a video game development studio populated by dinosaurs. In yet another, you’ll find a land where England has been annexed as the 51st United State of America, where the local population complains about the crappy beer and lack of proper footie, while a group of washed-up, self-important video game journalists complain about lousy games and scheme to destroy the world. And then there’s the dimension where everyone has their own, mostly marginal, super power. Somewhere along the line, the developers just got tired and tacked on typical fire and ice worlds. Each of the doors leading to these dimensions is initially closed, and can only be unlocked by finding some arbitrary item in one of the other dimensions. It’s a very loose, slipshod way of connecting together the whole thing, but it’s suitable given the intentionally low quality graphics. 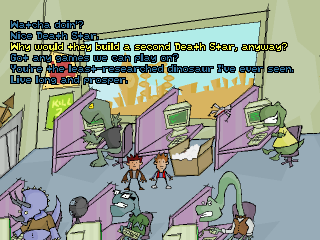 Ben and Dan have definable faces and bodies, but their appendages are sticks, and they animate with two mere frames. The backgrounds are coarse, scribbly, and not at all in proportion. One gets the feeling it’s not entirely unintentional. Yes, this game was done cheaply by two blokes in their spare time, so why not consciously admit it, use it in the game’s favor to carve a completely silly atmosphere, and move on with it?

And so, most of the strength lies in the writing. Ben and Dan are the typical comedy duo, and their constantly self-aware exchanges are what drive most everything forward. Your tolerance level to their ironic dialogue may depend on how many similar AGS games you’ve played before, but it usually still manages to be quite funny regardless. In addition to its particularly British verbiage, it’s also a bit more ribald than usual, and the humor is much more contemporary. Although LucasArts games were primarily aimed at adults, there was rarely anything particularly offensive about them, at least as language, sex or violence was concerned. This game isn’t overwhelmingly dirty, but you can expect occasional exchanges like:

Ben: “HAVING A VERY LARGE PENIS.”

Supergirl: “Oh, that’s a shame. Another of my powers is having a very small vagina.”

There’s also the recurring joke that whatever method Ben uses to further their adventures, they always somehow end up killing (mostly) innocent folks in the process, an amusing aside to the occasionally sociopathic tendencies of adventure game protagonists. It’s also prepared a response for interacting with nearly everything, making the feel quite rich. If there’s a sore point, it’s that the writing is so damn good that it begs to be properly voice acted. Given its status as a freeware game, though, that would be asking a bit too much, and the text-only dialogue does channel the quaint era of 3.5’ 1.44MB floppy disks. As it stands, it’s easy to imagine the two blokes with their off-kilter British accents, slang and mannerisms. Also, other than a few bits of music, the whole game is almost depressingly silent, which runs opposite of the goofiness throughout. 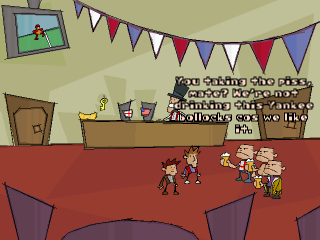 Compared to their obvious inspirations, the puzzles are actually quite easy and straightforward, at least one of which involves activating a fully functional miniature model Death Star. It’s a short game, too, and one that ends on a twist and a pseudo-cliffhanger, nicely leading into its sequel. But it’s all so masterfully executed that it stands out proudly amongst its freeware peers.