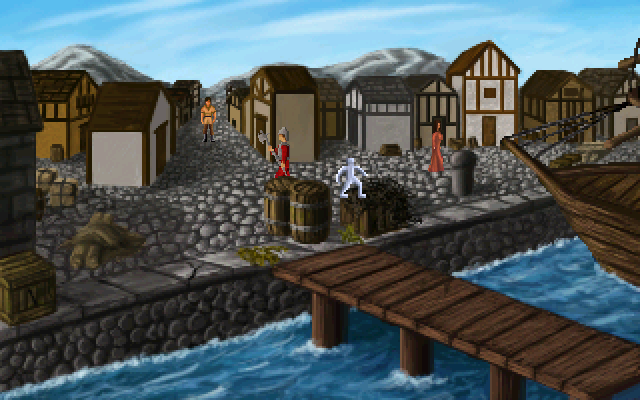 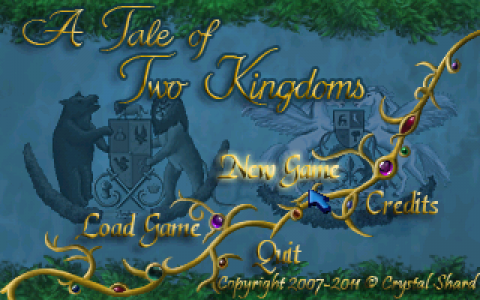 Maeldun Whiteblade, hero of the uprising that stopped the expansionism of King Vortigern of Theylinn, is now a guest in the castle of the latter, who has requested assistance against the common menace of a goblin horde. The king is then killed and Maeldun, framed for the murder, must clear his name, solve the goblin problem and find the evil mastermind that wants to take advantage of the situation. His quest will also bring him to the second of the eponymous kingdoms: Thierna na Oge, realm of the Fair Folk.

While it contains elements from Celtic myths, A Tale of Two Kingdoms is first and foremost a love letter to Sierra’s King’s Quest series, a medieval fantasy tale with many of the ingredients of the genre: the aforementioned goblins, an evil wizard, a good druid, a dumb giant, and so on. The classic Sierra interface is also there: a bar to select actions, inventory and options appears when the cursor is dragged to the upper border of the screen, and actions can also be cycled with the right mouse button. There’s not one, but two different scores, Wisdom and Honor, and some bad actions can cause the latter to decrease. During conversations, characters can be asked to perform actions, like observing objects or giving them to Maeldun. The hero is not afraid of water: he can cross rivers and ponds, and swim in the sea. 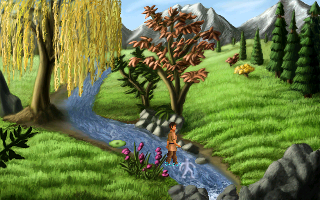 The quality of music, scenarios and animation is not always consistent but most of the hand-drawn backgrounds are little works of art, especially the locations in the woods. There’s even a 3D rendered movie near the end but while it’s relatively well done, it clashes with the rest of the visuals.

What’s most impressive about AToTK is its scale. It takes place only in the city of Carbonek, a nearby village and the surrounding region, yet it is filled to the brim with things to do, and most of the time there’s not even a set order to perform them. Some situations have two or three different solutions, and many puzzles and sub-quests are optional, although some are needed to reach the best of the five possible endings. 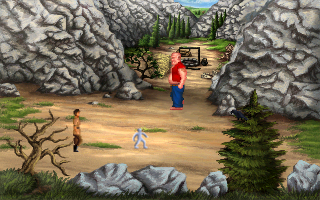 The faithfulness to the Sierra spirit means also the same weaknesses, though: Useful items are not highlighted by the cursor, causing a few instances of pixel hunting, and there are literally dozens of ways to die, each followed by an epitaph in rhyme. For all the non-linearity and content, getting stuck not knowing what to do next is common (no unwinnable situations though, thankfully); you’ll likely have to keep the official walkthrough handy. Still, it this not enough to bring down the game’s many qualities. At the time of release, AToTK was one of the most ambitious projects made with Adventure Game Studio, and it offers a replay value that’s unseen in most adventures.

One final question remains: for all the effort put into the game, did the player character have to be as flat and boring as Maeldun?