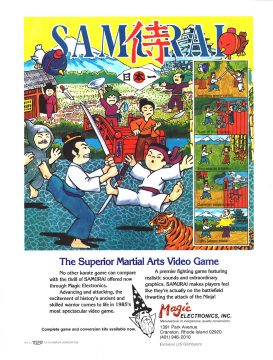 Samurai Nipponichi (also spelled Samurai Nihon-Ichi) translates to “Japan’s Number One Samurai”. A rather cool title, though North American players wouldn’t have known it at the time; the local manufacturer, Magic Electronics, simply called it SAMURAI on its flyers, and it happened to be the only word in Roman letters on the title screen. 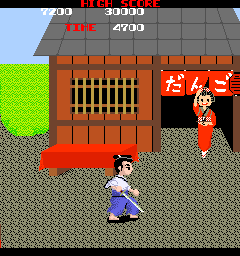 It belongs to a very ’80s genre that has seemingly no set name, that of games like Kung Fu or Black Belt, single-plane side-scrollers in which one walks to the right while fighting off endless waves of enemies who typically go flying off from a single punch or kick. For the sake of convenience, they are often lumped in with beat-em-ups, though they seem out-of-place next to the likes of Double Dragon and Final Fight. While few of those games inspire nostalgia, a handful did rise above the genre’s basic formula. SAMURAI may not be among the better known, but it is easily among the best.

Its appeal lies in the variety and unpredictability of the threats it sends your way, forcing you to both think and act fast in order to survive. It takes the samurai’s kill-or-be-killed ethics quite literally; everything in this game dies in one hit, from the protagonist to the final boss.

It’s also very hard. It has to be, as there isn’t a lot of content there; the game has 4 stages in all, each of which can be traversed in just over one minute. The entire game can be beaten in about 5 minutes, after which it just loops over with more enemies to fight. This short length isn’t so jarring in context. In some ways, arcade games of the late ’70s and early ’80s resembled the casual games of today: both revolve around simple, addictive gameplay, more enjoyable in small doses. SAMURAI was released as action games were transitioning from being all about high scores to adopting the basic structure of fiction, however, so it does have something like an ending sequence. Spoiler: the protagonist decapitates a man, the ultimate show of military victory in medieval Japan. 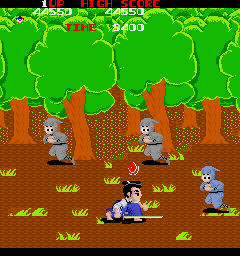 There are two action buttons: one swings your sword upwards, the other downwards. They are not only used to attack, but also to deflect projectiles, which isn’t too difficult timing-wise but requires that you get used to the quirks in the game’s hit detection. The joystick lets you walk, jump and crouch. Enemies come at you from both sides and at various heights, and the key is to properly assess the order and manner in which to deal with them while making your way forward whenever you can. Their placement is random, so it cannot simply be memorized. This also means that chance plays a part in determining the difficulty of any given run. Once per stage you’ll encounter a red bird; killing them rewards you with a power up that renders you invulnerable to projectiles for a few seconds, a true blessing in the second half of the game.

On the default settings, you get three lives for a credit. Rather than having to restart the level when you die, you simply resume from the same point, however you may not put in extra credits to continue. You either beat this game on one credit or you don’t beat it at all.

Things start simply enough. Level 1 has two enemy types. The generic samurai who come at you are not much of an issue, though it’s worth noting that they walk faster than you do. The knife-throwing birds complicate things a bit; sometimes it’s safe to jump up and hit them, sometimes it’s better to just dodge or deflect their knives before the samurai can swarm you. The boss awaits you on a red bridge. Like you, he can swing up or down, and your attacks cancel each other when they clash. With a single hit deciding the winner, it almost feels like a simplistic precursor to Bushido Blade.

The second level, a bamboo forest, introduces leaping tigers and a new type of birds with bow and arrows. As with many arcade games, there exist two different releases of SAMURAI; in the original version, they fly just above the ground, shooting at your feet, while in the revised version they can come at you from any height. With four distinct enemy types mixed up, the action can get pretty frantic, and it’s no longer advisable to just hold forward the whole time. The boss this time fights with a chain and sickle, but is easier to handle as long as you don’t get too close. 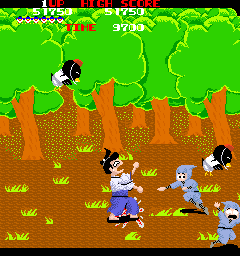 Level Three is where things really get tricky, due to the ninjas that populate it. Some of them are straightforward enough to dash in and throw bombs at you; those are deflected easily enough. The sneakier ones run around in the background, throwing shuriken at unpredictable moments. It’s best to duck under those, but if you stop moving for too long the old knife-throwing birds tend to catch up with you. The boss is a woman with a Naginata, which has a longer reach than your sword and can’t be parried, though it’s also slower.

The final level brings back the footmen in larger quantities than ever before, with both types of ninjas and birds to deal with. It has a midboss, who looks like the first level’s boss in a different-colored outfit. The final boss is a mustachioed samurai in a purple kimono, probably a lord of some kind as he challenges you in front of a castle. He’s fast, but otherwise nothing special. Kill him and his head goes flying off, as it should.

There isn’t much to the music, but the visuals deserve mention. The simple, well-defined sprites and backgrounds have a particular cartoonish charm. You might recognize the style from DJ Boy or other Kaneko games: it’s something like an evolutionary step removed from the super-deformed look, with characters sporting giant heads but otherwise normally-proportioned bodies. In fact, it resembles the samurai and judo manga popular in Japan in the 1950s. One can easily imagine an indie game making use of that aesthetic today.

The game was never ported, not even within the compilations dedicated to publisher Taito for the PS2. Unless you happen to own the arcade board, the only way to play it is through emulation.