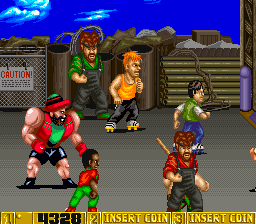 B Rap Boys is a side-scrolling arcade beat-em-up for up to three players, released in 1992 by Kaneko. It is the sequel to 1989’s DJ Boy, which produced an interesting (if often very controversial) take on American street culture through a Japanese lens. It is also notable for having one of the first licenced soundtracks, and it’s quite the banger.

The storyline is typical of a lot of beat-em-ups of the time: defeat a crime boss and his henchmen. Although the game takes place in the same universe as DJ Boy, no characters return. You can now choose from three entirely different unnamed characters: one on a skateboard, the other riding a bicycle, and the last on roller skates, all clad in very 90s MC Hammer-esque trousers. Much like its predecessor, B. Rap Boys features both auto-scrolling and free-roam sections, with the scrolling being a lot faster and smoother than DJ Boy. The graphics have been improved with larger sprites, but have a lot less detail and animation than contemporaries like Teenage Mutant Ninja Turtles, The Simpsons, and the Capcom brawlers. The backgrounds look pretty good and have some nice variation, but there are far few too many different types of enemies, with just a few types of standard thugs and bosses repeated ad nauseum. This lack of diversity makes the game repetitive very quickly. It is also a pretty tough and often cheap and frustrating brawler, and some occasional glitches can cause problems, like the player not being able to turn to face an enemy and enemies sometimes getting stuck behind objects, making it difficult to continue. 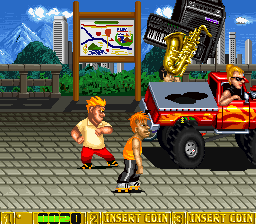 New to the series are weapons that both you and your foes can pick up, including baseball bats, pipes, bottles, burgers, and even a mech suit. Unlike some similar games, an enemy doesn’t need to be directly opposite you to strike with thrown objects, as they home in on your location. While adding to the gameplay, they lack variety to make things really interesting. There is also a new lifebar, although for some reason it is obscured by your score making it hard to read in the heat of battle. You gain an extra life by scoring between 1000 and 4000 points depending on the difficulty set via dip switches, although if it is set to very hard you’re out of luck – no extra lives are awarded, no matter how many points you score. The controls have also been refined – there is now one attack button and one jump button, although the number of attacks has increased, from punches and kicks to elbows to the head and throws. Jumping and then attacking unleashes a flying kick, and pressing both buttons together performs a special attack on your chosen mode of transport such as a kickflip/skateboard dropkick, and a Ryu-esque spinning kick or flying kick (at no cost to your health) if not. If you are knocked off your ride, you carry on wearing roller skates, getting a limited time to mount it again. Similarly to DJ Boy, you’ll be on the receiving end of a lot of pro wrestling moves, from gorilla presses to powerbombs to spinning lariats.

The first level sees you wheeling down a country road, beating on an assortment of thugs behind a flatbed truck carrying musical instruments which try and crush you. Soon you stop at a café and anarchy breaks out – weapons, balloons, and a ton of thugs. It’s here that you begin to see a real departure from DJ Boy, with a lot more variety in the stages. The surrealism and dodgy stereotyping are still here – someone that can only be described as a Mexican boxer appears as the boss. Level two is a rollercoaster ride on logs, as hipster lumberjacks wearing sunglasses throw more musical instruments at you. The log derails, you fly through a theme park, and immediately suit up as a mecha before entering a robot fight. You race through a European-style street in the third level, not only dealing with henchmen but also marauding bulls. Soon you reach a mansion for another face off with the lumberjacks, and end up in a circus stage facing a female lion tamer and two lions. The penultimate stage sees you on a log elevator, and reprises the bosses from the first two levels, before throwing you into a confrontation with two identical punk mechas, sadly without your own suit. After that, it’s a fight with the boxer, lumberjacks, and lion tamer, before a ‘do or die’ fight – if you have more than one player, you will have to face off with one another in a battle to the death. The winner takes on the crime boss in a Mortal Kombat-style arena. You get one life to beat him otherwise you have to start the fight all over again. You’ll need a lot of luck (and credits), as he is possibly the cheapest of all the enemies. 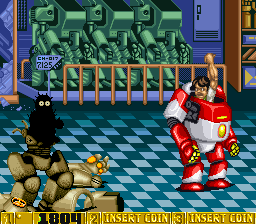 The Japanese version has a few changes, with kabuki fighter and ninjas being added to levels and often replacing the lumberjacks, and the crime boss makes an extra appearance in the first level as a boss. There are some extra obstacles, including rolling logs in the first stage, and a Japanese car turning up and exploding.

While a let down on the graphics front, the sound has seen a big improvement. Most characters have sampled voices, resulting in some amusing smack talk. However, the sampled near CD quality lyrical hip-hop tracks playing throughout deserve special attention. Mainly compromised of tracks by 3 Stories High from their 1991 CD EP (and only release) ‘Famous Last Words’, it is a joy to listen to, and must have really stood out when blaring out of arcades at the time. One of the songs samples The JBs ‘Hot Pants Road’, with another sampling the Fat Boys and Kurtis Blow from the movie ‘Knights of the City’. All in all, it gives a very Jet Set Radio vibe to proceedings. 3 Stories High were comprised of three Americans (DOC, D.O.G, and Peter Gun) and one Japanese member (DJ Koji) and lived in and toured Japan for a few years. Sadly label issues prevented them from releasing anything else. DOC, the lyricist of the four, went on to become a writer, producer, and manager as Doc Clarke, and worked with the likes of Marques Houston, Lil’ Mo, and Murs. 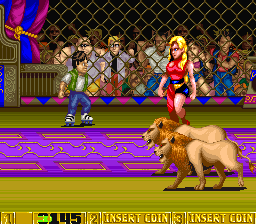 Unfortunately, the game never received a home port. Whether it was issues with the soundtrack, poor sales of the home conversion of DJ Boy, or something else, it is a shame it never made the Sega CD (perhaps with refined difficulty), which would seem to have been a perfect home for it. 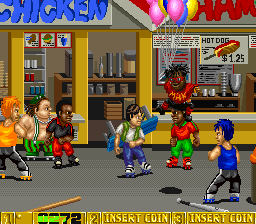 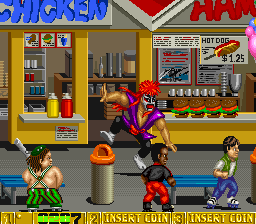