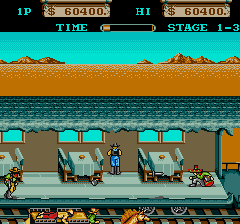 Konami had one of the strongest arcade reputations of the mid-eighties. Who doesn’t know of Time Pilot, Track & Field, Circus Charlie, Gradius, and Iron Horse? Well, maybe not so much that last one, since it never saw a second light on the NES or future arcade compilations. Iron Horse is one of Konami’s rarest gems, an action game that pokes into the underrated virtual theater of the Old West. The premise is familiar with cowboys and outlaws: A myriad of robbers hold up an impossibly long train and take its passengers hostage while looting everything in sight. As either a lawman or a bounty hunter (there is no exposition to indicate which), you take on the heisters via good ol’ Texas justice: I.E., attempting to slaughter the whole damn gang.

The simple goal in Iron Horse is to keep running right throughout the train while putting down and not getting hit by the bad guys. The gameplay actually feels quite similar to another classic Konami actionfest, Green Beret / Rush’n Attack, though there are two major differences. First, you can’t jump, but you can crouch to avoid most enemy fire and hit ducking enemies. Second, there are three planes of action not unlike Treasure’s Guardian Heroes, lending to the game a slight beat-em-up feel. This genre had barely formed in 1986, the same year that Renegade was produced, so it can debatably be considered one of the first beat-em-ups of all time, especially if you choose the third weapon option.

One of Iron Horse‘s most interesting quirks is the option to essentially play the game three different ways. At the start, a moving cursor scrolls over three different weapons: The whip, the pistol, and just your fists. Your arsenal seems to be sorted by ease of use: The whip has good range and can knock out several enemies at once, making it the ideal beginner’s pick. The pistol’s bullets reach slightly longer than the whip, and it’s the only weapon you can fire without having to stop, but bullets do not penetrate enemies like the other two weapons, making it an intermediate pick for itchy trigger fingers. Of course, your fists have the shortest range and are recommended only for experts, but they can lay out several enemies in one punch with a fun domino effect, and pugilists are rewarded with double the points for each hit. The game plays quite differently depending on which weapon you choose, thereby adding reasons to replay more than once.

In addition to your main tools, you can grab subweapons much like Green Beret. Lanterns cause an awesome wave of fire which burns baddies into cinders, bombs nuke almost everything within a ten-foot radius of the blast, and lassos are tossed on all three planes to tie up those ornery varmints. You get these specialities from short men carrying boxes, but the other enemies are obviously not so generous. The mooks come primarily in two flavors: Masked bandits with pistols and bearded thugs with either throwing knives or lassos. All of these projectiles will instantly take you out of commission, though the lasso gets a special animation. Less common but infinitely more infuriating are sombrero-clad jerks who either throw lanterns that burn a segment of all three rows or bombs that roll across the floor. You are unable to duck either of these, so even the savviest of players may lose lives to these cheaters. Later stages add even more jeopardies, like background cannons, cretins who toss dynamite from the foreground, and goons riding hawks that drop bombs from above. 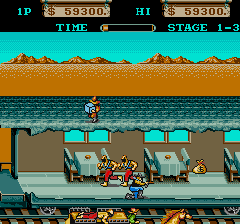 If this sounds pretty rough, then it’s true Iron Horse is tougher than hardtack. The screen can quickly get full of enemies and if you don’t learn the value of ducking early on, bullets and lassos will likely make your quarter useless early on. Even if you know when to duck, the sombrero bombers almost unfairly trip you up while attempting to evade normal enemies. Somewhat thankfully, most stages don’t have a proper boss, instead throwing a large wave of ruffians your way. Up to about ten enemies may be on screen at this time, so it’s a very good idea to use your powerful subweapons if you have any ammo left. If you’re possessed by John Wayne and can somehow make it to the end of the fifth and final stage, you face an honest-to-god actual boss fight with what is likely the bandit leader, a bulky knife-tosser twice your size with a mohawkbeard and an outfit evocative of The Road Warrior. While taking several hits, he can quickly be taken down if you’re fast enough, and it’s best to be quick before the infinite amount of minions that come to his aid overwhelm you.

The graphics were quite solid for 1986, as the train-based setting gives you a constantly scrolling background that rolls through various locales. The music is also incredibly good, naturally taking a few cues from Ennio Moricone and remaining energetic upbeat throughout your locomotive murderfest. However, most of the murders will likely be your own body. Iron Horse is a pretty darn neat concept, but its design is somewhat railroaded by a challenge level that is likely to drive away most potential players. If you think you’ve got the spurs for it, then give this bucking bull a ride and see how long you hold on, but prepare to get thrown off, pardner. 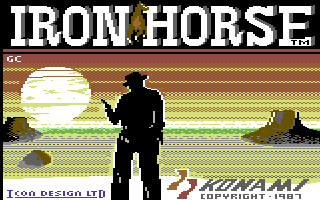 In spite of its relative obscurity, Iron Horse somehow received a Commodore 64 port, though why not one to Konami’s preferred MSX computer is unknown. It has a lesser amount of enemies in general, but they compensate by somehow being able to move fast while you trot along at a pace too leisurely. Still, it’s a technically competent port that, if not easier than the original, still gets the basics of it down pat. A ZX Spectrum version was also planned at some point, but it has not been released and no screenshots currently exist of it. 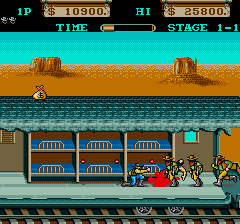 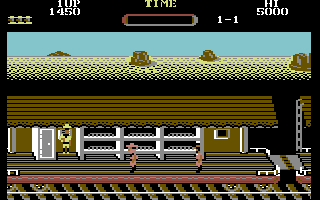