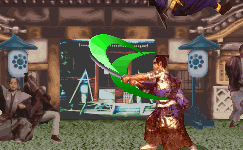 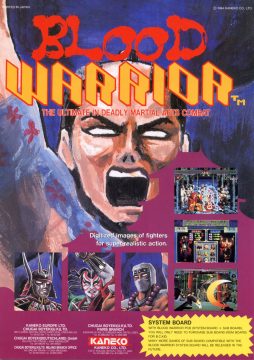 Shogun Warriors‘ enjoyed a very brief period of standing out from the crowd, but Samurai Shodown and other more polished fighting games quickly eclipsed it both with more enjoyable fighting action and with more personality, causing it to be completely forgotten by everyone, except maybe its developers. And so almost all of the same people that worked on Shogun Warriors produced a sequel, known as Blood Warrior. Regardless of the change in title for both regions, Blood Warrior is obviously a continuation of Shogun Warriors and features many of the same characters, now redesigned, properly named and depicted by actual actors. 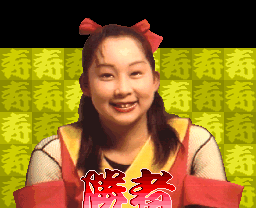 Geisya from Shadow Warriors now sports claws and has a projectile similar to Benkei’s. Her speed makes her one of the most powerful characters in the game. 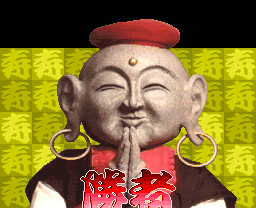 The only new character in Blood Warrior is a living statue whose limbs expand to comedic effect while fighting. Unfortunately, his special moves are very weak, and his short attack range makes him more of a joke character than an actual contender. He can be fun to use at first, but is disappointing as the game’s only newcomer. 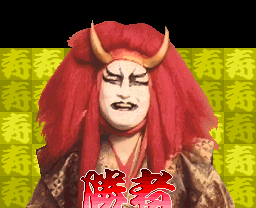 The Kabuki from Shogun Warriors. In addition to having good normal attacks his special moves have been drastically improved. 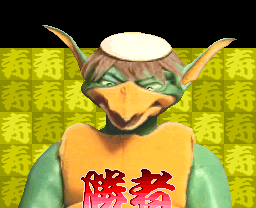 Kappa has a name is now even more powerful. The kappa outfit of the digitized actor is a must see. 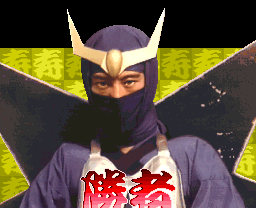 In Blood Warrior, the Ninja gains Oni’s ground projectile, but his normal attacks are drastically worse, making him one of the weaker characters. 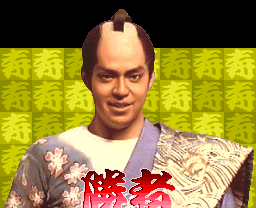 The most dramatically improved character between the two games sports much more personality and is more fun to play as in Blood Warrior. Amusingly, he demands to know if players were able to check out his “killer tattoo” when he wins a fight in Blood Warrior, but his new outfit completely obscures the tattoo that was so prominently displayed in Shogun Warriors. 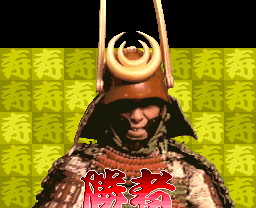 The Shogun’s modern trappings are ditched entirely for a more traditional redesign in Blood Warrior, and only his glowing eyes give him away as being more than human. 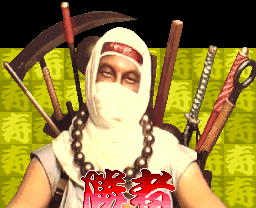 The third boss of Shogun Warriors returns as a regularly playable character in the sequel. He trades in his massive beard for a face mask and loses his projectile move, but keeps his versatile variety of basic attacks. 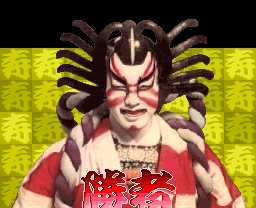 Goemon is also a regularly playable character in Blood Warrior, sporting a new, dramatic look akin to how the character would be portrayed in a Kabuki production. He also sports an array of mechanical devices, giving him a theatrical, “realistic” take on fighting game special moves. A similar approach was taken with the human versions for Cyrax and Sektor in Mortal Kombat (2010). Amusingly, the tonfa he fights with also serves as his trademark pipe. 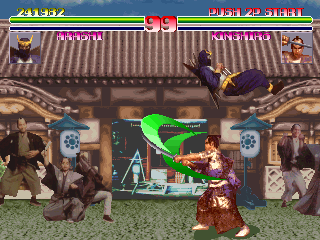 With a totally new look, much faster action and redesigns of almost every Shogun Warriors character, at a glance it looks like it has everything that makes a good sequel. Despite the improvements, unfortunately, it’s just as mediocre as its predecessor. While the digitized sprites are actually pretty good, justifying their lack of animation with faster movement speed than many other Mortal Kombat clones, Blood Warrior‘s backgrounds are all extremely bland and dull in comparison to the original.

The game also lacks personality, even with all of the new voice overs and character designs. It doesn’t quite gel together aesthetically because of the workmanlike backgrounds and, like Shogun Warriors, the total lack of context for any of the characters. In both games there are no triumphant or humorous quotes from the fighters after a battle, and while Shogun Warriors‘ ending is so short it may as well not even be there, Blood Warrior takes this to its logical conclusion and has none. After defeating the other combatants, you only get to see your character standing on a podium surrounded by some of the developers as the credits roll by. There isn’t even a boss fight at the end. For a game mostly meant to be played by two people fighting each other, these aren’t terrible omissions, but are part of why this series was quickly forgotten compared to games of its time with superior character designs and more focused art direction. 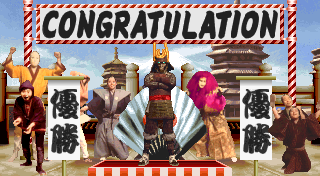 The biggest improvement with this sequel is that it is now actually possible to perform combos consistently and pressure opponents more effectively thanks to the game’s increased speed and noticeably tighter hit detection. This is a great relief after the many instances in Shogun Warriors where it’s possible to score a hit on an opponent even when an attack clearly appears to miss them completely. More forgiving special move commands are a massive step up, making it easy for even new players to perform the game’s various special attacks.

There is a new gauge below the characters’ energy bars that increases the more damage they take, which offers losing players a way to make a quick comeback. As it fills up, special moves become more powerful: projectiles increase in size or damage, successful move execution results in extra hits being dealt to the opponent, and so on. But the gauge decreases each time a move is performed, adding a bit of strategy to the game as players have to choose when it’s appropriate to prioritize a barrage of special moves over more precise and damaging attacks. 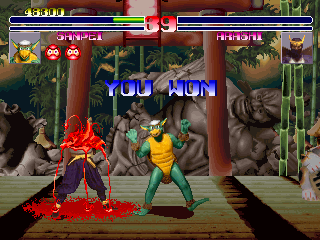 Another improvement is the new music, changing from mostly generic “traditional” songs to a generic heavy metal soundtrack. It complements the game’s more graphic violence effectively compared to Shogun Warriors‘ good but less distinct tracks. Both soundtracks were composed by Tatsuya Watanabe, but it is distinct from the music he had created for earlier Kaneko games like Heavy Unit and Air Buster.

The most amusing addition to the game, however, is a tie between the goofy costumes the actors are wearing and the ineptly executed finishing moves characters can perform to disembowel, cut in half, or explode opponents at the end of a battle. These finishing moves end up being laughable, and all you have to do is input the command for any of your character’s special moves when instructed to experience them. Mortal Kombat was always meant to be cheeseball, but the “graphic violence” in Blood Warrior is a whole new level of cartoony and idiotic. In other words, it’s fantastic. All this is matched by those campy costumes, which we get to see up close in the game’s wonderfully awkward character portraits shown before and after each fight. The game may be a mess, but it’s a funny and enjoyable one. 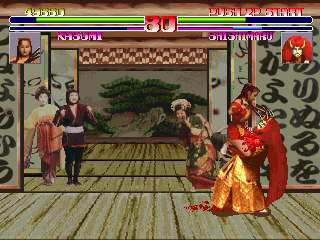 Blood Warrior is so silly that it’s still fun to play for a bit today. With a little more time and polish, it could have been a legitimately good game, as all of the changes from Shogun Warriors are focused and consistent in making it a more accessible and faster experience.