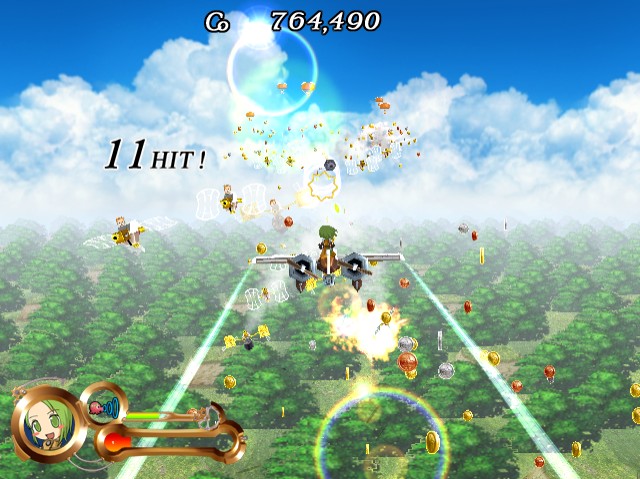 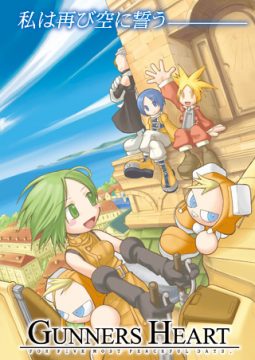 Long time Atlus fans may remember an early PS2 game called Skygunner, a cute little 3D shooter where you took to the great blue sky and wreaked up all kinds of mayhem. It featured a cast of incredibly cute characters – remarkably so, even for a Japanese game – and aircraft designs that ranked close next to Miyazaki’s masterpieces like Laputa. Despite the incredible effort that went its aesthetics, it was somewhat confusing to control, and the framerate grew abysmal in spots, relegating it to cult status. Still, it was a fun little game, and doujin software house EasyGameStation used it as the basis for the shooter Gunners Heart.

Like Skygunner, the story focuses on pilots Femme, Ciel and Copain, who are fighting the evil Ventre (a round egg looking bastard with a ridiculous mustache) and his army of malicious midget things called Poulets. In addition to returning foe Rival, EasyGameStation added a few new characters, two girls that appear to be scheming against our heroes. The story involves some kind of pendant that Ventre wants to claim from our gang, told in cutscenes between each stage. They can be sped through, although it would’ve been nice to turn them off entirely. 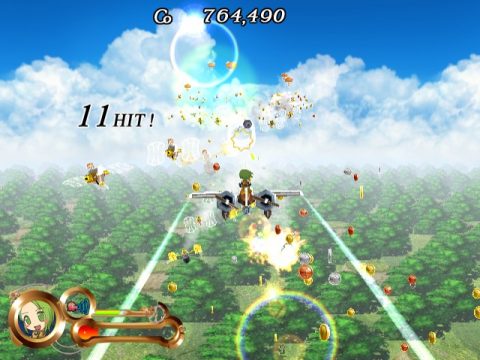 Whereas Skygunner featured open sky battles, Gunners Heart is strictly on rails. At first glance, it might look a little bit like Starfox 64 or Panzer Dragoon, although most of the stages are devoid of obstacles. Many of them consist of same scenery cycled repeatedly, although a few of them feature gigantic cities or battleships that your fighters loop around. Since it’s more focused on pure nonstop action, it actually feels a little bit closer to the original arcade After Burner, mostly due to its SHOOT-SHOOT-DODGE-SHOOT style of gameplay. Your primary weapon is a vulcan cannon, which fires for several seconds with a single press of the button, and automatically locks onto mostly targets, allowing you to track any foe that takes several hits. There are numerous secondary weapons, one of which is equipped at the beginning of each stage. These include ripple lasers, fireworks, bombs, lasers and other delicious methods of destruction. Some of these are difficult to use, requiring lock-ons similar to the missiles from After Burner. Others, like the awesome flamethrower, are much more straightforward, as it absolutely destroys anything at close range.

You can also execute barrel rolls, which give a temporary burst of speed to dodge bullets. Both the secondary weapons and dodging manuevers share the “heat” gauge, which fills anytime you execute either of these. If your engine get too hot, you become momentarily disabled, essentially turning you into a sitting duck for enemy fire. You can take a number of hits before crashing, and while you can continue where you left off when you die, you only have limited credits. There are a total of four different aircraft (although only two are available at the start), which have different stats, altering the power of your vulcan cannon or the cooling speed of the heat gauge. The fourth ship loses the ability to roll, but can switch between any of the weapons at its leisure. Two players can play at the same time, although you can have an AI drone take over the second ship if you’re playing by yourself. 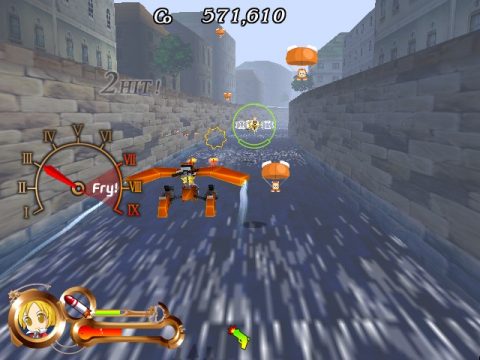 The crux of Gunners Heart – beyond dodging enemy fire, anyway – is chaining combos, which increases the money obtained. At the end of each stage, you can enter a shop and purchase numerous items, which provides an actual incentive to play for score (which is far more interesting than most arcade shooters put out nowadays.) Some of these are cute references to other shooters – the “Ripple” laser features Takosuke from Parodius, and the extra life symbol is Opa Opa from Fantasy Zone. Similar to Radiant Silvergun, any purchased weapons are permanently added to your arsenal, and your money carries over onto successive plays. Like most arcade-style games, Gunners Heart is fairly short (twenty one stages, lasting about a minute or two a piece), so this is an excellent way to add a ton of lasting value. In addition to weapons, you can also unlock additional continues, two extra airplanes, and a bonus stage. During play, you can also get temporary bonuses that affect the next stage, such as increased firepower or extra speed. With repeated plays, you can eventually stockpile enough weapons and continues to make it to the end of game.

Like most doujin games, the graphics aren’t technically that overwhelming, but the scrolling is so quick that it’s hard to dwell on its shortcomings. Most of Skygunner took place in the sky, so there wasn’t exactly much scenery to look at, but EasyGameStation has created some attractive designs – the first stage is a European city, the fifth stage seems to take place in the canals of Venice – that seem consistent with the style of the original game. I tried the game on two different systems with two different video cards, and both had issues with breaking polygons in a few areas, but it’s only a minor distracting issue. If there’s any problem, it’s that the explosions are simply way too overdone. When you blow up a ship, it bursts into sea of coins, which bounce and disappear after a second or two. It looks pretty cool, but when you destroy a whole wave of them, the screen is just filled with mayhem, and it’s really hard to pick out any threatening projectiles, especially in the few stages that restrict your movement to a small portion of the screen. The controls are little bit fidgety since there’s no true analog movement, and trying to target specifically enemies can be a bit difficult, especially since the targetting cursor auto-centers. And while Skygunner used an impressively dramatic synth orchestral soundtrack, Gunners Heart opts for more light-hearted peppy fare. It’s pretty catchy, but there are only three real songs in the game, so they grow old quickly.

Gunners Heart is a rarity. Since it’s focused so heavily on fast paced action and scoring, it’s one of the few titles that actually feels like a 2D arcade shooter implemented in 3D, which is extremely impressive coming from an independent developer. Its incentive-based gameplay also gives it quite a bit more lasting value than even home ports of modern arcade shooters. This is definitely one of the most well rounded, well produced doujin games out there, and most certainly worth checking out.

French company DHM Interactive bought the rights for international distribution and translated it into several languages. It is available for purchase at Gamersgate.

Links:
EasyGameStation – Gunners Heart Official homepage, includes a demo, as well as the most recent patch.