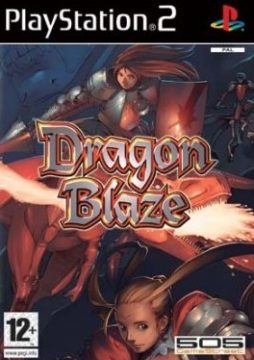 Psikyo is largely known for creating an expansive line of shooters, with their most famous being Strikers 1945, Sengoku Ace, and Gunbird. In the twilight years of the company, they produced Dragon Blaze, one that has comparatively gone overlooked. Despite being released in 2000, it initially looks, sounds and feels like every other shooter they’ve ever done, but it’s actually quite outstanding, a polished work that combines a surprisingly simplistic scoring system and blisteringly hard difficulty. 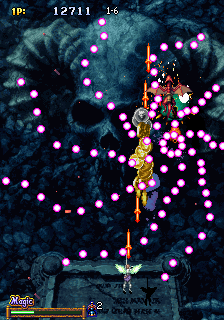 The story focuses on four knights attempting to kill the Demon King, all for different personal reasons. Each knight rides a powerful dragon and is guided by the sun and moon gods, hunting down artifacts to open up a portal to hell to go fight their nemesis. The roster is a little thin compared to other Psikyo games, with only four characters. The characters were illustrated by Kouji Ogata, primarily known for Boogiepop Phantom. 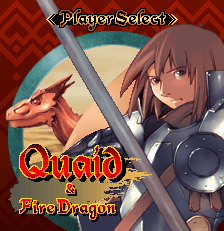 Quaid lost his girlfriend to the Demon King and is out for justice. He takes his mission very seriously and is always growling to himself about how he wants to take revenge. Quaid rides a fire dragon, which just shoots straight forward. 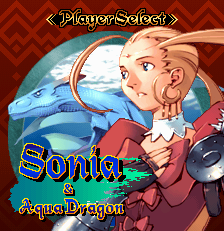 Sonia is a princess wizard looking to find her mother, who has mysteriously disappeared. She uses a cool automatic crossbow and rides an aqua dragon with two smaller dragons serving as options. 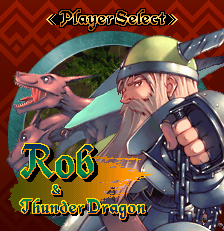 Rob is a dwarf berserker who is not very smart and easily confused. He is looking for his brothers and pretty much goes on this adventure by accident. He kind of hates the sun and moon gods and ignores them whenever they start talking. Rob has easily the coolest dragon of the playable characters, a two-headed thunder dragon. It does not move fast, but the thunder dragon has an impressive wide shot to make up for it. 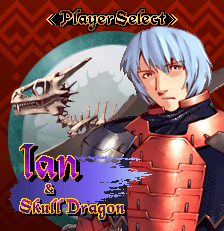 A depressed knight looking for his lost master. He rides a skull dragon and is by far, the most difficult character to use. Every last one of his attacks, from the bomb to any of his magic shots shoot in a straight line. The only thing even close to an attack that shoots in any other direction are homing knives that do not actually home in very well. Luckily, Ian makes up for this flaw with the best speed and respectable power. He also has the funniest ending. 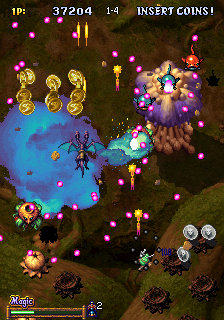 The most interesting feature in Dragon Blaze is the ability to dismount your steed, known as a “dragon shoot”. By pressing the dismount button, the dragon charges forward, ramming any enemies in its way and maintaining his position on the screen, while you continue to control the rider, who has the ability to float. This allows you to shoot from two places on the screen at once, with the rider possessing a weaker weapon than his dragon. Pressing the dismount button again will call the dragon back. It’s similar to concept to the pod from R-Type, but while the dragon is invincible while dismounted, it can’t absorb bullets. Having your dragon blast away at a stationary enemy while dodging the extremely fast bullets is essential to make any sort of progress. There’s also a magic meter, obviously used for magic attacks, which charges as you destroy enemies. These attacks are initiated by holding down the fire button, and change depending on whether your knight is mounted or dismounted. There are also bombs, which are separate from your magic attacks. Like Strikers 1999, there’s also a “technical bonus” obtained when you wait for a boss to reveal their weakpoint, then focusing on it to destroy them quickly.

Mastering these tricks is essential, because Dragon Blaze gets quite difficult. In fact, much more difficult than Psikyo’s other games. While not technically a bullet hell shooter, the projectiles flood the screen more than the typical Psikyo game, with a combination of Cave-style bullet curtains and Raiden-style bullet speed, which makes many of the bosses quite terrifying. Less than half way through the game, the screen is almost always covered in fast moving, glowing pink death. 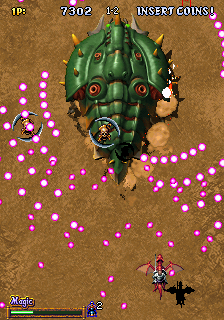 The scoring system is extremely simple and easy to learn. Killing enemies makes them drop silver coins, which add bonus points to the score. Dismounting and ramming them with the dragon makes them drop gold coins instead, which are worth even more points. Destroying certain enemies this way will drop a coin head, which will ricochet around, dropping coins everywhere. It’s a neat risk/reward mechanic, because the “dragon shoot” only has limited range, so it requires you to get fairly close to any enemy, while avoiding its bullets, in order to be used effectively.

The graphics are a little simple, looking very dated compared to other games released in 2000, 2D or otherwise. Still, it’s not a bad looking game.The character and enemy sprites are small, but very detailed and well animated. The backgrounds are inconsistent, with the first stage taking place against a dull green fog, but later areas are nice looking, particularly the beautiful forest full of mushrooms. Hell is one of the better looking levels, with cool looking details like the huge skeletons in the background. The bosses are very animated and have many moving parts, though it can be hard to actually see them behind the curtains of bright pink bullets that they spray off. 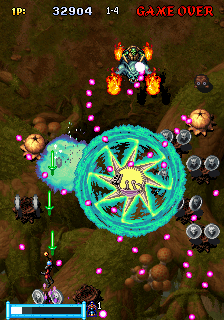 Most of Psikyo’s games had a tendency to blend together, but Dragon Blaze is a bit different – its focusing on constantly mounting and dismounting not only changes up the pace substantially but makes for a more rewarding scoring system, making it one of the better titles in their library. It was never released officially released in North America, but an English ROM set does exist. It was ported to the PlayStation 2 and released as part of the Psikyo Shooting Collection Volume 3, which also includes Sol Divide. Dragon Blaze was carved out of this collection and published as a standalone release in Europe by budget house 505 Game Street. Both releases are extremely pricey on the aftermarket.