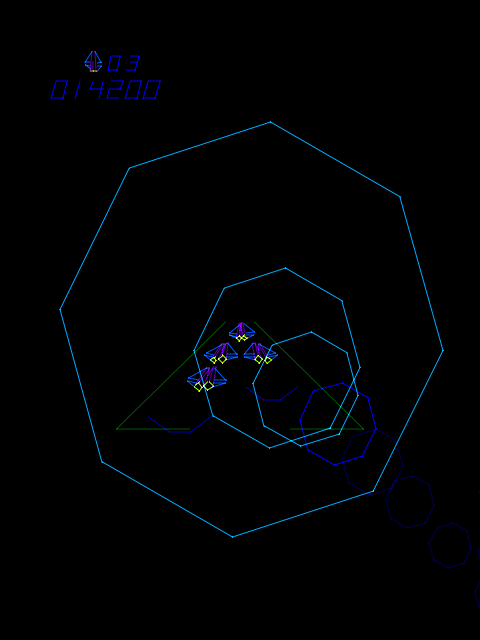 Sega has made a total of five known vector graphics titles, most of which were derivatives of the basic Spacewar! formula of shooting everything in sight with a spaceship’s cannons. Space Fury, Eliminator, Zektor, and Star Trek were all very fun games in their own right, but the fifth vector game is especially interesting, as it combines vertical overhead shooting action with third-person shooting somewhat evocative of Tempest, adding on top of it an interesting mechanic which has scarcely been seen in any future shmup. Tac/Scan (with “Tac” being short for “tactical”) is all about shooting without getting shot, but with a twist different from most other space shooters. Most such games have you pilot a solitary craft, but Tac/Scan puts you in simultaneous command of seven space fighters, all of which move and shoot in unison. This puts a little more realism into the genre than the “one ship against an entire fleet” premise that directs 99% of the genre, even if multiple small ships versus the enemy isn’t too much more believable. But this genre has never been about plausibility, and Tac/Scan focuses on what makes it entertaining: Fast pace, constant action, and a special factor which makes it stand out; in Tac/Scan‘s case, it includes a tactical element of managing your ships and reserves. 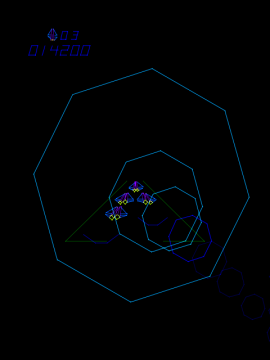 Tac/Scan features three types of stages that cycle around in a set order: Vertical, 3D, and Tunnel. The vertical levels place your ships out in a predetermined formation, and you’ll have to accommodate your offense and defense based on how your ships are laid out. They can be bunched close together, spread far apart, gathered in a straight line, and always symmetrically divided. Your squad of seven ships only ever fire one weapon (a straight-flying laser shot), but all enemies die in a single hit, so no further weaponry is required aside from strength in numbers. Your adversary is the Ahmin Armada and their infinite amount of ships. There are two types of enemy targets, with the Annihilators being the more common craft. These spiky ships blast out fireballs in your general direction, and you’ll have to do your best to weave around them. Worse are the Stingers, round saucers which fly in occasionally and blast a concentrated laser beam into your formation. You can either meet these enemies head-on or fly around them, though your ships do not remain pointed north as you move them around. Tilting ships left or right adjusts their fire arc appropriately, requiring a bit of skill to dodge and aim at the same time but allowing you to stay safe in certain situations.

A bit on how ship management works: The red-lined ship in the center is the leading ship, but you can continue to fight even after it gets wrecked, and the same goes for any of your remaining ships. If you lose any ships during the vertical segments, replacements will fly in two at a time every few seconds, and you have to make sure these ships land in empty spaces where a ship would normally go. You can also fly into these ships with your central ship (if it’s still around) and they enter your ship reserves. Your reserves are essentially your extra lives, and you start with eight in tow. If any ships are destroyed, press the second button to refill any vacant spaces. You can gain a new reserve after every 20,000 points in addition to the replacements which fly in at random. There may be times when having less ships in your formation is advantageous, as it is easier to dodge enemy fire when you have less units to mind. However, if you are down to one ship and it is destroyed, your game ends regardless of how many reserves you have left in stock. 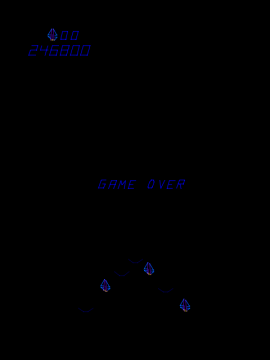 The 3D segments set the camera behind your ships and bunch them up in a reverse “V” formation. These parts are generally faster and more difficult than the vertical segments, as it can be difficult to anticipate the oncoming rush of enemy ships and their shots. The Annihilators come in two flavors here with different-colored front lines: Blue ones that stay still, and orange ones which hover left and right. The Stingers are basically unchanged, though it’s even tougher to dodge their lasers here. On top of higher enemy difficulty, you are only given bonus ships at the ends of these parts instead of throughout the level. If you survive a 3D stage, you transition right into a tunnel level meant to test your piloting skills. The tunnel levels take you through an interspatial wormhole devoid of enemies. These segments are short, but you can’t slack off as poor flying can shred up your ships. You must stay within the confines of the tunnel as indicated by a large triangular cursor, and veering too far off to either side causes a red bar to pop up. Going too far past this bar crashes your ships into the tunnel, but it’s usually not too difficult to mind your space in these segments.

The tunnel stage leads right back into the vertical stage, and these levels keep playing out in this order in incrementally faster and more vicious enemy waves until the game concludes after you inevitably run out of ships. There’s not a lot else to it once you know how the game plays, just mind your ships if you’re shooting for a high score. The shooting action’s intense enough to make Tac/Scan a decent game, but the multiple ship management is what makes it stand out over other shooters of the time. No other shmup today really plays like Tac/Scan, and it comes highly recommended to anyone looking for something different in the genre. Even back in the early eighties, Sega was always attempting to innovate games to be something more than they already were, and Tac/Scan showed that space shooters didn’t necessarily have to borrow from Space Invaders to be memorable. 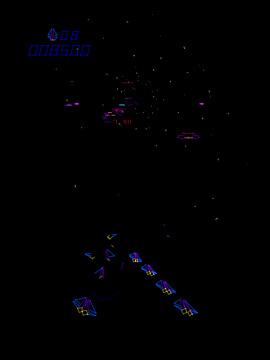 Tac/Scan also received an Atari 2600 port which kept half of the basic gameplay intact. Unfortunately, it had to cut out the other half in the form of the 3D and tunnel segments, which the 2600’s hardware was not able to adequately handle. Still, the basic gameplay of the vertical segments remain intact here, though you only have a total command of five ships instead of seven. The Stinger ships are absent, making the action seem a bit flat when you’re only just avoiding the same type of enemy in the exact same fashion. The 2600 port tried to do what it could, but the original arcade version is the only way to go for the full Tac/Scan experience.

Tac/Scan was featured as a bonus unlockable on the Sega Genesis Collection for the PlayStation 2. It’s the only official to way any version of the arcade game. 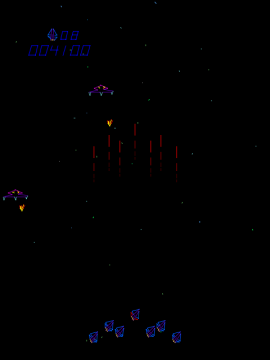 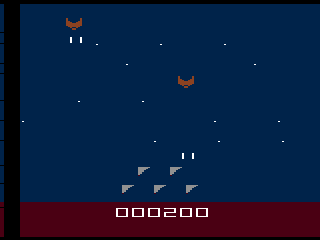