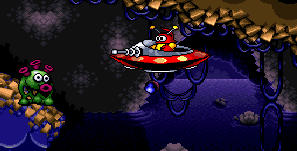 While we may have idyllic recollections of what the 16-bit era of gaming was like, it’s hard to downplay the size of the graveyard dedicated to the “mascot platformers.” In the wake of Sonic the Hedgehog‘s success, it felt like every company attempted to take a bite out of Mario’s popularity. Some of these games were good. Most were Bubsy the Bobcat. 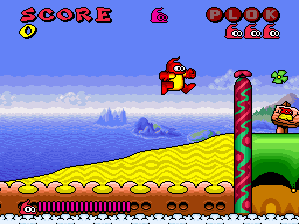 John and Ste Pickford’s Plok for the SNES does enough right to stand out from the pack. Originally derived from an arcade prototype Flea Pit – interestingly built on Rare based hardware – the final project was the first self funded project by the now defunct developer Software Creation. Interestingly, the Pickfords held and still hold the trademark and IP instead of the now defunct Acclaim, which had acquired the studio in the mid 90’s. According to the Pickfords, the game was at some point supposed to be published and co-developed by Nintendo, with a vote confidence from Shigeru Miyamoto, but was eventually published by Tradewest (it may have been to avoid s potential conflict with Yoshi’s Island).

While there are noticeable technical flaws, several aspects of the game’s design make it stand above more rote or even superior mascot platformers. Most obviously (at least based on the screenshots) is the seemingly dadaist approach to setting, dialog, a bright colour pallet, oddball characters, and an equally odd plot. Second is Tim Follin’s memorable soundtrack. 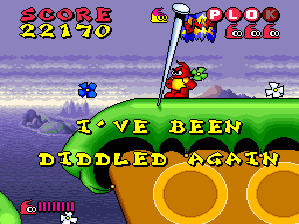 Like most mascot platformers, Plok’s plot is nearly irrelevant and whoever wrote the game must have been aware of this: Plok (the title character) is on a quest to reclaim his father’s flags – which had been stolen by the Bobbin’s Brothers – only to find his home has been overrun by fleas. Eventually, he comes across the fleas’ home turf where he puts an end to this nonsense. Again, the plot is a loose justification for the action and is delightfully irreverent in a very dry, British way. 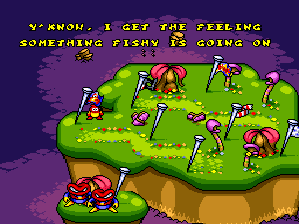 The plot also serves as a way to break up the structure of the game. The first few levels are straightforward left-to-right platforming. The second batch of levels are much larger, multi-tiered levels in which the player has to explore and hunt down fleas. In theory this sounds good, but in reality most of these levels are just as linear but with an added task – and missing a flea can end in hopeless frustration (and desperately trying to find the fleas’ “BOING” audio cue). The last stretch of the game returns to the left-right structure, but now Plok receives a powerup to complete the level. Some of these powerups make sense such as the jetpack, helicopter, or car. Some involve spring-shoes and being armed with a spraycan. 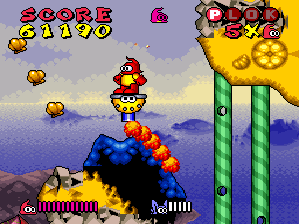 Plok’s most distinct gameplay feature is his means of self defense: launching his limbs at enemies. Instead of head bouncing, his primary means of attack fires off one of his four limbs which then boomerang back to him. Should he not have enough limbs left to throw, not only will he not attack (and wait till launched limbs fly back) and hop around helplessly till his limbs return. This is probably the most unique mechanic of the game (Plok having a finite number of limbs) but is used rather sparingly, as most of the game is the standard action platforming fare. The levels that do take advantage of Plok’s limited… limbs usually involve having to ration them as they are locked to open paths for exploration. This light puzzler element adds a freshness that is largely abandoned during the final stretch of the game which, again, focuses on level specific power-ups. Other gameplay quirks include several warps. These are both challenging to find and complete as they involve a potentially fatal race-to-the-finish minigame. 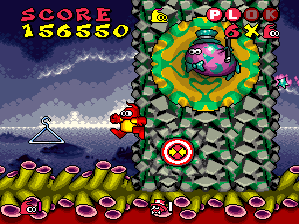 Plok’s world, the island Akryllic, is also a defining characteristic. It’s bright, colorful, and filled with oblong and curved angles. The curvature of Akryllic does serve as a major point of frustration, creating moments of disappointingly imprecise platforming moments (notably the level Creepy Crag). These are relatively few, but numerous enough to amplify Plok’s already considerable difficulty. Then the lack of a save or password feature, finite continues, and considerable length of the game make it harder than was probably necessary and is likely the most off-putting element of the game. Particularly the later stretches of the game, completing Plok is a challenging game. At least Super Ghouls and Ghosts has a generous continue system whereas Plok’s is finite. 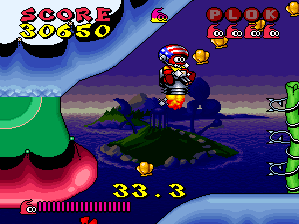 As alluded to, another well-aged aspect is Tim Follin (credited as the main composer) and brother Geoff’s soundtrack, though apparently Geoff did most of the work on it. The Follins’ soundtrack is far beefier and crisper than most SNES soundtracks. This is because of the distinct guitar sound. The sample is recorded as chords (more than a single simultaneous note) so they could cheat the 8 track limit to the SNES sound chip. It’s hard to substantiate the claim that it is a compressed live sample but this is entirely plausible given its uniqueness to the game and that Follin does use live samples with relative frequency. The Follin brothers take advantage and use that sample in most of the tracks to the point that Shigeru Miyamoto expressed surprise at the sound that the SNES chip was able to produce. 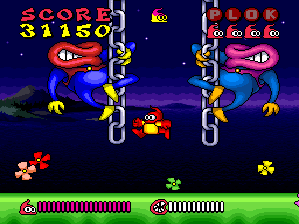 In addition to the fidelity, the length of the level loops are atypical. Most loops for SNES levels are between one minute and two, perhaps shorter for earlier games. For comparison, Final Fantasy IV‘s overworld theme is about 1:40, Super Mario World’s athletic theme is 0:40. The shortest level loop in Plok (“Legacy Island・) is over two minutes long, and most loops are more than three minutes in length. 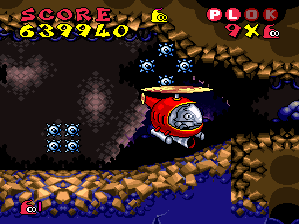 The musicality of soundtrack is then equally striking. Melodies are often heavily syncopated and metrically complicated, mixing duple and triplet inflection. Tempo and meter changes are used in most of the tracks, there are several uses of complex meters (specifically 3/4 time in the track “Beach”) in video games. To the best of my knowledge, this soundtrack has one of the few metric modulations in video game soundtracks, a rare musical device where the length of a note in one tempo becomes the beats per minute in a new tempo. This all displays Tim Follin’s, self professed, obsession and prog rock influence.

Starting in 2013, the Pickford brothers revived the character in comic book form. To date there have been #117 issues with four compilations.