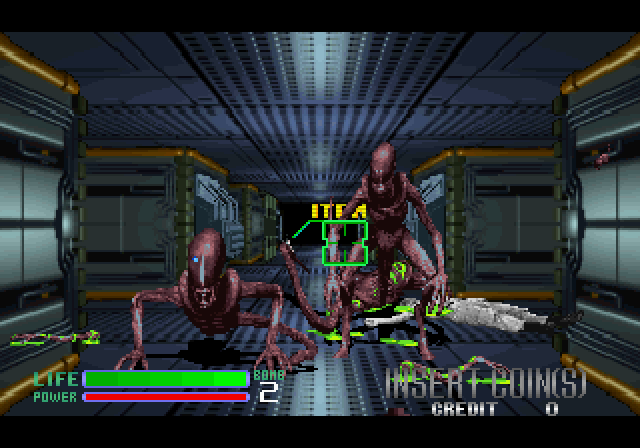 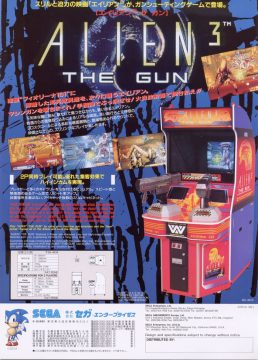 When Alien 3 came out in theaters, many hated it for its lack of distinct characters and how, compared to Alien‘s cynical crew and Aliens‘ cocky marines, Alien 3 only offered a bunch of unarmed bald guys running around in the dark and a some half-baked spiritualism. A restored and more complete version of the film, first released as the “Assembly Cut” in 2003, fixes just about every major issue with the movie, but Sega’s own alterations prove a bit interesting as well. Not because it’s an action packed game with hordes of aliens, but because it actually has some visual details and quirks to its story that make it closer to this Assembly Cut version of the movie that the general public wouldn’t get to see until ten years later! 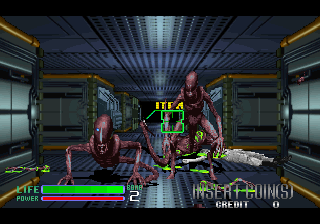 Unlike more hackneyed licensed games, Sega did a good job fleshing out Fiorina “Fury” 161 instead of throwing in enemies with no sense of continuity. The new plot doesn’t directly involve Ripley, Hicks, or Newt at all. Instead a new squad of marines is sent to locate the Sulaco from Aliens and figure out why it hasn’t returned yet. They quickly find out that the ship is infested with aliens, and soon only two unnamed marines are left to be controlled by the players. After defeating a “super face hugger,” (something that actually is from the movie, but unseen by audiences until that 2003 Assembly Cut!), they narrowly escape and crash land on Fury, only to learn that it’s already completely overrun with a massive horde of aliens. However, there are also some old combat drones and security robots laying around, most of which are confronted in the game’s second level. Here players have to make their way from the crashed escape pod to the prison itself, and it’s great to have some sustained time spent on the little seen surface of this dangerous world.

The use of color is great here, with scenery that looks washed out because of rainy, windy weather rather than a lack of vigilance on the part of the game’s background artists. It’s towards the end of this level, after traversing a minefield, that players encounter a “graveyard” full of wrecked androids, some of which come to life. After this our unnamed marines close in on and enter the refinery itself during sunset, with some dour but determined music accompanying them. It’s a really strong way to create a non-stop action game (obviously a huge departure from the film itself) that also reasonably evokes an atmosphere somewhere between that of Aliens and Alien 3 itself. That Sega is able to keep Alien 3‘s hostile aesthetic intact without any of its other accompanying themes is very impressive. These two outdoor levels stand out as the high points of the game, and also have more interesting progression than the typical lightgun shooter of the time, with our heroes having to take a meandering path to their destination, exploring a little bit, having to turn and run from massive stampedes of aliens at points, it’s great. We also get a cool continuation of this commitment in the next level (wisely titled level 2.2 instead of level 3, as it’s the final outdoor part of the game). Here players are forced to retreat from a huge army of aliens, as the sun is setting, having to switch to infrared vision as they get further within the grounds of the foundry that makes up the rest of the game. 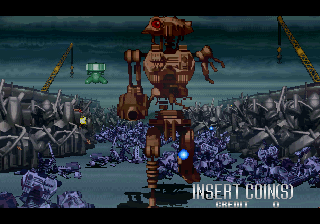 On top of this, we see every stage of an alien’s life span represented throughout the game, even the queen that bursts out of Ripley’s chest at the end of the film’s theatrical version makes an appearance. This is already a huge step up from any previous Alien 3 game, where the aliens tended to be the least interesting part. Instead the presentation here is nicely detailed in every way. The aliens even get dismembered as they take more damage, and one can optionally choose to shoot and destroy their writing corpses even after they’re defeated. There are even ones that burst both out of dead dogs and out of oxen strung up in the cafeteria/abattoir level. And again, the imagery is clearly based on what is now known as the Assembly Cut of the film, did Sega have access to a work print of the film a decade before it was available to the rest of the world, or did they a nice tour of the set? As a final nice touch, a brief “profile” of each boss appears before each confrontation with them (Something else Sega would use again in The House of the Dead), these actually do specify whether the alien in question burst forth from a human or from a dog.

Even Alien 3: The Gun‘s soundtrack is on point. Outside of the energetic boss fight songs, most of it is a slow burn using instruments and beats that evoke a slow march to death. This is a really impressive choice given what a nihilistic film Alien 3 is for most of its running time, and it’s great to see that aspect of the film still fit into and complement the game despite the non-stop action. A few of the tracks are very somber for this type of game, making a great match for the dreary graphics. As a final aurally-accurate nod to Alien 3, there’s even two instances of digitized profanity, with the player exclaiming “FUCK!” as the plan to lure the alien into a trap gets off to an unexpected start, and an “Oh SHIT!” when the alien pops out for one last attack at end of the game. Not a huge deal, but a rarity for an early 90s arcade game. 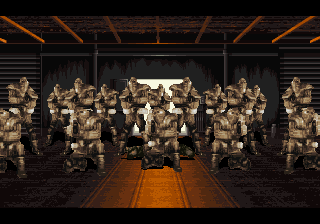 The game’s simple story also makes it very accurate to its roots. In true Alien film franchise form, the true enemy of The Gun turns out to not be aliens, but rather good old corporate greed. Throughout the game players will encounter a few automated defenses that seem suspiciously new. A few types of drones equipped with rockets, a massive tank, some synthetic soldiers, and those automated turrets we get treated to in the extended version of Aliens. Those turrets only show up in one spot but again stand out – the scene they’re from was only available at the time on the 1991 laserdisc of Aliens, so again Sega did a great job keeping up to date with different releases of the film to create a consistent story and set of levels for our pair of marines to blast through.

All of this comes to a head when players finally defeat the alien, like in the film, the human (OR IS HE…?) that the Bishop android is based on shows up with his corporate enforcers, asking where the aliens are. However, when our marines inform him they’ve all been destroyed he loses it and attacks the pair with a flame thrower! Once he’s killed – and the game does have him fall over dead like a regular human, no dramatically splattering android fluid or anything like that – a bunch of those enforcers rush in to kill the marines! The game finishes on a vague note, with a text blurb saying no one knows if the marines are dead or alive. Since the last we see of them is a fade to white as they charge into battle against Weyland-Yutani’s thugs, however, it’s safe to say they both died. Either way, Alien 3: The Gun clearly had a lot of effort put into it. It makes for a very interesting alternate version of the film’s story, lacking the religious parallels of the Assembly Cut while mixing the film’s locations with a more action packed situation. It never totally loses Alien 3‘s aesthetic, however, ensuring it will be a fun time for Alien fans of all stripes.