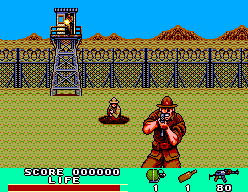 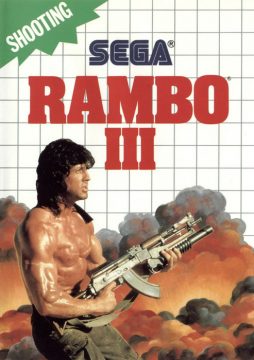 Unlike the previous Rambo game for the Sega Master System, this is a shooting gallery-style game that requires the Light Phaser. You have a limited supply of machine gun bullets, so you can just hold down the trigger to mow down bad guys. Once you run out, you need to resort to single fire shots. You also have a single grenade to kill everything on the screen (including civilians) and a power drink (which looks like a beer bottle) to replenish your health – both are activated by shooting at the icons at the bottom of the screen. It’s a really frustratingly designed game, because multiple enemies will pop up at once, all draining your life meter at the same time. It’s impossible to completely escape damage, it’s just a matter of reducing it as much as possible. The digitized graphics used in the intro and intermissions cinemas are the only thing that seem to tie this into Rambo – otherwise, it just looks like an Operation Wolf clone.