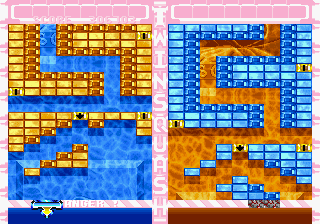 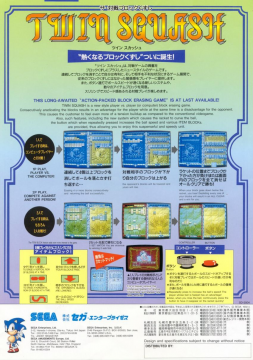 Breakout is one of the simplest games in the universe. Launch a ball, hit a block, bounce the ball back with a paddle, repeat ad infinitum. Conceived as something of a follow-up to the legendary Pong, its popularity influenced a myriad of games that are colloquially known as “Breakout clones” which also involve using balls to destroy bricks. Taito’s Arkanoid grew to be among the most famous with its unique aesthetics and power-ups jazzing up the gameplay. Not too long after, Sega made Gigas which was a complete rip of Arkanoid but still managed to be a fun if derivative game. The Sega Master System featured Woody Pop, another Breakout-type game with an interesting appearance and the ability to choose multiple levels, making it one of the better system exclusives. Then in 1991, Sega ironically brought things back to full circle with the release of Twin Squash. It could be argued that Breakout was to single-player squash as Pong was to Tennis, with the enemy being less your opponent and more your own skill. Twin Squash, perhaps named after the racquet sport, is essentially versus-Breakout, which makes it closer to Pong than Breakout had ever been before.

As with most versus puzzle games a la Puyo Puyo, Twin Squash is divided into two playfields between yours and your enemy. Matches are best 2-out-of-3 and your goal is to keep the ball active for as long as possible in the hopes that your enemy blows it before you do. The blocks above you slowly drop after every few seconds, and whoever first lets a block drop down to the level of their paddle is the loser of that round. If you drop the ball, your blocks automatically drop a couple of levels but you do not outright lose as in most other Breakout-types. In order to sabotage your enemy, you should attempt to hit as many balls as you can in a single bounce, building up the combo meter at the top of the screen. Returning the ball after hitting blocks thirty-or-so times in one go will drops your enemy’s blocks faster than a heavy lourde. However, if you whiff on catching the ball after a massive combo, you get no credit for it and all that effort to dog your foe rolls down the drain. You can also win with an “All-Clear,” where you wipe every single block off of your playfield before new ones have a chance to drop. A somewhat creepy voice keeps chanting “ALL-CLEAR” if you only have about five blocks left on your side, and victory (and quiet) is yours if you manage to tag that last block under pressure. 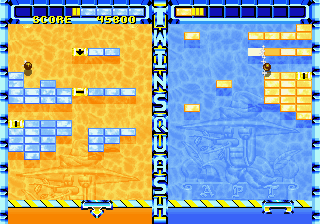 There aren’t any Arkanoid-like power capsules, but there are some special glowing blocks which perform special functions if you manage to hit them. The horizontal line blocks wipe out the rest of the blocks on the same row, and the vertical line blocks vaporize all blocks above and below it. You don’t gain any combo meter for blocks that are not directly hit by your ball, but it’s nice to clear them out to leave space for potential combos. The down arrow block automatically pushes your opponent’s blocks down a few levels, while the potentially game-breaking up arrow scrolls your blocks up off the top of the screen. It is difficult to say what determines how far the up arrow blocks scroll your side of the terrain, but it can potentially lead to an instant All-Clear and anger your enemy hence. Finally, the S-block (which only seems to appear in two-player matches) speeds your ball up to ridiculous proportions, which may be a boon or a pain depending on how fast you’re able to catch the ball. If the ball moves faster, you can drop the enemy’s playfield at a quicker rate, but it’s far easier for you to let the ball slip and drop your own area.

You can either play against the computer or another player, and if you opt for the former, you engage in a ten-character gauntlet against robotic fantasy-themed enemies. Your first adversary is an immensely creepy clown, though he is at least polite to you if you lose. Even as the easiest opponent, victory can come down to a matter of how lucky you or the AI gets, so the game gets tough on the outset. Conversely, you may also be able to win matches in a matter of seconds depending on how quickly you can achieve an All-Clear or ruin the enemy. Later baddies include a wooden man, a witch, a Frankenstein’s monster and so forth, though they do all have some interesting designs and their faces are plastered on their appropriate stages. The earlier opponents actually give you some good tips (such as pressing the launch button repeatedly to speed up the ball), and some are fairly polite whether you win or lose, though later enemies get a bit snarkier.

The AI is fairly consistent throughout the gauntlet, meaning they’re as apt to easily lose as they are able to crush you within a few seconds. Each enemy presents completely different block patterns for you to break, and they even further change over the second and third rounds, technically giving the game thirty different stages. There are even more over at versus mode, which is slightly fairer than tackling the CPU. The best way to play Twin Squash is with another human, as it the case with any games particularly oriented around head-to-head versus modes. Still, even in single-player, Twin Squash offers a lot of overall good. It’s still Breakout, but it’s Breakout with a versus twist and a fast speed, as well as some neat graphics which are somewhat reminiscent of Sega’s Columns. Whatever music exists is also good, with the main stage theme being as upbeat and Sega-ish as you can get. While Twin Squash isn’t exactly Puyo Puyo or Twinkle Star Sprites, it’s an overlooked entry in the increasingly popular competitive puzzle genre of the nineties that should be looked at by Breakout and Sega fans alike.