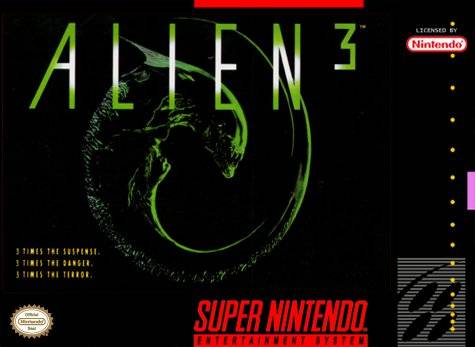 After Probe’s first take on Alien 3, things started to look up in 1993. Fans would be treated to three good Alien 3 games from three completely unrelated developers and publishers. All three fell into obscurity shortly after their release due to the terrible reputation of games licensed from film properties emboldened by the mixed reception of the Alien 3 film itself. However, over time gamers have come to appreciate the effort put into Alien 3 on the SNES, in the arcades, and on the Game Boy.

The SNES version of Alien 3 is again brought to us by a team up of LJN and Probe, but it’s a completely different beast from the title gamers were subjected to on previous systems. In an unexpected twist, both LJN and Probe redeem themselves! The look and sound of the game is a huge improvement over any previous version and much more in line with the film, and the game’s level design would also end up being a template for later licensed games by Probe and other developers like Judge Dredd, Stargate and Demolition Man. Probe’s SNES Alien 3, however, remains the most ambitious of them all. It’s notable that this game was released a year before Super Metroid, even though it has what we would refer to as light Metroidvania elements today. 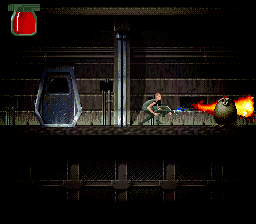 Visually, the game is a perfect mix of the NES and C64 Alien 3’s darkness and the Amiga and Genesis version’s more detailed scenery. We see a much more accurate depiction of the film’s foundry-turned-prison, with Fincher’s yellow and green palette duplicated with more care. Ripley’s sprite is also roughly based on the character’s look in the Amiga game, but the animation is significantly better. There are also some nice extra graphical details to given an impression of an area being extremely dark without actually losing too much visual detail. Besides being more smoothly animated, Ripley can now aim her weapons in almost any direction at any time again unlike the odd restrictions found on the NES and Sega Master System, and Probe finally made the height of her jumps and running speed better complement the level design. The SNES’ larger button selection is also welcome as each weapon is now assigned to its own button rather than one having to cycle through them constantly.

The aliens themselves are still not animated particularly well, though they now attack, scream, and explode very dramatically. It can be a little easier to avoid them too, as levels now have more easily accessible platforms and Ripley can also hang from ledges and climb hand over hand across precipices or over aliens. The sound is also much improved, with (albeit low quality) samples for some weapons and most of the aliens coming directly from the films. Hudson’s infamous exclamation of “Game over man, game over!” from Aliens even makes an appearance when players run out of lives. 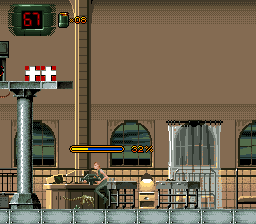 On top of these improvements, there’s yet another all new soundtrack. This time the game’s music and sound effects were handled by Steve Collett. Some of Collett’s other work includes music for the SNES version of Chuck Rock and an outstanding rearrangement of Martin Iveson’s Amiga/Atari ST soundtrack for the SNES version of Wolf Child. The music is very effectively evocative of all three Alien films. Bits of Breakaway from the Alien score and Futile Escape from Aliens are both evoked in the music along with more immediately appropriate pieces from the Alien 3 soundtrack itself. A bit of Furniss’ own beats can be heard as well. In general the game’s music is very aggressive and urgent compared to any other Alien 3 game, adding to the alternately deliberate and frantic atmosphere the game’s levels are now built around. It’s also impressive that even the completely original tracks sound perfectly in place here.

On top of all this, what really makes SNES Alien 3 worth playing is the game’s completely new structure. Instead of bumbling around aimlessly searching for prisoners while the clock is ticking, players are free to explore much of the complex immediately upon starting the game. Instead of feeling rushed by a timer, players feel rushed by the dangerous atmosphere, music, and game objectives. The game begins in a central hub from which players can access a computer terminal. Here one can view maps of the station and see various things currently wrong with it. From this list one selects to take on various missions that involve rescuing prisoners, making repairs, eliminating nests of aliens, and cutting off or accessing areas of the facility. Many of these changes are permanent, creating situations where one might have to make the call between sealing off an area, meaning less aliens coming from it overall, or leaving it open so that the player can return to it to access stores of ammunition and supplies. 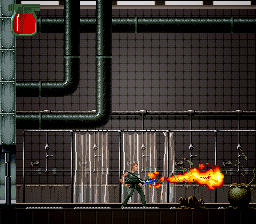 It’s also the only Alien 3 game to actually end with Ripley falling into that vat of molten lead at the end like in the movie. Though the game quickly cuts to the credits right after, not bothering with the more reflective end sequence seen in the film. The credits themselves are pretty fun, as we learn that it was actually designed and programmed by Nick “THE MASTER” Jones of SpearSoft Entertainment. Going by the credits, SpearSoft consists of Nick Jones himself, he even hid his contact information in the game. Thanks to The Cutting Room Floor (https://tcrf.net) we can see what the first piece of data in the game’s ROM tells us:

While Spearsoft’s only credit is in this SNES Alien 3 game, Nick Jones has built an impressive resume of games over the years for which he has contributed both programming skills and sound design (impressive for someone whose first game was the more questionable Stormlord, a game similar to NES Alien 3 in its frustrating use of a timer). However, if one goes to http://www.spearsoft.net/ one will also find a list of apps developed under the name SpearSoft along with a listing for Harpoon 3. Harpoon is a naval warfare simulation series based on a 80s tabletop game of the same name created by Larry Bond. We also learn from Home of the Underdogs that Harpoon’s original developer, Three-Sixty, went under in 1994, right after SpearSoft first appears. Unfortunately the SpearSoft site itself disappeared around March 2016 (though a fragmented iteration of it can still be navigated via archive.org), but Harpoon 3 can still be purchased here and SpearSoft’s other apps and games can be found on FileDIR (https://filedir.com/developer/spearsoft/), and everything one needs to know about the history of Harpoon can be found at http://www.h3milsim.net/. 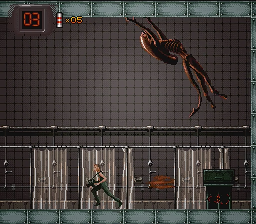 Either way, Alien 3 on the SNES is a huge improvement over its brethren. The effort to do something more original with the license compared to Probe’s initial effort is welcome. Unlike those previous takes on Alien 3, by focusing more on creating action built around the film’s atmosphere and sound it’s much more accessible while still remaining tense throughout.