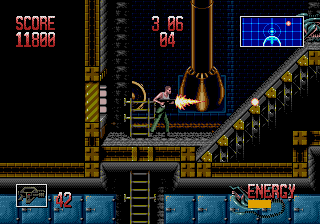 During heavily promoted build up to Alien 3’s premiere, a video game was produced as part of its marketing campaign for several systems courtesy of Probe. The game initially seems to follow the plot of the film, with Ripley and an alien surviving a crash landing into an all but abandoned foundry-turned-prison.  Rather than a game chronicling how the movie plays out from there, however, Probe has produced something with more action, but not quite as interesting. Instead players get to control a heavily armed Ripley as she searches around convoluted levels to save the planet’s inmates before aliens explode out of them. But by not committing to either focus on the potential intensity of the game’s premise of action packed shooting, Alien 3‘s game adaptation firmly implants itself into unbalanced mediocrity.

The first way in which Alien 3 deviates from the film will become apparent as soon as one presses start. Rather than being unarmed, right off the bat players have access to the iconic pulse rifle from Aliens, a flame thrower, a grenade launcher, and a nice stock of hand grenades. There are also plenty of aliens to battle throughout the game instead of just one. While Fincher aimed to make Alien 3 more of a horror film compared to Aliens, the video game goes in the opposite direction. If the game focused on pure action this would be a great set up, however, despite the game being titled Alien 3 the aliens actually pose only a minimal threat. Instead, difficulty is created in the two most artificial and cynical ways possible:  A strict timer within which one must complete each level, and limited ammunition.

Fortunately, while ammunition is limited, the aliens aren’t particularly durable with the exception of some tedious boss encounters. There are also various points in each level where one can pick up extra ammunition along with temporarily functioning motion sensors. The latter is a bit useless however as the aliens’ iconic design makes them pretty hard to miss. That timer, however, is a huge mistake. Probe gives players a very short amount of time to explore and locate prisoners in each level. Every prisoner has to be found before one is permitted to progress, and players won’t stand a chance of even passing the first set of leels without either 100% memorization or a map of the layout of each area. The brick wall holding players back however isn’t the game’s shoddy jumping animation or horde of alien monsters, but running out of time before locating every prisoner and exiting the area. More than any other issue with the game, this is by far the most frustrating. It’s reasonable for a game to be challenging, but with Alien 3, mastery of the game comes from repetition rather than skill.

Alien 3 was originally developed for Sega Genesis by Probe, and released by Arena, a short lived publisher whose work ran the gamut from licensed games like Alien 3 and Predator 2 to big hits like Mortal Kombat and NBA Jam on the Genesis. While Alien 3 isn’t particularly outstanding, it can be fun in short bursts. It was quickly released on the Amiga as well via Acclaim and Virgin Interactive (though curiously only officially released in the US). Alien 3 on the Sega Genesis and Amiga were generally well received when they were new. Even at the time, however, the awkward soundtrack choice of music was notable. In issue 145 of Computer and Video Games, Amanda Tipping went so far as to say that “Unfortunately, the sound effects are crap, and the music sounds just like an alien chucking up, but these are minor points and otherwise don’t spoil this fab game.” However, she and many other Amiga reviewers generally appreciated the game’s graphics despite universal amusement at a horror movie featuring one alien being adapted into a game where you run around blasting tons of them.

Amiga Format’s (April 1993) review is particularly brutal though, questioning why such a rushed licensed game even exists. In a hilarious early display of “PC master race” syndrome, the reviewer often states that it’s a dumb shooter rather than a moody graphic adventure to fit the nature of the film because of idiot console players. “Consoles” are collectively blamed for it being a dumb action game while the reviewer simultaneously praises the variety of weapons and wishes the game had more shooting action. Despite their many grievances, Amiga Format still gave the game a 70% rating. Regardless of its initial reception, game publishers were on a mission to make as much money off of Alien 3 as possible. And so the same game was quickly programmed and released on the Commodore 64 and Sega Master System towards the end of 1992. Ports to the NES and Game Gear would also appear in 1993 and 1994 respectively.

The Commodore 64 version was again handled by Acclaim and Virgin Interactive, while Arena picked up the game for the Sega Master System. The Commodore 64 version is handled effectively, with good use of the C64’s color to create a darker environment that, while not as technically impressive, is actually more representative of the film than some of the brighter areas found on the Genesis and Amiga game. It’s successfully dreary looking rather than just appearing washed out. The Master System game, however, attempts to ape the Genesis version, and is worse off for it. Though one thing that stands out is that, somehow, the aliens on the Master System release are quite detailed compared to anything else in the game, but since the basic structure and pacing is still the same one barely gets a chance to look at them. While late to the game, the 1994 Game Gear release is actually just the Sega Master System version verbatim, with a smaller field of view. These last two ports make switching weapons a bit awkward, as players will have to use some directional inputs and the jump button at the same time, a recipe for disaster for a game where even the original version’s controls and platforming are a bit awkward. Fortunately, some trouble can be saved by switching to the grenade launcher upon starting a new level, as with the other versions it’s the most efficient weapon to use in any situation. 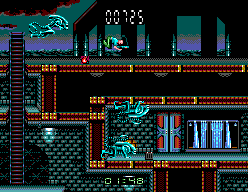 The NES version is impressive at a glance for having a slightly different look, some rearranged levels and an original soundtrack, but is actually the most frustrating version of the game to play. Despite having all of the same weapons from the other versions, the amount of damage each does is mostly the same. So there’s no point exploring for extra ammunition for your “more powerful” weapons. Visually, while the scenery is nicely varied for an NES title the character graphics are murky and barely animated. Both Ripley and the aliens look awful here. The worst part of the NES version, however, is the absurdly strict timer. Even compared to the game on other systems, after an almost perfect run through a fully memorized level one will often reach the end with under a minute remaining on the timer! There are even a few points in the game where if a single wrong turn is taken, it’s already a given that the level cannot be completed in time. This absurdly strict timer manages to be frustrating despite each level having fewer prisoners to find than other versions of the game!

The game’s controls have also taken an acidic dip in quality on the NES. Ripley is especially twitchy in this version of the game, and players will have a great time accidentally running off of platforms instead of jumping from them. As a final insult, Ripley can no longer use firearms while climbing up and down ladders, and is instead only allowed to drop a hand grenade. It’s like extra care was taken to make every aspect of navigating Ripley through the game take more time than it did previously.

While the NES version was still developed by Probe, it figures that an almost decent game would be rendered frustrating almost to the point of being unplayable when being published by…LJN!

The same LJN responsible for many stunningly terrible licensed games like Back to the Future and The Uncanny X-Men on the NES among others. The game does have one bright spot though: Jeroen Tel’s excellent soundtrack. While he is most fondly known by fans for his work on Commodore 64 games like Cybernoid, his NES Alien 3 soundtrack is a perfect mix of sinister determination. It’s much more appropriate to the dark look of the game than Matt Furniss’ more fun Amiga and Commodore 64 soundtracks. It’s always a treat to hear Tel’s music playing on the NES, making the sound test the only good part of this version of the game. 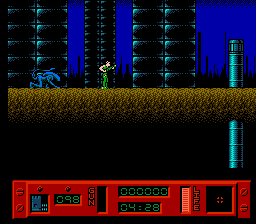 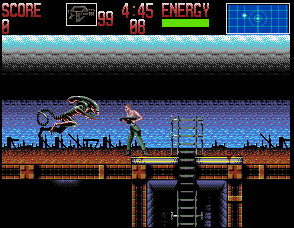 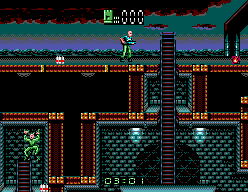