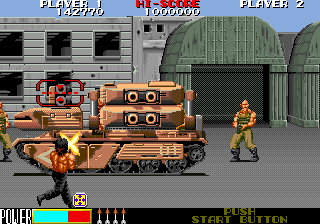 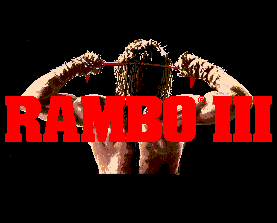 Taito’s arcade game based on Rambo III is an over-the-shoulder shooter similar to Cabal and Nam 75. Two players can take on the role of either Rambo or Colonel Trautman, using either machine guns or explosive arrows, both of which can be powered up. Unlike other, similar games, there’s no way to aim your gun without moving your character. The first stage just scrolls left to right, but all of the later stages feature 3D scrolling graphics using some simple scaling effects. It’s not nearly as impressive as Konami’s G.I. Joe, which used something similar for a more exciting effect. There’s no cover to hind behind, so all you can do is run back and forth, hoping to not get hit. 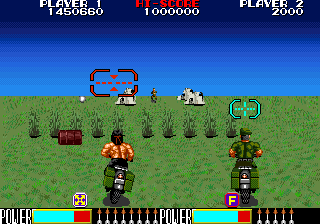 Admittedly, it is pretty cool when the screen warns you with the text “MAKE PRECATIONS!!! ENEMY’S AREA”, and then you see a whole army of soldiers, tanks, and helicopters charge at you from over the horizon. But they toss so much stuff at you that it’s nearly impossible to dodge. It’s kinda fun, but far from spectacular. Strangely, the European version includes different stages and altered enemy sprites – nothing too notable, it’s just weird that it was changed at all. Instead of a credit roll, you’ll see various digitized cutscene pictures. 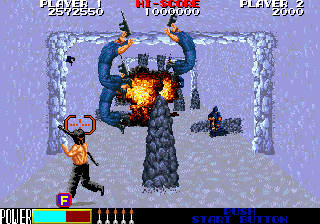