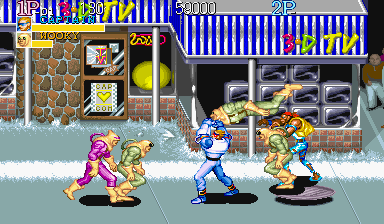 Final Fight was a huge success for Capcom, and thus the company followed it up with a number of similar games. Captain Commando was in the first wave to be released in 1991, along side The King of Dragons and Knights of the Round. Rather than taking after the gritty urban styling of Final Fight, instead it’s inspired by America comic books, featuring a superhero team in the year 2026 who protects Earth from criminals. The opening levels in the game actually take place in Metro City, so it is technically in Final Fight (and therefore Street Fighter) canon. The name of the hero – CAPtain COMmando – is taken from the mascot created by the Capcom of America marketing team to advertise its NES titles (and was said to be the hero in the NES version of Section Z, even though the character was originally unnamed). However, the character here has been completely redesigned, and given a cast of oddball combatants to fight alongside him.

The hero of the game, Captain Commando’s real name is Mars Carlisle, a billionaire by day who fights crime in his spare time using his super suit. The designers patterned this concept on Tony Stark / Iron Man.

Ninja Commando is a ninja named Ginzu (Sho in the Japanese version). He’s part of the same martial arts school as Guy (from Final Fight) though he attacks with a sword. He’s also the only character who is capable of attacking with ninja stars, whereas they’re just point items for the rest of the cast.

It’s a genius baby riding in a large mecha. His name in the overseas version is Baby Head, but his full official name in the Japanese version is Hoover J. Estefan. Weirdly, he can still climb into other enemies despite already riding his own, leading to some strange looking mecha-on-mecha riding.

An alien who fights to defend Earth, Mummy Commando is named Mack the Knife, a reference to a Bobby Darin song (and renamed Jennety in the Japanese version), and dual wields daggers. 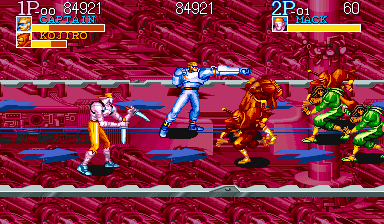 The action, as with most Capcom beat-em-ups, feels pretty close to Final Fight. However, the game now allows for up to four simultaneous players, which meant that the character sprites size is scaled back drastically. As a result, it doesn’t quite feel the same, despite mechanically being almost identical. It does play a bit faster, owing to the fact that you move forward when performing combos (instead of being forced to stand still), and you can run by hitting forward twice, which allows for strong dashing attacks.

Since the main characters are meant to be superheroes (and two of them have their own blades), the arsenal of secondary weapons has been expanded to include missile launchers, hand guns, rifles, laser guns, hammers, and a paralyzing ray. The weapons with ammunition disappear after a few uses, though unlike Final Fight, they can be carried between scenes (though not levels). Certain enemies also pilot mechas, which you can mount yourself once you knock their pilot off. There are a few varieties of these, which can punch, shoot flames, or freeze enemies. The main characters still have their crowd-clearing health draining super moves, though Captain Commando has an extra (non health-consuming) move that shoots flames from his wrists, though this is only done as an awkwardly executed jump attack. 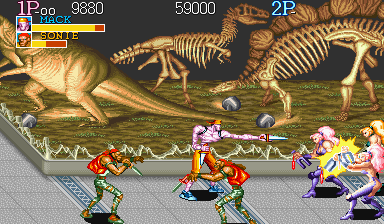 Enemies include the usual array of braindead mooks (with names like Wooky and Dick), but there’s also Marvin, the short fire-breather (who has an unfortunate propensity to attack from the sides in formation and accidentally burn his fellow villains); Carol and Brenda, this game’s version of Poison and Roxy, the sexy women who attack with electric tuning forks (and whose pony tail hairstyle seems to have been reused for Maki in Final Fight 2); and Z, who wear suits like an H. R. Giger alien and attack with huge claws. Near the end of the game, you fight a shapeshifter who mimics your character, named Doppel; the final boss is a flying robot-like creature named Scumocide (Genocide in the Japanese version). (The American SNES ads use the catch copy “Commit Scumocide”.) 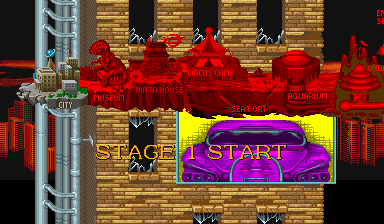 The stages are more diverse than Final Fight, offering a bunch of entertainment-styled stages, including a museum, a circus, a ninja house, and an aquarium. There are nine in total, but they’re pretty short, so the game length is still about the same as other Capcom beat-em-ups. This includes a sort of bonus level that takes place on a surfboard, which are similar to levels seen in Konami’s Teenage Mutant Ninja Turtles arcade games. This also means more boss fights, one of the reasons why this ends up as being one of Capcom’s more difficult beat-em-ups.

Captain Commando is a darn good game (pretty much all Capcom beat-em-ups have some baseline level of quality), but certain aspects just seem…off. The strange character designs aren’t really charming so much as bizarre. The hero, in particular, looks a little weird – since he’s supposed to be wearing a super suit, his head ends up being a bit tiny in comparison. The level themes seem cool in theory, but the stages are so short that they end up feeling inconsequential – in the museum stage, you see a prehistoric display, then are dropped into a basement for the boss fight, then it’s onto the next area. The later areas are a little less interesting, being that they’re the more typical sci-fi styled bases (though since one of them is underwater, you do get to see domed cities below the ocean in the background). It’s also weirdly violent – characters can get cut in half using a bladed weapon, or in the case of Mack, their flesh melts off their bones. (If this happens to Baby Head, his mecha in sliced in two and he throws a brief tantrum before respawning, which is pretty amusing.) Overall, it’s weird but not quite weird enough – Capcom’s later Battle Circuit implements this concept more consistently and creatively. It’s also a better game, though that’s owed to the refinement of design and technology over the years.

Captain Commando eventually hit the SNES, though it didn’t actually come out until 1995, as the SNES was entering its twilight years. It plays well, but has the usual compromises for console player – four player simultaneous action has been reduced to two, the number of onscreen enemies has been cut, and the animation has been cut back. The female characters have more clothes, the gore is gone, and the rideable mechas have been totally removed. Otherwise, it’s a fairly good port. A Sega CD port was planned at some point but was cancelled before it was even shown publicly.

It was also released in 1998 for the PlayStation in Japan, with the port developed by New Corporation, who had also created the PS1 platformer Chippoke Ralph no Daibouken. This is a nearly arcade-perfect release, and includes three player simultaneous play (four with a secret code) as well as arranged music. Since it was a dated beat-em-up released for the PlayStation, there were few copies sold, and it has since become one of the most expensive titles for the system.

Since then, emulations of Captain Commando have popped up on Capcom Arcade Classics Vol. 2 (PS2/Xbox), Capcom Arcade Classics Reloaded (PSP), and Capcom Beat’em Up Bundle (PS4/XB1/Switch/Windows). The latter compilation lets you switch between regional versions if you want to see the characters’ original Japanese names. 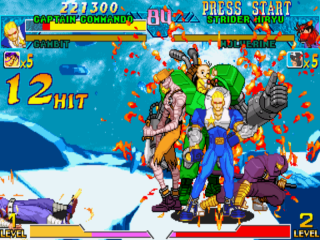 Captain Commando and his crew have popped up in several later Capcom games. He’s a playable character in the first two Marvel vs. Capcom games (which his team acting as helpers in the first game). For his win quotes, he dishes out assorted Capcom trivia. He’s also appeared in various crossover games, including the quiz game Capcom World 2, the strategy games Namco X Capcom and Project X Zone 2, and all of the heroes pop up in SNK vs. Capcom: Card Fighters Clash. Captain Commando also pops up in the costume party in Ken’s background in Street Fighter Alpha 2. A manga starring the team was also published in Comic Gamest 1994, which was partially compiled into two books and translated into English by Udon. 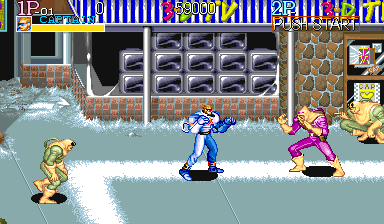 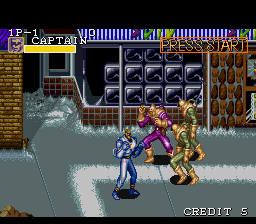 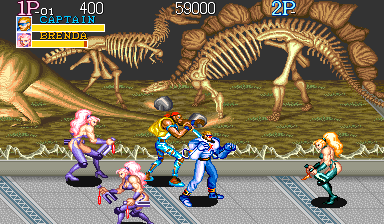 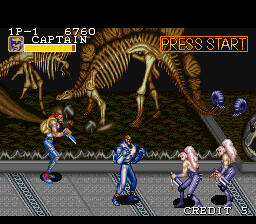