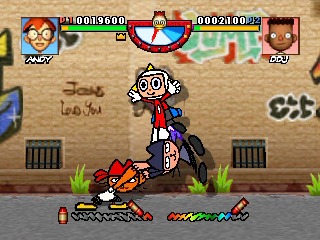 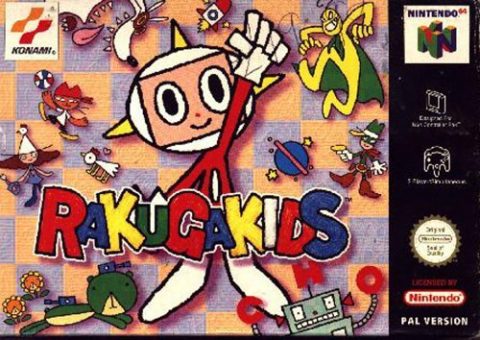 The N64 wasn’t really the best system for traditional fighting games (Super Smash Bros. notwithstanding, of course, if you want to get into that argument.) Besides ports like Bio Freaks and War Gods, all there was were badly-made games like Dark Rift, Deadly Arts, and Clay Fighter 63 1/3. One N64-only fighter managed to give fighter fans the enjoyment of Capcom’s games, on a system that never had any. In 1998, Konami Computer Entertainment of Kobe, the same folks behind the N64 Castlevania games, created Rakugakids (“rakuga” being Japanese for “graffiti” or “doodles”), a quirky, creative 2D fighter that never reached American shores.

The plot goes as such: In the peaceful city of Twinkle Town, six kids find a box of eight magical crayons inside a cave. They divide the crayons among themselves, but the neighborhood bully steals the other two and the box. He discovers that anything drawn with the crayons comes to life. The kids decide to draw their own doodles to get the crayons back. (After beating the stuffing out of each other’s doodles, first.) 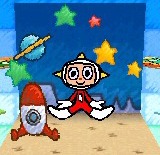 A pulp sci-fi style spaceman, who’s more or less this game’s Ryu. Worth playing if only for his Defence Magic, where he straps the opponent to a rocket, where they fly into space, shortly before slamming back into the ground. 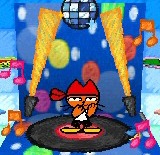 One of the game’s faster characters, CCK uses musical instruments, basketballs, and boomboxes to fight. He can also set himself on fire at will. 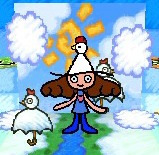 A witch with a chicken shaped hat with a mind of its own, Marsa has the ability to triple jump, and her ‘Marsa Jump’ will send her flying high into the air where she can avoid danger. 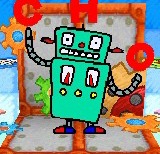 The bruiser character, C.H.O’s slow and doesn’t have the range or combo potential of the other doodles, but he can do a lot more damage then they can. 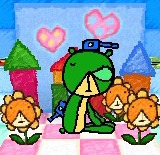 A sleepy teddy bear equipped with tank treads and rockets, Beartank has more chaining ability than the other fighters. It can also make illusions of itself to confuse opponents. 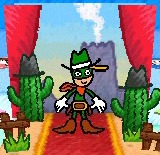 The Ken to Astronot’s Ryu, this stereotypical cowboy has moves a lot like Astronot, only with a little less speed and a little more power behind them. 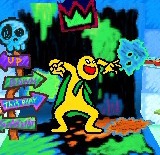 Mamezo doesn’t have any chaining potential, but he’s got a lot of projectiles, and he can also morph his body into things like scissors, an iron, and a spoon.

The game’s secret boss, encountered by beating Darkness without losing a single round. He’s only a pallete swap of Mamezeo with a couple of different animations and harder AI, though.

The final boss of the game, Darkness is a ghostly dog-like creature with some powerful moves, like teleportation, and as Wolverine-esque slashing barrage. 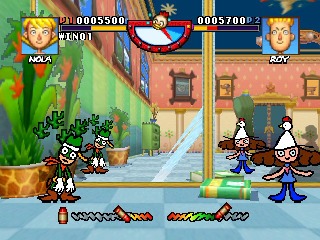 All the characters are paper-flat doodles, similar to Treasure’s Rakugaki Showtime, NanaOnSha’s Parappa the Rapper, or Nintendo’s Paper Mario. The fighters have a lot of interesting attacks, and the animation is gorgeously smooth. Despite taking place on a 2D plane, the backgrounds are fully 3D, but they aren’t as interesting as the characters, though, and they’re all static. The soundtrack’s made up of surfer rock, which is an interesting choice, plus the sound quality is great for an N64 game, but none of the tracks ever really stand out.

The basic setup is a bit like Capcom fighting games, particularly the Marvel VS series. There are three punch buttons and three kick buttons – a bit awkward on the normal N64 controller – plus a taunt and “Magic” button. Every character can double jump, and do a “Cyclone Attack”, which knocks the opponent through the air and bounces them toward you, giving you an opportunity for a mid-air hit. Every character also has three different super attacks, with the super bar represented as a crayon coloring in a gray line. Super attacks are done by holding a direction and hitting the Magic button, or you can do a more traditional fireball style input. 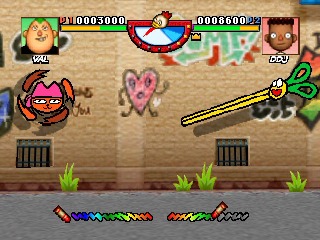 For the most part, Rakugakids is fairly decent. It doesn’t offer much innovation from any other 2D fighter besides its art style, but it plays reasonably well. The major problem is that the action feels kinda stiff, because the attacks don’t really flow into each other well and combos are hard to pull off. Plus, the awkward dimensions of some of the characters can make judging attacks difficult. But the game’s charm goes a long way towards differentiating itself from practically everything else out there, which counts for a lot. There’s also some brief loading times between matches, which is odd for a cartridge game. 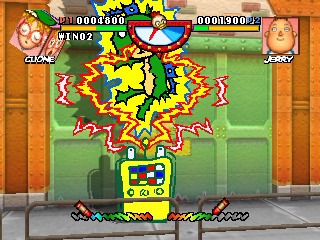 An interesting idea that wouldn’t be seen again until Virtua Fighter 4 is the Training Mode. You choose a character, and fight through as many opponents as you can. Supposedly, the AI will learn how you fight as you go, and you’ll be able to use this custom character to play through the game’s arcade mode. In practice, though, your character probably won’t be as smart as any good human player.

Rakugakids was never released in America, for whatever reason – perhaps it was a bit too cute, but then again, this is the Nintendo 64, where children’s games seemed to proliferate – but it got an English release in Europe. It wasn’t completely forgotten, as Beartank made a couple of cameo appearances in Castlevania: Circle of the Moon and Konami Krazy Racers. You can turn into the bear by equipping the Pluto and Black Dog cards, and wearing the Bear Ring. These are both pretty annoying to obtain, but the Beartank has extremely high offense, as well as some special moves carried over from Rakugakids. However, he can be killed in a single hit. Songs from the game also appear in a few Bemani games.