Fan favorite developer Treasure made a name for themselves with the Genesis title Gunstar Heroes, which took the action-shooter template from Contra and turned it on its head. Later, they took on the beat-em-up genre with their Saturn title Guardian Heroes. But while Treasure had attempted to invade the mascot platformer field with their Genesis title Dynamite Headdy, their first attempt at a full blown, Nintendo-style Super Mario Bros. type game was Mischief Makers. It’s actually far closer in structure and function to Super Mario World or Yoshi’s Island than any of Nintendo’s efforts for their own 64-bit system, and does an admirable job at mimicking Nintendo style games while possessing a flair of its own. 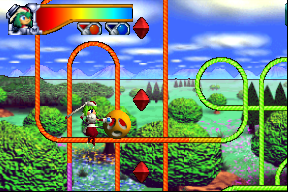 Mischief Makers focuses on a crazy scientist named Professor Theo and his robot maid, The Ultra InterGalactic-Cybot G, Marina. They’ve just landed on the planet Clancer, which is inhabited by a strange looking race called the Clannad, Practically everything on this planet – creatures, floors, structures, etc – consist of the same face, designed to look after a particular type of Japanese Haniwa statues (similar to the famous Cactuars from Final Fantasy.) It’s an interesting look, but it doesn’t quite cross the cultural gap, and it actually looks more creepy than endearing – it’s actually a bit closer to the classic Halloween mask made infamous by Wes Craven’s Scream franchise of horror movies. Despite their unintentionally creepy appearance, the Clannad are generally friendly, but they’re also pretty naive and are often manipulated by more sinister forces. As such, there’s a mysterious group controlling a faction of the Clannad, and they’re off to make lives miserable for Marina and her professor pal. You see, the professor has a nasty habit of getting kidnapped – he’s not terribly bright – and it’s up to Marina to dig him out of whatever trouble he’s gotten himself into. 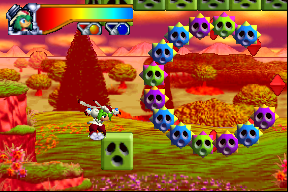 The directional pad controls Marina, while the A button is used to jump, and the B button is used to grab objects. In Gunstar Heroes, you could pick up practically any enemy and chuck them at your foes – similarly, you could grab bombs in mid-air and chuck them back. Mischief Makers takes this concept several steps further. Like most Nintendo-style platformers, there are no direct attacks – rather, you can pick up enemies or items, and toss them to knock down anything in your way. This extends to more than just bad guys – you can grab bombs, ninja shurikens, missiles, boomerangs, or pretty much anything else they’ll toss at you, and just lob it right back at them. You can also shake anything you’ve grabbed, usually robbing enemies of gems or other goodies. 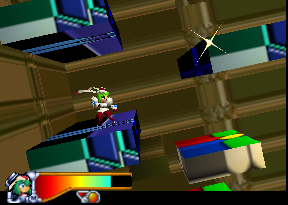 Being that Marina is a robot, she’s equipped with a pair of jets in her shoes. Using the C-buttons, you can propel yourself in any of the four directions. Although you can’t exactly fly, you can use this function to hover, or to extend the lengths of your jumps. You can also double tap the directional pad to activate the boosters, but the C buttons are usually easily to use. Additionally, each level usually has a number of floating circular heads, which can be latched on to. Most of the platforming challenges involve leaping from head to head, which is trickier than it sounds. You can also tug on these heads when you’ve grabbed on to them – sometimes these act as triggers, opening up hidden passages, but other times, the heads will be traveling along linear tracks, and pulling them will hop between the lines. The controls do take a bit of getting used to, and you might end up flinging yourself in the wrong direction, or missing the timing when grabbing onto heads, but it’s pretty fun once you get ahold of it. 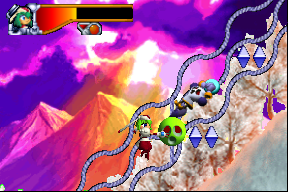 The levels are neither involved nor as expansive as anything in Super Mario World – some are actually pretty short – but there’s a remarkably amount of variety between the five worlds and fifty two levels. Some stages are little more than town segments, where you talk to the friendly Clannad and learn helpful hints or background information. Some are straight forward, flat out action sequences, where you just need to barrel over hordes of foes to survive. Some are more focused on tight platforming. One stage forces you forward as the floor explodes underneath you. Another is a huge tower that tilts the entire screen back and forth, in an almost impressively nauseous fashion. A number even feature simplistic puzzles to solve. One stage has Marina balancing on the back of a missile, requiring that you shift your weight to navigate it through narrow corridors. Another consists entirely of Track and Field style events, like button mashing 100 meter dashes and long jumps. 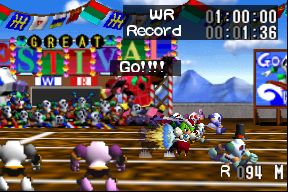 Each level is also filled with red gems. Unlike most platformers of this type, Marina actually has a huge health meter – you simply lose a bit of health and need to restart a given section if you fall into a pit – but only one life. As long as you have enough gems, you can continue, which starts you at the beginning of the stage. This mechanic doesn’t entirely make sense, considering that the game saves your progress after every level anyway, so it’s completely unnecessary to have something that keeps track of your “lives”. Anyway, you can try to head straight for a level exit if you wish, but the real goal of each level is to find the single hidden yellow gem, which usually requires a bit of searching. The number of yellow gems determines how much of the ending you can view – there’s literally a counter at the bottom of the screen that ticks down based on how many you’ve found, and when it hits zero, it ends the game, requiring that you revisit previous levels to find more. Finding some of these can be a real hassle, especially in the boss stages – you usually need to beat them without getting hit, and given the imprecise nature of the grabbing mechanics, this can be a bit frustrating. 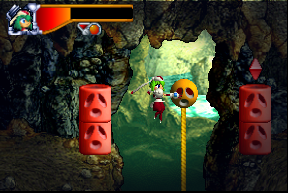 But that’s mostly a minor aggravation, because fights are generally pretty impressive, per usual Treasure standard. Most of the mini-bosses are pretty simple – watch for the targets that indicate their weakness, grab them at the right moment, and slam them right into the floor. However, the boss encounters at the end of each world are significantly more advanced. In the first real fight, you face off against a gigantic dragon in a sea of lava, along with his significantly smaller pal, who floats (mostly) harmlessly in the sky. At first, you realize that you need to wait for the big guy to punch you, grab his fist, and sending it flying straight back into its chin. However, try this a few times, and the junior lizard floats by and heals him. Not content to let you get this down, you still need to grab the fists as they fly, and instead toss them at the floating guy. Soon he’ll begin tossing lightning bolts at you, which makes the whole process more difficult, but once he’s out of the picture, the big dragon gets angry and tries to fake you out, again changing up the strategy of the fight. 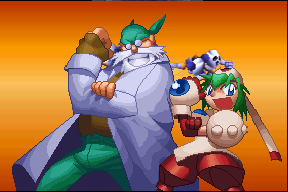 In another boss battle, you’re riding on the back of a tiny little cat, being chased by a bad dude on a motorcycle. To beat him, you need to grab one of his missiles, shake it to make it more powerful, then toss it back. Eventually he’ll drop his machine gun, at which point, you need to grab him and carefully aim at his weak point, all while he’s dashing across the screen. In true cinematic fashion, the screen zooms out like a fighting game to show off the whole playing field, which looks really cool.

Indeed, the Nintendo 64 was an odd choice for a platform, seeing as how almost everything is sprite based, with polygonal graphics only used for a few select levels, like the tilting tower. Some of the graphics, particularly the Clannads, have a computer rendered feel to them, which feels a bit dated, but the rest of the visuals are pretty decent. Although most of the stages throughout a given world use the same tilesets, most take places at different times of day, so most of the outdoor levels feel relatively unique. The parallax scrolling on the ground is also pretty impressive, so the game looks quite a bit better than your average 16-bit title, although perhaps not as impressive as something like Symphony of the Night, or even Treasure’s own Guardian Heroes. 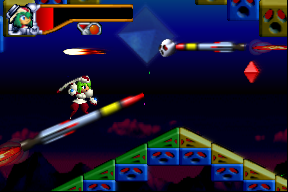 The bosses are undoubtedly the coolest part though. Like Treasure’s Genesis game, most of the bosses actually consist of several sprites that are independently animated to create one single, huge enemy. The Nintendo 64 is a much more powerful machine than the Genesis, and the individual sprites here are much more detailed than the simplistic balls or blocks used in Gunstar Heroes and the like. The music is also extremely distinctive and quite catchy, definitely one of NON’s best works since Gunstar Heroes. The voice clips, dubbed in English in the American version, are generally pretty amusing (like the beleaguered cry “HELP ME MARINA!!!” when the professor is in trouble, or the ubiquitous “SHAKE SHAKE!” when Marina rattles something she’s grabbed.)

The ravages of time have not been particularly kind to the Nintendo 64 – while its competitors had a number of 2D games that have aged gracefully over the years, a huge amount of the games on the system relied on blurry, choppy 3D, with only a handful of Nintendo’s own titles that still hold up. In that respect, Mischief Makers is one of the scant few titles in a league of its own, and still one of the must own titles for the system. It’s also one of the only games that actually does a damn good job at matching Nintendo’s own style of platforming games, something Nintendo itself seemed to have lost after Yoshi’s Island on the SNES. 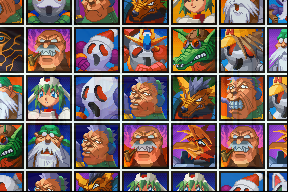