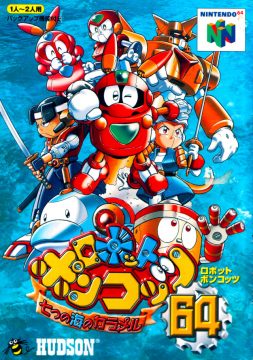 The same day the special editions of Robot Ponkottsu hit the Game Boy Color, Hudson released Robot Ponkottsu 64, this time developed solely by Red Company. While some might think it’s notable for being one of the few N64 RPGs, or even better, a console Pokémon style game, it’s something much stranger than any of that.

The translated subtitle, Caramel of the Seven Seas, is slightly indicative of the game’s new content. Riding around in a fish-shaped submarine, players explore a massive a water world defeating pirates in Robopon battles. You farm for gold, garner parts to improve your Robopon, and move on to the next slew of battles. It quickly becomes a chore, a laborious and repetitive process that’s more simplistic than the original Dragon Quest. 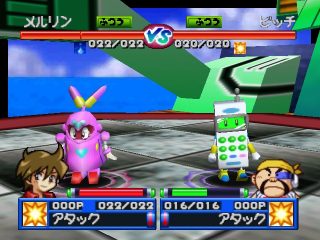 All the Robopon basics are still in place: monsters have hit points, energy points, attack, defense, and speed, although they do not level up. Parts and software work exactly the same, although now stores are on random islands sprinkled across the waterscape. Without Japanese knowledge, this tends to be difficult, but it’s possible to simply keep purchasing the most expensive items and power level through combats without much thought.

Robot Ponkottsu 64‘s most drastic change is to how battles play out. Whenever you fight, you enter a real-time 3D battle in a large arena circle. Abilities must charge up before using them and positioning becomes very important as long-range attacks can be easily dodged. Certain strong Robopon have faster charge bars, specifically in the tougher boss battles. A small-winged man named Mr. Brownie, who occasionally appeared to give the player some special items in the last game, randomly drops a ball into the arena that gives the player a quick HP and EP boost. 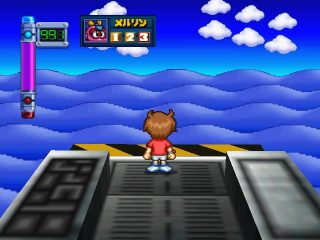 Even more bizarre is the maintenance required to get more Robopon. Rather than simply catching monsters, both software and Robopon seeds must be grown in your lab in an electric dirt patch. You must have your Robopon clean the room over a span of several days or else rats will appear and eat whatever is growing. This basically amounts to having your creatures sweep and sleep repeatedly. It’s even more tedious than battling pirates all day. Players can use the Transfer Pak to upload their robots from the Sun, Star, and Moon versions of Robot Ponkottsu into the game, which would make this step totally unnecessary and thus make the experience less boring.

Like the first game, several mini-games are available on your ship that improve certain Robopon stats. These are much more varied and entertaining this time around, including tug-of-war, a scrolling platformer, a static shooter, a weird bull throwing game, and a competitive rowboat race. 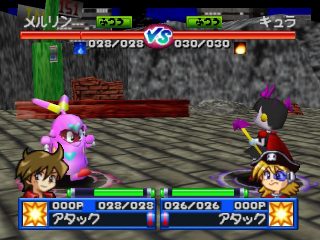 The graphics are also striking for an N64 title. On the ship, characters are shown as 2D sprites wandering around a relatively detailed 3D environment. Battles themselves look great: the 3D Robopon obviously had a lot more effort put into them than any other aspect of the game. The only negative aspect is the drab world map. All opponents and islands look the same, making it difficult to easily navigate the open sea. Sometimes the player gets to travel through an ugly maze of roller coaster tubes that function as a linear dungeon with see-through walls, although the silly pan and zoom camerawork can’t make up for the barren visuals.

Those looking for monster breeding on the N64 might enjoy it, but Robot Ponkottsu 64 is subpar on every level. Without any real dungeons and full of menial dirt-tending, it’s another half-finished product rushed out for the holiday season.