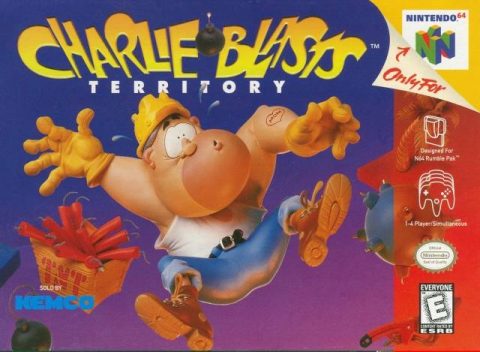 In between the time it took for Kemco to decide to release The Bombing Islands stateside, Realtime Associates would develop their own version for the Nintendo 64, featuring different characters and an altered level set. Titled Charlie’s Blast Territory, the game feels like a quickie port from the PlayStation, though a few key changes and additions do keep it from falling into total irrelevance.

One of the most interesting of these are the new levels designed by renown puzzle designer Scott Kim. While he’s worked on games like Sega’s Myst clone Obsidian and Disney Interactive’s Heaven and Earth, Kim’s prior repertoire goes beyond video games. His pen-and-paper puzzles, often built around patterns in math and writing, have been published in a number of educational publications, including Discover Magazine and Scientific American.

But as ingenious of a puzzle designer as Scott Kim is, the new puzzles in Charlie Blast’s Territory aren’t a massive improvement over those in The Bombing Islands, and in fact several levels in this game are lifted straight from Kid Klown‘s. The game in general feels a little more challenging from the onset, however, with many of the introductory stages throwing in more level gimmicks than the early stages in The Bombing Islands, and without the cute little pre-level demonstrations from that game. Then again, as there’s still no lives system, and since restarting a level is just as easy as ever, figuring out the early levels and some of the new mechanics/obstacles never feels like a demanding task.

A major additions for this port is a jump button. In The Bombing Islands, Kid Klown could jump, but only if you walked him onto a bed of spikes. While Charlie’s Blast Territory still features non-lethal spikes (in the form of suspicious-looking snakes in holes), jumping is now an ability he has from the get-go, and some of the game’s new and altered levels reflect this. Additionally, unlike Kid, Charlie can push around the Red Bomb after it’s been lit, adding the need to react quickly to solve certain puzzles.

Actually, with the new levels featuring more in the way of conveyor belts and moving platforms (another obstacle exclusive to this version), timing-based puzzles figure in more heavily than in The Bombing Islands. One level in the first world expects the player to push bombs on an array of moving platforms, and then waiting until the platforms are all aligned with the Red Bomb before lighting the fuse. Another level has Charlie pushing bombs onto a seemingly complex system of conveyor belts in order to align them correctly on a platform moving back and forth. There’s no denying these types of puzzles make clever use of the game’s engine in ways The Bombing Islands never did, but this doesn’t necessarily make them more fun or less tedious to solve.

Presentation-wise, the game is a good deal worse. The Bombing Islands had colorful, high-contrast graphics, and a main character that carried a lot of whimsy in the way he moved and reacted. By contrast, Charlie Blast just doesn’t have that same amount of character to it. The music is more subdued, the main character isn’t nearly as appealing, and the graphics look somewhat more muddy. While Charlie does have his own set of cartoony animations, these tend to be recycled pretty heavily and don’t really say much about his character, other than he’s a bumbling construction worker. The game also runs at a choppier framerate and lacks some of the visual details that differentiated The Bombing Islands‘ different worlds, like how the water in the tropical world would suddenly change to sand in the desert world and lava in the fire world; in Charlie Blast’s Territory, it’s always just water.

Like its immediate predecessor, Charlie Blast’s Territory has 60 stages and 6 worlds, though there aren’t a second set of levels to unlock afterward; beating level 60 gives a password (which is also handled with playing cards) for a “Level 61,” though inputting it seemingly does nothing for the single player “Puzzle” mode.

Instead, clearing stages in the single player mode unlocks new stages for the “multi player” mode, which isn’t so much a Bombuzal-style alternating game as it is a Bomberman-style party game. Controlling one of four characters on a selection of up to 45 different levels, players must either blow each other up in ‘Survivor Mode” or capture the most territory before time runs out in “Territory Mode.” Blowing up bombs won’t damage the ground below in either case, but bombs in Territory Mode will instead paint the ground a certain color depending on the player who lit the bomb. Capturing territory is a matter of painting as much of the grid with one’s color, while avoiding being blown up by enemy bombs (as that erases the dying player’s color entirely).

While not exactly the chaotic orgy of flame and death that is a Bomberman‘s multiplayer session, the inclusion of a mode like this does enough on its own to justify Charile Blast’s Territory, which is otherwise kind of forgettable. It’s also the only time characters in the game’s “story” show up in any meaningful capacity, as the player characters include Charlie’s nemesis “The King of Industry,” the King’s right-hand brute “Hench-Troll,” and Charlie’s girlfriend “Rainbow Fairy.” According to the manual, the game revolves around Charlie’s struggle to dismantle The King of Industry’s pollutant-spewing dams surrounding Rainbow Valley Lake, but as none of this anti-establishment plot is featured in the game, its relevance is negligible.

Charlie Blast’s Territory may not be a great port of The Bombing Islands, but it’s by no means unplayable. It’s an ugly game with barely a shred of personality, but that has no real bearing on the game’s real value as a puzzle game. And, in that regard, it’s really no better or worse than The Bombing Islands; while levels tend to be more compact and have more interesting challenges to navigate in this game, some of the new levels here feel just as tedious as The Bombing Islands‘ worst. As it stands, it’s no more than a decent puzzle game with a decent multiplayer option.

Links:
An incredibly in-depth walkthrough for Charlie Blast’s Territory, as well as an overview of the multiplayer features.
Video companion to the above Charlie Blast FAQ.