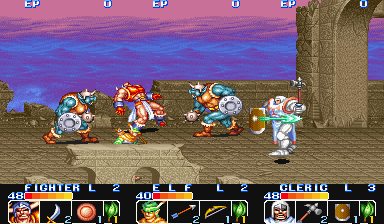 Capcom had a small thing going with swords and sorcery arcade RPGs, starting with 1987’s Black Tiger and evolving into 1990’s Magic Sword. 1991’s The King of Dragons follows up on that, though moving away from side-scrolling action and placing it the form of a Final Fight-style beat-em-up. The goal is to venture through the kingdom and destroy the great dragon Gildiss. Like most Capcom arcade beat-em-ups post-Final Fight, the game allows for three players simultaneously. 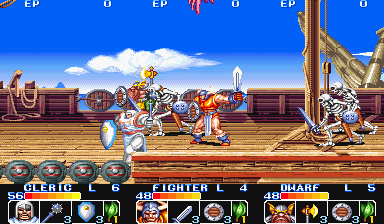 You take on the role of one of five fantasy RPG archetypes, who have names in the supplementary material but are just called by their character class within the game. Each has different abilities, ranging from strength, speed, HP,  magic strength, and level. The Fighter (Derek) and the Cleric (Aldo) are similar, wielding melee weapons, with the Fighter having an edge in strength and the Cleric having higher defense. The Wizard (Lejei) has magical projectile attacks, which start off fairly weak but grows stronger over the course of the game. The Elf (Rabel) wields a bow and arrow for long range attacks, but is quite weak otherwise. And the Dwarf (Vargas) is similar to the Fighter but shorter, so his weapons aren’t as long but attacks from certain enemies fly right over his head.

The character’s score acts as their experience gauge, leveling up when reaching certain milestones and increased their life meter. There are also weapon and defensive upgrades routinely found throughout the journey to strength these abilities. Since there’s no exploration or any ability to back track, the speed of leveling is solely determined by how effective you are at scoring points, though there are a few hidden bonus items (like the Capcom icon Yashichi) to get bonuses. Since the other power-ups are granted anyway regardless of your score, the RPG elements outside of the fighting are pretty minimal, and seem more for show than anything. Those touches are welcome though – your extra lives are also indicated as curative herbs, for instance. The screen layout is pretty similar to Magic Sword, with the status bar at the bottom (rather the top, like other Capcom beat-em-ups) and even the status bar looks pretty similar, with an extra numerical HP indicator next to the life bar. 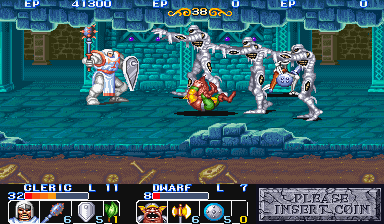 There are sixteen levels altogether, which seems like it might be pretty long, but the stages themselves are rather short, so the length ends up being standard for these types of games. What this does mean is that there are many more boss encounters, which in turn makes this fairly hard, even by the already high standards of other Capcom beat-em-ups. They are more interestingly designed than most, particularly the Wyverns, which take to the skies to attack. Gildiss, the final boss, is monstrous compared to these, with its gigantic body unable to fit in the background, so you can really only attack its head and arms. The stage 11 boss, the Dragon Knight, is also lifted from Black Tiger, loosely connecting the games.

Since the game is still technically kinda based on Magic Sword, the action itself doesn’t feel much like Final Fight. There are no combo attacks, just single weapon swipes or magic/arrow attacks. Many early enemies are disposed with a single hit, or are knocked back when taking damage, which makes the action feel a little choppier than other beat-em-ups. There are standard crowd control, health draining magic attacks for each of the characters, plus floating orbs occasionally found in treasure chests can also be attacked to cast a similar magic spell without having to use any of your life meter. The Fighter, Cleric, and Dwarf can also block enemy attacks by hitting backwards right before receiving a blow, but this is so difficult to pull off consistently that it’s not really all that useful. 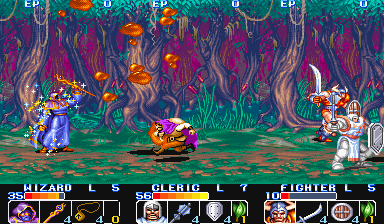 The King of Dragons is pretty good, with the same baseline level of quality as other Capcom games, with attractive visuals and an excellent score by Yoko Shimomura. But it feels like a weird midway point between the earlier Magic Sword and their Dungeons & Dragons beat-em-up duology, released in the following years. That later series further evolves the concepts presented in this game, while maintaining some the RPG elements that are missing here, like a shop system. That leaves The King of Dragons as basically just a weaker version of those, without the license it obviously wishes it had.

The game was ported to the SNES, and other than the graphical downgrades and changing from three simultaneous players to two, is a pretty decent conversion. This also maps the magic attacks and defense attacks to their own buttons, so it’s actually a little easier to play than the arcade release. Meanwhile, an emulated version of the arcade game is featured on Capcom Classics Collection Vol. 2 (PS2/XB), Capcom Classics Collection: Remixed (PSP) and Capcom Beat’em Up Bundle (PS4/XB1/Windows/Switch). While the magic gets its own button here, unfortunately the block ability does not. 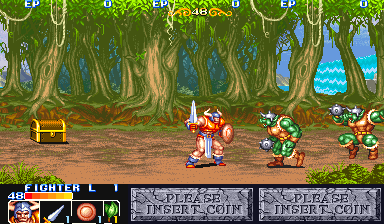 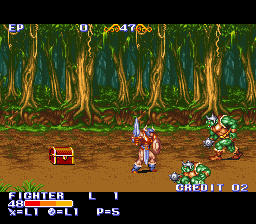