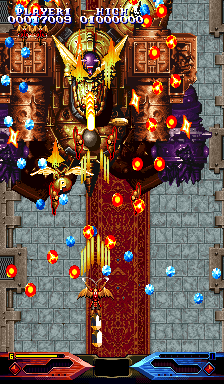 “ARE YOU GREAT?” asks the intro for Great Mahou Daisakusen, before immediately answering its own question, proclaiming “WE ARE GREAT!”. It’s the third and final game of the series, and is know as Dimahoo (pronounced “Die-ma-hoo”) outside of Japan. The English title sounds weird, but it’s actually a romanized mangling of the Japanese title (“daimahou”). Released in 2000, it was part of a push by Capcom to bring back shooters in the arcades. Their more successful games, like Giga Wing and Mars Matrix, were ported to the Dreamcast, but unfortunately Cave’s Progear and Raizing’s Dimahoo were left to wallow in relative obscurity. All of these games used Capcom’s CPS-2 arcade board. 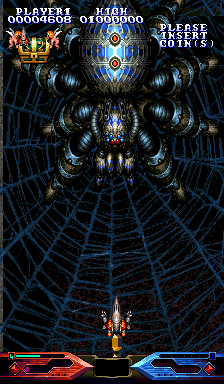 Dimahoo‘s setup is essentially an expanded version of the one in Mahou Daisakusen, explaining that the Earth is hollow, and a race of goblins have been living underground for centuries, plotting to take over the world. When the time finally comes for their attack, it’s up to heroic bounty hunters to save the world and stop the invasion. These goblins still have fantasy inspired monsters, like giant snails with turrets on them, turtles with mobile fortresses on their backs, and a ninja in robotic battle armor. It ditches the racing aspect of Kingdom Grand Prix, so it’s really more of a sequel to the first Mahou Daisakusen, though with improved visuals. It’s also a change of pace from the Shinobu Yagawa Garegga / Batrider / Bakraid trilogy, also by Raizing.

There are eight (four initial, four unlockable with a code) characters. In keeping with Raizing tradition, these hidden characters are from previous games.

Your character is equipped with two weapons that are fired simultaneously – a main weapon, which is fired by your character, and magic, which is fired by the two orbs that float next to them. The main power-up system works similar to the original Mahou Daisakusen, with money bags dropping coins that power-up your main weapon, and spell books enhancing your magic. One of the main gimmicks is that magic spells (and thus your character) have two elements – fire and ice – in opposite polarity. Some enemies and all bosses have an element associated with them, as well as their own elemental attacks. If an attack that is the same element as you hits you, you don’t die, but instead you’ll level down in shots and magic. If you use an attack of the opposite element on an enemy, you also do extra damage.

This sounds an awful lot like Ikaruga (which Dimahoo predates by about a year or so), but it doesn’t quite work the same way. Primarily, you can’t just switch elements with a single button, but instead you change every time you fire a charge shot. This is pretty annoying, because (A) it takes a few seconds to change polarities, and (B) when you fire a charge shot you’ll change even if you didn’t want to. It doesn’t really matter a whole lot since the levels have tendency to mix up enemies of both elements at the same time, plus most bullets don’t have an affinity anyway, so you’ll be killed if you get regardless. Anyway, it’s a neat idea in concept but it doesn’t really work.

The scoring system is a particularly oddball too. As you destroy enemies, your “bounty” meter increases. Whenever you attack with a charge shot, enemies will drop items based on the level of your bounty meter, which drains quickly as the power shot continues. There are well over 100 items to obtain, each grouped into different categories (food, armor, etc.), and when you collect all of the items in each category, you get a huge improvement to your character (faster speed, higher attack, a score multiplier, and so forth). Certain enemies will always drop certain classes of items, so if you’ve memorized these, then you can use your charge shots efficiently to collect all of the necessary items as soon as possible. However, if you haven’t learned these, then it all feels extremely haphazard. Collecting these items will also increase the rank, bringing that element in the Mahou Daisakusen series, although a bit more subtly than Yagawa’s games. 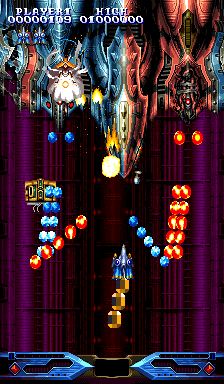 With most the elemental and bounty item collection systems, Dimahoo is needlessly overcomplicated in a way that doesn’t really benefit the game. And it’s strange because it doesn’t really need it – it’s significantly more difficulty than the previous games, and while it’s not quite a bullet hell shooter, it is much denser in its bullet patterns, and is thus significantly more difficult. In the other words, the original Mahou Daisakusen felt like an arcade-style Compile game, while Dimahoo feels a little more like a contemporary Cave game. And that would’ve been fine on its own, but it ends up feeling like it’s trying to do too many things at once.

Plus, although endings in shoot-em-ups are rarely all that important, the closing scenes here are still weirdly disappointing. They consist of microscopic white text and still frames of nature photographs with no context whatsoever. Compare that to Armed Police Batrider had more than twenty endings and it came out a couple of years before this. When you have cool characters like Miyamoto the dragon and three midget necromancers, it’s expected that you’d do something interesting with them. 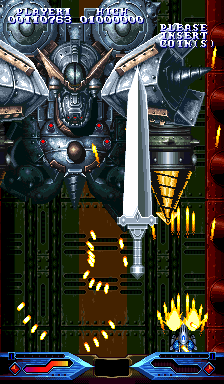 The game does look and sound brilliant, though, with some fantastic pixel artwork and an excellent soundtrack. One of the most amusing aspects is the announcer’s voice. He talks in this deep, booming, tone whenever you level up your shots or magic, he screams “ouch!” or “oh no!” when you get him, and he warns whenever a boss is approaching. He adds a bit of humor, keeping with the light-hearted tone of the series.

There’s plenty of fun to be had in Dimahoo, because of the core of the game is still solid, but it can’t help but feel like something of a swing and a miss for what it attempts to do.