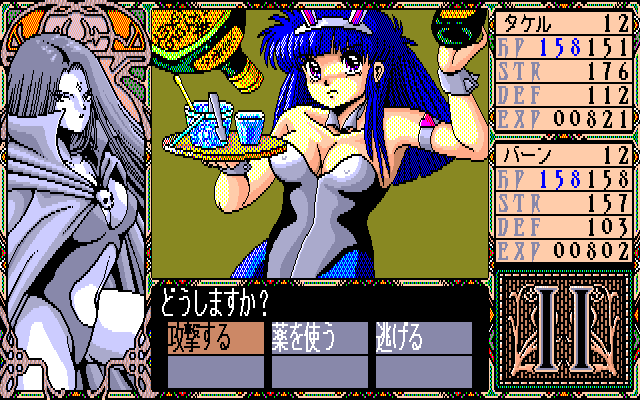 A sequel wasn’t planned when Elf made the first Dragon Knight, but the huge popularity and strong fan demand prompted them to start working on one immediately, and it got released just one year after the first game.

Takeru, having lost a bet against the traveling merchant Baan, is forced to go to the town of Phoenix to deliver a scripture in time of a wedding ceremony. He arrives safely, delivers the scripture to the town elder, and decides to spend the night there. The next morning, he finds all the town women missing. After trying to make sense of what happened, the elder explains that Phoenix used to be under the rule of two opposing factions 300 years ago, the Witches clan and the Dragon Knights clan. One day, the dragon knights made a surprise attack against the witches, which resulted in a battle that is said to have lasted three long days. By the dawn of the fourth day, both clans had disappeared, and only humans remained in the land. However, three years ago, Mesaanya, a descendant of the witches appeared again, and she wouldn’t allow women and men to fall in love as long as she was around. The Witches were a clan of women and the Dragon Knights a clan of men, and she couldn’t forgive men for what they did to her ancestors. Seeing the elder’s daughter had broken that taboo, she stole the scripture Takeru delivered, kidnapped every women in town, and turned them into monsters. Takeru is asked for help in getting the scripture back, which would allow them to turn the women back into humans. He isn’t eager to help, but eventually accepts and heads for the witch’s tower.

A traveling merchant, who makes Takeru go to Phoenix in his place. He uses the money Takeru owes him as a pretext, but actually has other motives to avoid going to the town. He later joins Takeru’s party to help him save the town’s women. Voiced by Banjo Ginga in the PC Engine version.

The third party member, a sorceress who conveniently appears in the village when Takeru and Baan need to find a magic user in order to continue investigating the tower. Voiced by Sumi Shimamoto in the PC Engine version.

The town elder’s daughter. She has fallen in love with Pierrot, a young man visiting the town, and both have promised to marry each other. Voiced by Aya Hisakawa in the PC Engine version.

He asks Takeru for help when the town women get turned into monsters. He’s been trying to find a way to defeat Mesaanya with no success. Voiced by Koji Yada in the PC Engine version.

A descendent of the Witches. When she first arrived at Phoenix she pretended to be a nice person so the town people would open up to her, but eventually revealed her true intentions and made most of the men run away from Phoenix. Voiced by Yumi Nakatani in the PC Engine version. 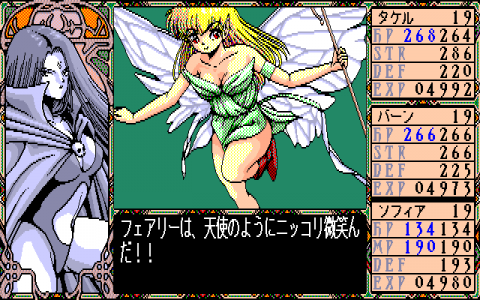 Most of the basic game mechanics remain the same in Dragon Knight II, the biggest change being the addition of other party members, making up a party of three, but battles still play out the same. The player is still only able to give out one command in each turn, with Takeru in charge of physical attacks and using items, Baan just automatically attacking every turn, and Sophia using the available magic spells. But using magic in battles is useless unless you’re in need of healing, so leaving the enter key pressed down while Takeru and Baan kill the enemy is the best strategy for almost every battle in the game.

The main objective this time around is to turn all the monster girls back into humans, so every enemy you find in the tower is one of those girls. This means battles only have one enemy at a time, opposed to the multiple enemies in the first game. The player needs to find pages of the scripture inside the tower, and each page allows turning a specific monster back into human again, otherwise they’ll just run away (but still give exp and money) when you beat them in battles. There are also no bosses except for the final one, which makes for an easier game all around.

Despite all this, it still feels like a big improvement over the first game, mainly thanks to the more lively script and better developed characters. The interactions between Takeru, Baan and Sophia make exploring the floors all the more entertaining, and each and every NPC also has a lot more personality and lines than the ones in the prequel. There’s also a lot more attention paid to the actual plot, which, while still pretty simple, manages to include some surprising moments. It’s clear from the get-go that Dragon Knight wasn’t initially planned as a series, and the world and backstory to the dragon knights wasn’t very developed at first. The sequel addresses some of that, and even leaves some plot threads open for the third game.

Visually, it’s at the same level as the first game, although battles now feature large CG art for the enemies instead of small sprites. Astonishingly each monster girl has her own unique battle theme – all thirty of them. Most aren’t very good tracks, but it’s an impressive effort nonetheless. 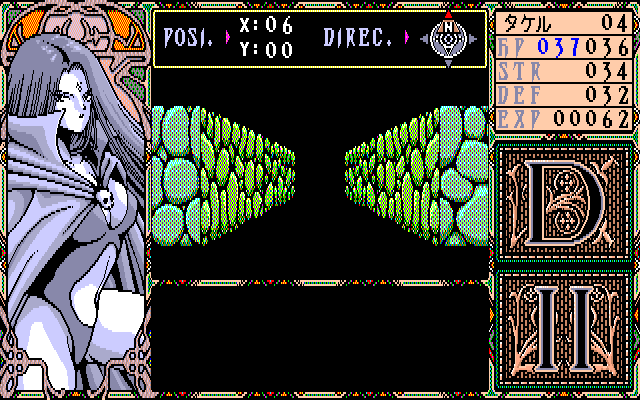 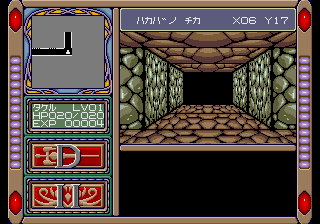 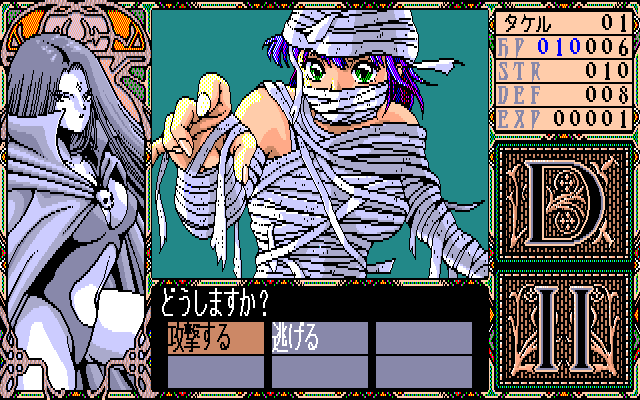 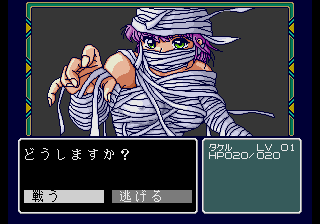 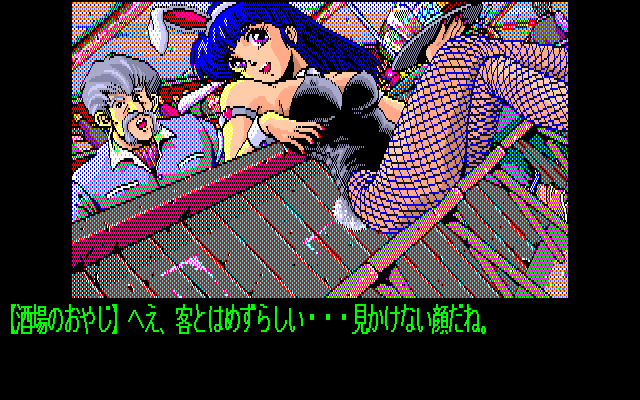 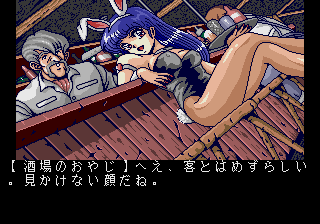