Sting’s Riviera: The Promised Land technically falls underneath the “RPG” banner, although it’s really more a visual novel with occasional fights interspersed. Drawing loosely upon Norse mythology, the story begins a thousand years prior, and recounts the tale of Ragnarok, also known as the battle between heaven and hell. The good guys won and turned the evil land of Utgard into a paradise, renaming it Riviera in the process. The years go by, and while Riviera continues to prosper, the council Magi believe it’s contaminated and will unleash more chaos on the world. Two Grim Angels, Ein and Ledah, set off to destroy Riviera and rid the world of this perceived danger, but they don’t quite succeed – Ein is knocked out in battle and awakens within Riviera, which happens to populated by various fairies, sprites…and lots and lots of girls. Although Ein has lost his memory, he still vows to protect the land and its inhabitants, while fighting against his misguided former partner, who still seeks to destroy the land.

The hero of the story. Ein sacrificed his wings to obtain his Diviner sword, the Einherjar. His name is Echthel in the Japanese version.

Rose is a flying cat who acts as Ein’s familiar. Although she gets lost when Ein first enters Riviera, the faithful feline eventually tracks down her master. She’s a bit sarcastic, and obviously modeled after Nall/Ruby from the Lunar games.

Ein’s partner is much stronger than him and continues his mission to destroy Riviera, effectively becoming a major villain. Even though he’s cold and ruthless, he’s not truly evil.

Fia is the most soft spoken and shy of Ein’s companions. Keeping with that stereotype, she’s an excellent healer, and can wield a rapier quite well.

Lina is Fia’s roommate, and her energetic demeanor balances out her partner’s quietness. She’s essentially the little sister-type girl, who also has a tendency to blurt out innuendos. She’s best with a bow and arrow. Her Japanese name is Lyuri.

Serene is a bit of a tomboy, has dark black wings, and has a thing for cat ears. Her favorite weapons are scythes.

Witch girls are plenty awesome as it is, but red headed witch girls are even more superior. As you might guess, she’s quite the magician, although she’s also good with whips. 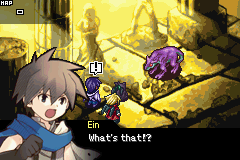 You never directly control your character’s movement in Riviera – rather, all exploration is menu-based, and you simply choose to move forward on to the next screen or backward on to the last, with occasional forks in the path. Almost every screen has your party members bantering back and forth – there’s a lot of dialogue in Riviera. 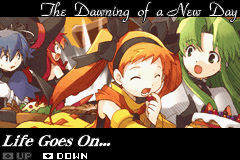 Once you get past the (overly long) first chapter, all of Ein’s future compatriots are female, which allows for all kinds of romantic hijinx. Similar to Sega’s Sakura Taisen series, there are vague dating sim elements, as each female has an affection ratings towards Ein, which will change depending on how you treat them. Most of the time this simply revolves around answering their questions correctly (just remember their names and don’t be a jerk) or letting them get the final hit in battle. The endings will change depending on what girl has the highest affection rating when you get to the finale. In keeping with this kind of game, there are also a few hidden bath scenes as treats for the fans. 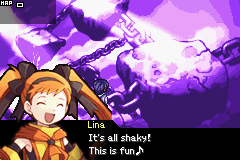 As you explore screen after nearly identical screen, you can stop to investigate little bits of scenery, which will occasionally grant you an item. Checking out the landscape usually requires a consumable resource called TP, which is restored based on how well you fight. You never know whether you’ll actually find anything of worth whenever you do this, so it’s a big aggravating that you’re limited in how often you can do it, although I suppose that’s an incentive to do well in battle. Sometimes you’ll need to do small minigames (tap the indicated directions in a certain period of time, or pound on the A button constantly) in order to disarm traps or recover from falls. 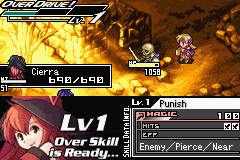 Every fight is predetermined, and the game is very polite in letting you choose how you want to approach it – you can run away if the enemies look too tough (although you can never avoid fights altogether) and you’re given the option to retry without penalty if you lose. Much like the exploration segments, Riviera takes a different approach to the standard combat system. You are only allowed to take four items in battle – these include weapons and healing items like potions. Furthermore, every piece of equipment has a limited number of uses – once that number hits zero, it’s gone for good. (Thankfully, the game is very generous making sure you’re well stocked, often to the point where your inventory is overflowing with stuff.) 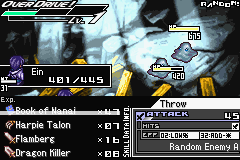 Once battle begins, you simply pick one of your four items and the chosen character uses it. Each of your party members has different affinities with different weapons, and repeated use is the only way to level up your characters and unlock special attacks. (If you want to level-up your characters without worrying about breaking your weapons, a training option is available which lets you relive past battles without worrying about consumables.) As you attack or take damage, the Rage bar at the top of the screen will begin to fill, which can then be spent on special attacks. However, the enemies have a similar gauge, and will be all too happy to call out its own damaging maneuvers when you’ve damaged them enough. 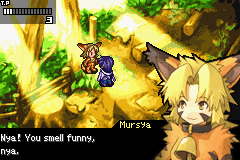 And herein lies one of Riviera‘s biggest faults – much like the 32-bit Final Fantasy games, Riviera is so in love with its attack animations that it doesn’t know when enough is enough. Fights often last way longer than they should, partially because enemies tend to have a lot of HP, partially because every character’s turn takes several seconds to play through. It doesn’t help that you can’t choose your targets, as they’re determined by character’s position and the type of weapon. 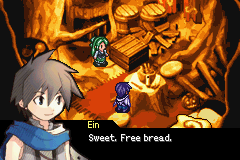 Because of all of this, Riviera feels somewhat constricting, as well as somewhat bloated and repetitive. But from a storytelling perspective, it’s a lot more involving than your average Japanese RPG, and it requires you to think a bit differently than compared to a more standard GBA RPG, like the squarely-by-the-books Golden Sun. It’s worth trying just for the music, which is generally fantastic. There are a large number of battle themes, all of which are excellent, and even the exploration music is pretty decent. The GBA version suffers from the same problem as a lot of games – that is, some instruments are digitized samples, while others are standard Game Boy PSG noises. Still, the melodies are catchy even on the WonderSwan version. 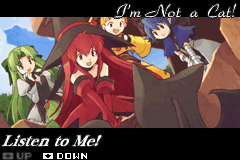 In fact, Riviera initially began life as a WonderSwan Color title in 2003, released by Bandai. Although most Westerners are unfamiliar with the system, it could display some pretty nice graphics, even though its sound capabilities were roughly on par with the original Game Boy.

The Game Boy Advance version was released in 2005 and translated into English by Atlus. This version featured slightly enhanced graphics, improved music, and voice clips during battle. Most of the artwork has been redrawn by illustrator Sunaho Tobe, and several new CG scenes were added. A new ending was added, some of the bugs were fixed, and general balance tweaks were applied.

Another version was released in 2006 for the PSP. The graphics have kinda sorta been improved – the portraits look fantastic, but the backgrounds and sprites have just been resized and filtered to accommodate for the extra screen space. The backgrounds generally look okay, but the characters look pretty bad. There are also even more new CG scenes. A new chapter was added for the North American release at the end of the game, although Sting later republished this version in Japan as a “Special Edition”, which also fixed up some of the loading time issues. 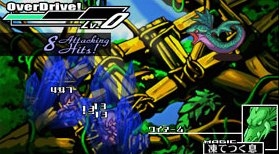 The biggest improvement comes in the audio department, as the dialogue is now fully voice acted (both Japanese and English voices are available in the American release) and the soundtrack has been fully rearranged using high quality synth. Oddly enough, both of the bath scenes were censored in the Japanese version, most likely due to the stricter limitations set down by CERO, the Japanese game ratings boards. These were reinstated in the American release. There are a few other changes too, like the removal of the suspend feature, and some of the bathing scenes require playing simple button mashing minigames. 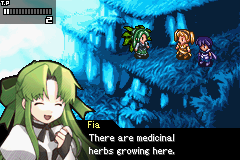 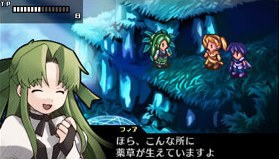 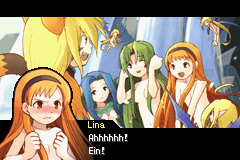 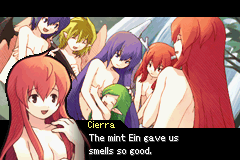