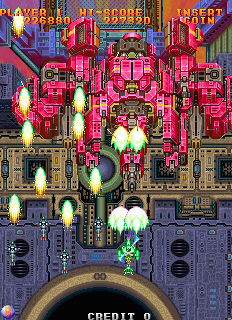 After the closure of Toaplan in 1994, much of the staff scattered in the winds, forming companies like Cave, Takumi, and Gazelle. However, a few members shacked up with Taito to create one more title, Gekirindan. In some ways, it was a homecoming, since Taito had published most of Toaplan’s shooters through the 1980s. While Taito had established its own in-house brand of shoot-em-ups with games like Darius and Rayforce, Gekirindan is very much in the style of a Toaplan game. The title is difficult to render into English – “gekirin” refers to the anger of a superior (like making your boss violently angry) that directly translates to “imperial wrath” or “wrath of the heavens”, while “dan” means bullets. The location test title was “Sol Breaker”.

The main villain is Giandigus (referred to in the awkwardly translated English text on the arcade flyer as “the Huge Boss”), who is attempting to destroy humanity by time-traveling to their past. Six brave heroes jump into their respective ships, including a futuristic-style fighter jet, a helicopter, and a biplane, and chase him through time before he can execute his devious plan. These ship types are all homages to the type of fighters seen all throughout Taito’s games, even though a helicopter or a biplane flying in outer space seems kinda ridiculous. 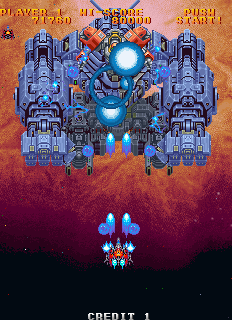 Of the three types of ships, each has two types of weapons, shot or laser, which can be switched between or powered up by grabbing icons. Also present are missiles of a few varieties, including standard, homing, and napalm missiles. There are the usual screen clearing bombs – the one dropped by the Type-A ship features a massive skull, an obvious Toaplan reference is there ever was one. One of the missile types on the Type-C also has miniature skulls on its explosions. There’s not much to the scoring system, beyond grabbing emblems on the ground.

Gekirindan runs on the Taito F3 board, and so has some nifty looking effects that weren’t present in Toaplan’s earlier games. The first stage features a cylindrical space colony, of the type seen in Gundam, which rotates beneath you. There are some nifty scaling effects like the type seen in Rayforce, another game using the same board; during a boss fight against a blimp, it will retreat to the surface, and your fighter will dive in after it. Another stage takes place above a massive chasm, and defeated enemies and other bits of destroyed machinery will fall into the pit after being destroyed. It’s similar to an area in Compile’s MUSHA for the Genesis (which was published by Toaplan in Japan) but with more impressive hardware. Though these effects look cool, they’re only present in certain parts of the game; during most of the game, Gekirindan looks somewhat average, especially compared to some of the awesome looking titles Toaplan put out like Tatsujin 2 and Batsugun. 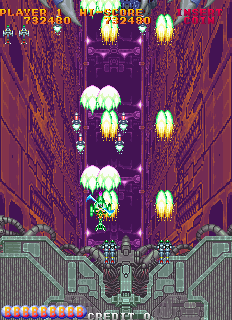 The levels don’t fully commit to the time travel concept, though – the second stage takes place in 1944 And the third in 1999, but the remaining three levels take place in various points in the future, and so it doesn’t really look or feel any different from the average shoot-em-up of the era. Giandigus/Huge Boss is makes regular appearances throughout the stages, being a cybernetic being who attaches himself to larger objects but manages to escape before being completely destroyed. Some of the pilot designs are also a little unusual, who come from various points throughout history. Hokuto Higara is typical blue haired shounen hero, Grother is a mysterious guy in a black leather jacket, and Shario is a woman who brings her cat along wherever she does. On the even wackier side of things, Anne Kutos is a girl looks like she stepped out of the early 20th century novel Anne of Green Gables, Dietza Savis is an Elvis impersonator, and the duo of Orsa & Mayoru look like pixies. Most of these don’t really fit with the sci-fi theme and instead feel like they came from a comical Psikyo title.

The soundtrack is outstanding though. Supplied by Taito’s inhouse band Zuntata, some of the stages’ tracks are based off a similar melody, giving a unifying theme throughout the game. The only unusual thing is that there’s no boss music – you might think you’re just fighting a midboss, until you defeat it and then enter a time tunnel to the next area, signifying the end of the stage. 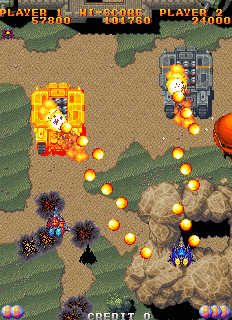 Some later Toaplan titles like Tatsujin 2 where known for their high difficulty level, and Batsugun was known for featuring prototypical bullet hell elements, Gekirindan is remarkably restrained – it feels more like the company’s output in the early 1990s. It’s also quite a bit easier, especially seeing as the ships on the 2P side are stronger. Your hitbox is also fairly large, though it’s not the bullets are dense enough that you really need to tightly weave through them.

Ultimately, Gekirindan feels rather quaint, especially compared to some of the more ambitious arcade shooters from Taito like Rayforce and Darius Gaiden, which were released just a few months earlier. It’s not particularly bad though, just rather average; it’s a good novice level shooter and it’s at least somewhat worthwhile for the soundtrack.

Gekirindan was ported to the Saturn in 1997, developed by Japan Media Programming and published by Virgin. Unfortunately it’s a rather bad port: the introduction and ending cinemas are videos for some reason (complete with ugly compression artifacts), it uses “wobble” scrolling so most of playing field isn’t visible on the screen until your ship moves upwards, the sound effect quality is bad, and the action pauses to load the boss fights. There’s quite a bit of micro-stuttering and it can’t replicate many of the cool visual effects – the rotating space colony in the first stage looks like a mess, and the massive chasm in the fourth stage is just a single background layer, completely removing the sense of depth. All of the music is redbook audio, so it doubles as a soundtrack CD, but it also means the music has to restart after the loading. It also can’t be bothered to save scores to the Saturn internal memory, but at least it supports tate display, which restores some of the missing visual effects. Considering how many other shooters got quality Saturn ports, this one stands as a disappointment. 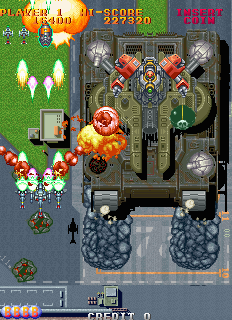 The game also popped up on the Taito Legends 2 compilation for the PlayStation 2 in 2005. This is straightforward emulation, though the quality is pretty decent, outside of the blurry, upscaled graphics. Like the other vertical shooters on the release, it does not support tate display. 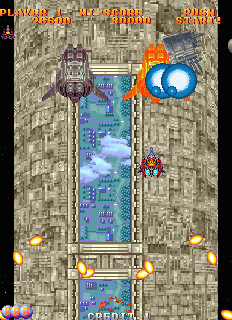