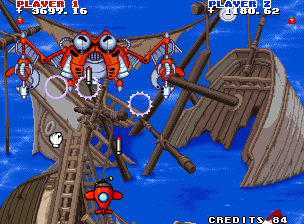 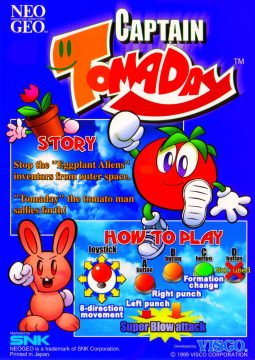 On a dark and stormy night, a mad botanist is doing a bit of research in his laboratory, when a tomato plant near some chemicals drops a tomato into a beaker. The beaker explodes, and out comes a tomato with a face and limbs that says “MUTATE!” The scientist, covered in soot and ash, gives the new tomato a tired expression, as if he feels he is getting too old for this stuff. The tomato then runs off to stop the forces of evil eggplant aliens, under the name Captain Tomaday!

The titular tomato in Visco’s Neo Geo shoot-em-up must traverse five levels that have baddies coming in all sorts of waves. However, what sets Captain Tomaday apart from most shooters is its method of attacking. The A button makes Tomaday’s left fist shoot, and the B button fires his right fist. Both fists can be fired simultaneously or one at a time. Attacking with one fist for a while makes the other grow in size and power, eventually turning Tomaday’s other first into a 1-ton weight which does more damage than the usual fist. Tomaday’s fists return to him as soon as they hit something, and this creates a risk vs. reward factor in taking risks and getting close to an enemy to take them out quicker versus taking them out from a distance even if it will take longer. 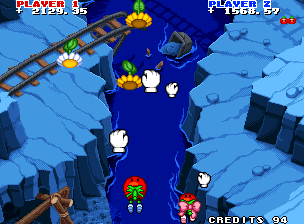 Throughout the level, tomato cans will fall from the top of the screen. If Tomaday hits one of these, it turns into either a gem or token for points, or a power-up in the form of a capsule pill. The player also drops a pill when he dies. If the image of Tomaday and cartoony art style does not already bring up thoughts of TwinBee, the fact that these power-ups can be juggled by hitting them probably should. However, unlike TwinBee, juggling them has no effect on their power or value, so it feels a bit pointless.

The power-ups allow Captain Tomaday to take 16 total different forms, and some are better than others. The first two make the hero Tiny and then a Giant, without changing the attack mode. Every further pill taken with the current form turns him into some other creature with an unique attack. The Chameleon has a tongue that extends across the entire screen and hurts anything that touches it. It is followed by the Monkey, who has a diagonal double banana shot, and the plant with a three-way spread.

When Giant Tomaday gets hit, he is turned into a baby, who has a projectile attack, but is harder to maneuver and is still large. Both the Plant or Baby turn into Winged Tomaday with another pill, which can transform into Kendama Tomaday, who has a ball that goes forth and retracts after a short distance. It is one of the worst forms, but can turn into the Carrot, with four arms that punch out in a spread form. The Carrot can turn into a Bunny (makes sense?), which works the same as normal Tomaday, but with carrots instead of fists. 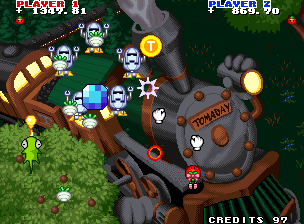 Next is the Fish, which is almost as bad as Kendama. If the Fish gets hit, it turns into the crab, who has diagonal shots, and can also shoot scissors. Fish or Crab can become Airplane Tomaday, which in turn can become Cat Tomaday, both of which function mostly the same as the normal form, except with different graphics. The Devil/Angel (the form depends on whether you’re player one or two) shoots flashing spears, but reverts back to normal Tomaday when it gets another pill.

Occasionally in single-player mode, two tomatoes will come out of a tomato can, and if Tomaday collects one of these, he duplicates himself and can deal twice the damage. When there are two Tomadays, their formation can be changed with the C button between being aligned horizontally and vertically. In co-op mode, this power-up is unavailable and the second player is Captain Tomaday with a pink bow and higher voice, again creating some similarity between TwinBee and WinBee.

The game goes through five levels, and while it’s fairly challenging, there are certainly many more difficult shooters. Between certain levels, a cinematic plays showing Tomaday fighting or running from something. The graphics themselves are very cartoony and vivid, and the cinematics have a nice thick outline style that really complements. The music consists of general superhero-style brass and percussion. The voice samples are actually quite clear as well. 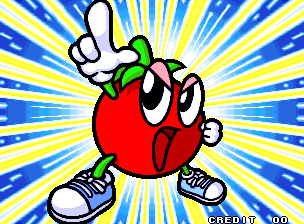 But overall, the game has a lighthearted nature and nice pace that makes it a good change of pace from the era of Cave and Raizing with “How many bullets can we fill the screen with?” that were beginning to become popular in the late 90s. Fans of TwinBee and Parodius might find the game fairly derivative, though, and it’s never as good as any of Konami’s efforts. It is at least worth playing for the interesting final boss, and the Engrish ending credits that come after.