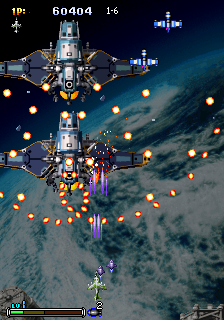 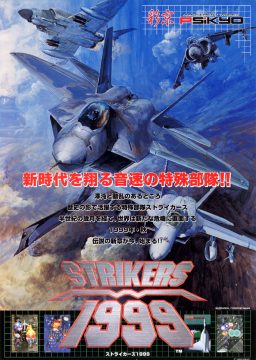 Strikers 1945 III, also called Strikers 1999, is a dramatic change from the last two games, ditching the World War II feel for a modern war setting. Giant robots and super science are still all around, but it doesn’t look as out of place in 1999, giving the game a look similar to Raiden Fighters or Air Gallet more than anything.

Like the previous games, there are 8 levels in total and a second loop. They’re mostly pretty standard for shooters, including a desert, a battleship level, a sea of clouds, and other normal levels. Things get weird in level 6 and 7, where you have fighter jets in space and going at warp speed. The last level is a disappointingly standard enemy base.

None of the planes from the previous games are selectable in the third Strikers game, even though there are some clear shout outs to some of the originals. Options return, but each jet has a set number of them that follow it around, simply growing in power and not numbers as you power up. 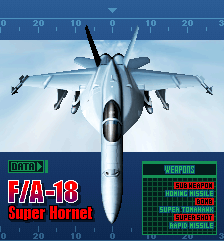 Super Hornet is the modern equivalent of Lightning, having four options always following it, shooting powerful homing missiles, and a bomb that involves looping. The fact that it has the word super in its name may not be a coincidence, due to Lightning’s similarities to Super Ace. 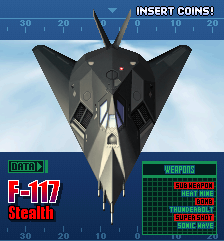 Stealth is a very interesting fighter, even though it lacks any stealth capabilities. Its sub shot shoots slow moving grenades that do heavy damage. Its charge shot unleashes its powerful options, which flare up with energy and wreck anything in their way. Its bomb has to be its strangest attack, doing a loop and making electric spears rain from the sky. There is nothing subtle or stealthy about it. 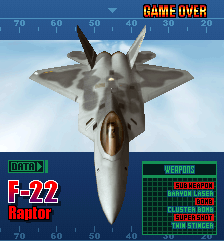 The Raptor has the best sub shot in the game, something reminiscent of the Wind Laser, the most powerful weapon in Konami’s Axelay. Its charge shot is less impressive, shooting surprisingly weak lasers. Its bomb is pretty cool, dropping a large shell that explodes into a cluster of bombs. 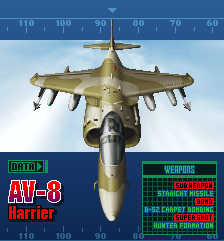 The Harrier is the powerhouse of the bunch, and clearly the spiritual successor of The Mosquito. It shoots destructive missiles, even bigger missiles for a charge shot, and burns the place up with even more incendiary missiles with its bomb. 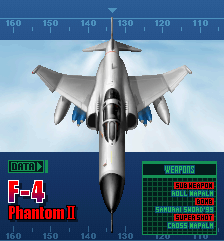 The Phantom II is the spiritual successor of Shinden. From having the same bomb, to the same charge shot, it plays almost exactly like that ship from the first game. It is pretty cool how its modern counterpart is so much like the original.

The story involves Earth being attacked by the same aliens as always. They apparently evolved from crabs into insects in the 54 year time gap between this game and the last ones. With the aliens stronger than ever, the Strikers team up with FGR in hopes of defeating the aliens for good. Luckily, technology has evolved over time as well, switching planes for jets and far more powerful weapons.

There are two new scoring tricks in this entry. All bosses have an extra powerful super attack. Whenever a boss uses a super attack, a blue orb is shown, which is its weak spot. Shooting the blue orb not only does extra damage, but it awards bonus points. It’s a pretty cool feature and very well implemented. The other replaces the gold bars for medals and introduces medal chaining. Picking up a medal while it is spinning starts the chain by giving you 2000 points, and continued by adding 2200 points. Chains are broken when you die or collect a medal worth below 2000 points.

Strikers 1945 III offers the most power both with and against the player, making the action far more intense. It’s not as hard as some of Psikyo’s other shooters, but is still noticeably harder than the first two, especially when it stops pulling its punches near the end of level 2 and fires full on bullet curtains in all directions. It all makes the last two games look tame in comparison.

Strikers 1945 III never left arcades and was never ported to any home consoles, which is a little bit strange after seeing how readily accessible the first two were. It never even got ported in a museum collection the way the first two did. That’s a shame, because it’s definitely the best in the series.