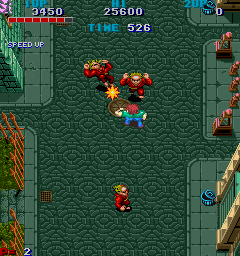 Capcom’s Final Fight is one of the seminal entries in the beat-em-up genre, which refined the work done by Technos with Double Dragon, and spawned countless clones. However, it actually wasn’t their first attempt at this type of game, with their 1987 title Avengers predating it by two years. (It doesn’t have anything to do with the 1960s television shown, nor the Marvel superhero comics. The title screen also calls itself “Avengers” while flyers and other ads refer to it as “Avenger“.) It came at a weird time when developers were still experimenting with the “walk forward and smash dudes” genre, with this one actually feeling more inspired by Irem’s Kung Fu Master than Double Dragon. It also takes a note from Capcom’s earlier Commando in that it’s viewed from an overhead perspective, but (mostly) removes guns and projectile weapons in favor of melee combat. 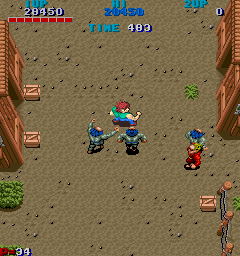 The game takes place in Paradise City, whose peacefulness has been ruined by the evil Geshita and his gang. They’ve kidnapped not the hero’s girlfriend, but six women from city, who must be rescued by the heroes, Ryu and Kou. There’s actually a unique portrait for each of the hostages (though none of them are named). The game begins in the street of the city, moves to the Chinatown district, then goes through various outdoor settings (a canyon, a jungle) before moving to the castle-like headquarters of Geshita. The game was directed by Takashi Nishiyama, who later on to create Street Fighter, though at this time was known at Capcom for games like Trojan, which has a similar thematic level progression.

As far as attacks, your hero can jump and kick, and can also perform a whirlwind kick by pressing both buttons at the same time, being a slow but useful crowd control technique. Since this game predates the standard of these kinds of moves draining your health, so you can use them as many as you want. Bonus items can be found in trash cans, statutes, and other similar items, which can increase your power or your speed. Many levels also have doors you can open (or break down), leading to short bonus stages. In most cases, you just need to beat all of the enemies in the room, but a few are more innovative (and weird), like one where you need to play whack-a-mole with enemies hiding beneath floorboards. Beating these levels will usually give additional weapons, like grenades, throwing knives, and nunchucks. These are either in limited quantity, or can only be used for a short amount of time. Though you resurrect at the same spot that you died, continuing sends you back to an earlier checkpoint. 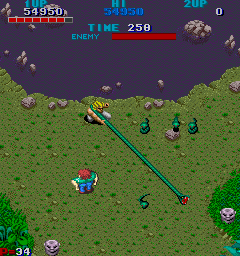 Most of the standard enemies attack like the dudes in Kung Fu Master, where they’ll lunge towards you, grab you, and keep you in a hold until you break out. Other enemies run forward and toss explosives, or leap out of the scenery to toss daggers at you. There’s no real need to stop and beat up enemies, so you can just charge forward until you reach the end of stage, where it stops and floods the screens with mooks. Beat them all and you’ll be led to the stage boss fight, most of which require some kind of trick to beat them. In these cases where you can’t just run up and pummel them, you usually need to lure them out somehow and then attack as they back away, slowly chipping away until they run out of health. The wildest of these bosses is a guy who swims in the lake and attacks by slinging a gigantic snake like a whip. Otherwise they’re pretty standard gang brawler enemies.

Avengers isn’t particularly well known among Capcom games, mostly because it’s not really all that great. This is because this type of overhead brawler just doesn’t really work – a few other companies tried with similar games around the same time, like ADK’s Kyros and SNK’s Ikari III, and they’re not particularly good either. The perspective just isn’t all that favorable for games that favor melee attacks, especially when you have to face off against enemies that have longer range than you do. Even the graphic designers seemed to have a hard time getting it to look right, because the characters have strange proportions, with hulking shoulders and lanky limbs. (Though Konami’s Gaiapolis actually tweaked enough aspects to get it right, though that title is from the early 90s.) Other aspects are strange too, particularly the sound: the music is decent, but in spite of some cool digitized effects, the standard “dude pummeling” noise is more like an early 80s arcade laser effect than the expected *thwack* sound, which was a recurring issue among Capcom arcade games at the time. Altogether, it just looks and feels kind of strange, but otherwise doesn’t really have the kind of charm that would otherwise elevate this kind of offbeat game. 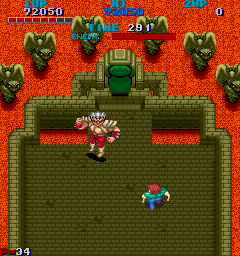 In Japan the game is known as Hissatsu Buraiken (“Deathblow Ruffian Fist”). Though it could be a coincidence, it’s believed that Dan’s (from Street Fighter Alpha) special move Hisshou Buraiken is a reference to this game.

Avengers was not ported at the time of its release, and only shows up on consoles on assorted compilations, including the Capcom Classics Collection (PS2/XB/PSP) and Capcom Arcade Cabinet (PS3/XB360), the latter having some extra options as part of a “Casual” mode to make the game easier..