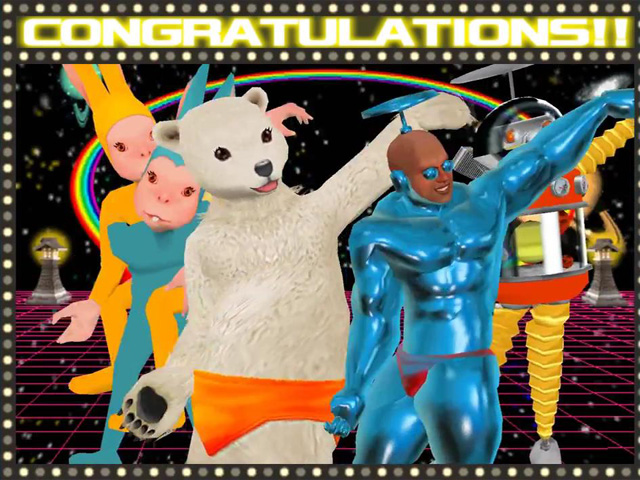 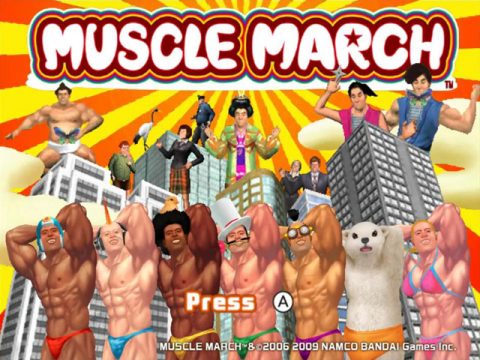 In Muscle March you chase after a thief that’s stolen from you. Simple enough, right? Well, the thief in question is able to burst through walls with ease, leaving a cartoonish cutout in his wake, which you have to fit through Hole in the Wall style. Mess up too many times and you’re out. Not much in terms of depth, but that’s due to the arcade origins.

What makes Muscle March stand out like a peacock raving on the moon is the theme. You choose from a selection of outrageous super-buff bodybuilders from various nationalities (plus one stronk woman. And a polar bear in a speedo) as you race in line with your brethren to catch whatever manly wacky thief just took off with your big weight-gaining protein powder in an attempt to man pile on them to halt their getaway. In order to reach the dastardly scoundrel, you have to flex in the correct position out of four poses with the Wiimote and Nunchuck to fit through the cutout holes the burly assailant makes before a final mad dash. With all the beefcake on display, coupled with the random locales, insane speedy J-pop soundtrack, and knowledge of Japanese stereotypes, it’s hard not to see this game as a over-the-top humorously insensitive joke project. It feels as though if an American company developed a similar title with the same veneer – say, a group of effeminate dandys mincing and prancing about with showtunes blaring – many game journalists would have a field day making it a paraiah. But, you know, those zany Japanese, right? 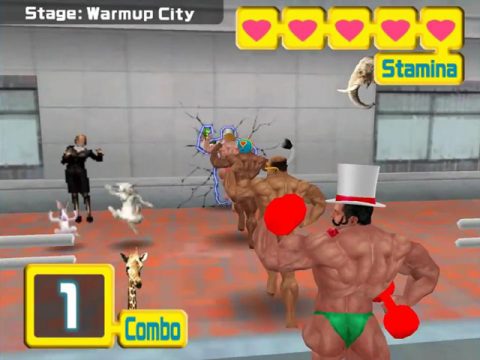 All kidding aside, this game lacks beef. There’s no difference in the character you choose other than whatever goofy look you wish to go with. There’s only 9 short stages in total with one endless rainbow track, which you can blow through in less than 30 minutes. The waggle controls offer a bit of a delay, leading to frustration as the levels speed up and the thief starts faking its next pose out, leading to a series of painful mistakes despite only the 4 allowed inputs. It’s not much of a looker, either. Even for its original 2006 inception, it lacks any detail beyond a budget Dreamcast release, even using low textured cardboard people and animals on the sidelines as you barrel through buildings and street signs or even jungle scenery. Its cheap production almost becomes charming amidst the shallow gameplay.

Essentially Muscle March is a very homoerotic Simon Says. Surprisingly, it made its way to North America and Europe at a reduced cost from Japan, so you can break it out once in a blue moon to confuse your friends with when Katamari Damacy becomes tame.