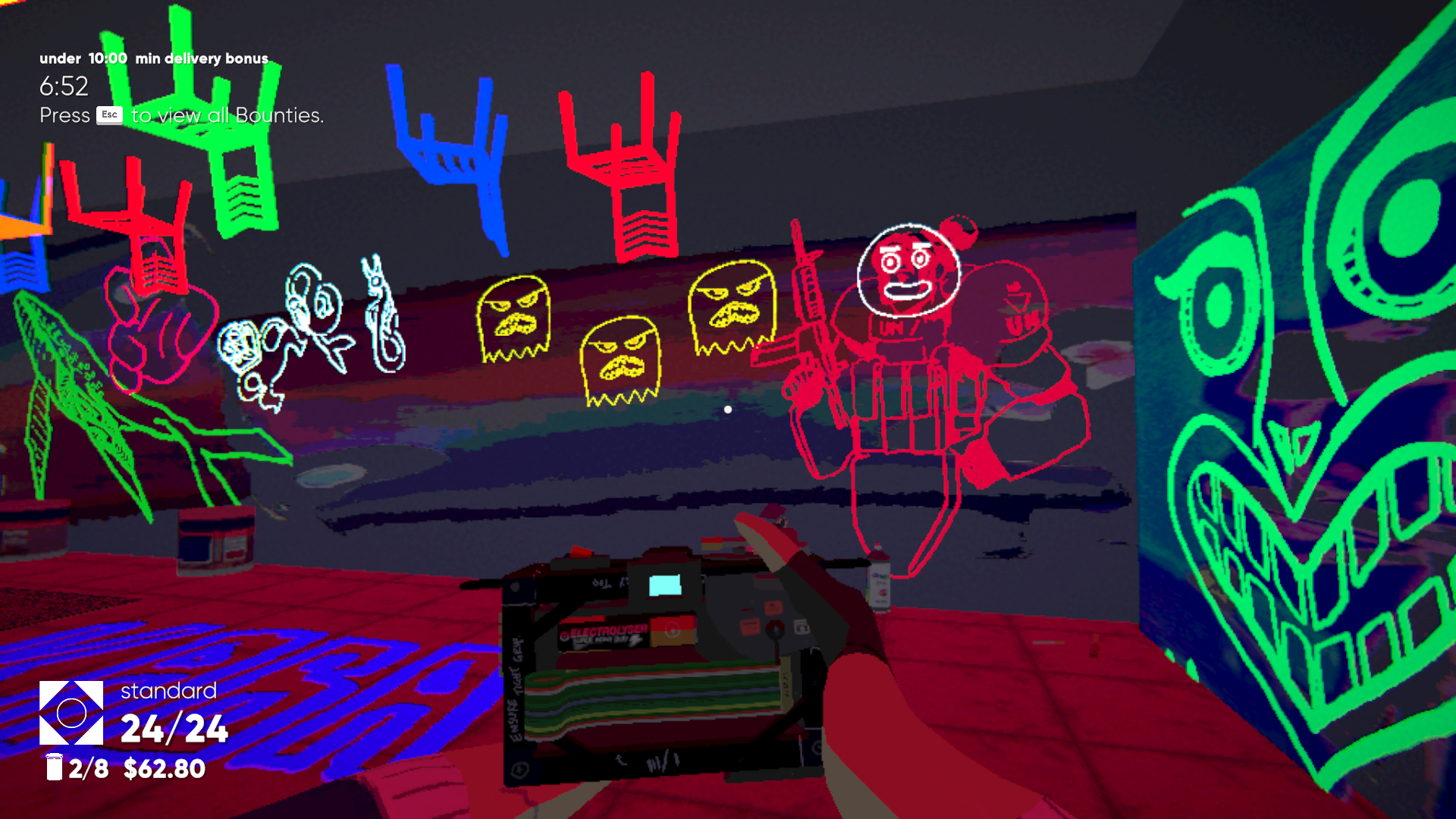 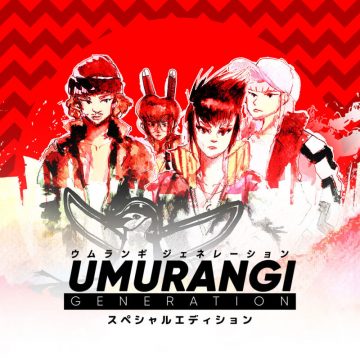 If you’ve heard of Umurangi Generation, it’s probably because of game critics calling it one of the most important games of the time, an angry, spiteful game pissed about the state of the world. Made by one Tali Faulkner, a Maori developer, the game is a photography sim where you go about a stage and take some requested shots on your bounty list, do some secondary objectives (each main and secondary objective unlocking new camera parts), and just mess around and take picture of whatever for the heck of it. You can walk, you can jump, and you can fiddle with your camera. 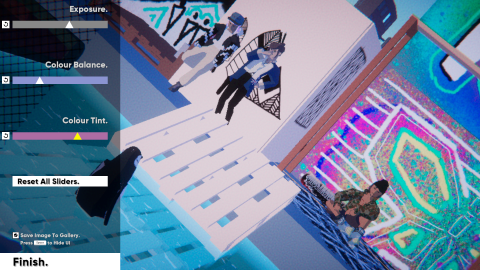 This is all set on the verge of the end of the world, as you can pick up on from little environmental details. The game is a master class in environmental storytelling, not having a word of spoken dialog outside the tutorial presentation, letting graffiti, ads, movie posters, newspaper headlines, and more tell you everything just from paying attention to the world around you. That doesn’t even get into the stand out details like the second stage taking place at a UN military outpost and how unexpectedly relaxed the atmosphere is. It also notably looks and plays kind of like trash – in a good way, of course. It’s a mess of samples and weird sounds mashed up into tunes and rhythms, messy but also undeniably enjoyable. It fits this game perfectly, a game with messed up collision that locks you on the edges of objects when you don’t make a good jump and with models made of milk cartons. This is all by purposeful intent, mind you. 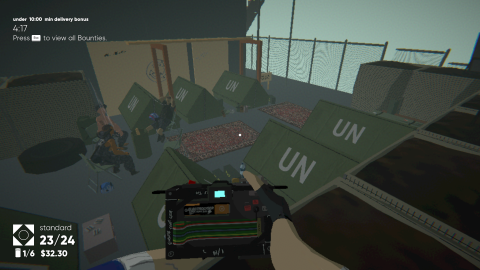 Umurangi Generation is a game about art and expression. The scoring system the game employs is ultimately arbitrary, whether the game thinks a photo is good or bad is completely random, so reaching a certain level of money earned in the secondary objectives comes down to just taking a bunch of pictures. It’s a sort of freeing thing to realize, that you can just shoot whatever and mess with the settings however you want. Make it an artsy black and white, turn up the saturation to make some graffiti pop, over expose something for shits and giggles, do whatever. See that cat? Capture it with a fish eye lens, fish eye lens everything, who’s gonna complain? You can even play with spray paint and hover boots in the DLC (which is a must to fully experience the game). 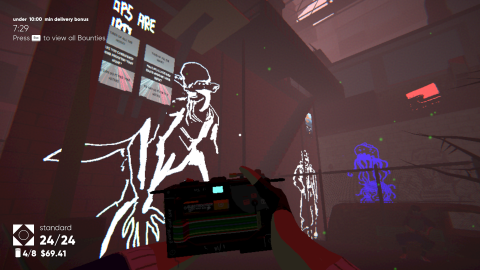 It’s all about making cool shit, even having the option whenever you close the game to share your art on social media, which doubles as a brilliant marketing strategy. The youngins’ you meet in the game have a similar focus and attitude, often seen having dance parties in the street, hanging out in the graffiti hall, chillin’ on the rooftop with your penguin buddy, that sort of thing. At the same time, you keep finding graffiti that expresses anguish, frustration, and straight up anger at the powers that be, the inept UN, the feeling of helplessness of being unable to do anything, an almost reverent fear of what’s coming towards them.

If there’s one developer that can be cited possible influence on this, it would be SUDA 51. There’s a few stylish flourishes here clearly borrowed (including that old semi-spooky Mac text to speech effect on the title screen), but there’s some overlap in how they express their anti-authoritarian politics. Suda isn’t the sort of guy to make games about people’s revolutions or organized action, but rather personal expression as an act of rebellion in a broken and dehumanizing system (see The 25th Ward in particular). While one could read Umurangi as a nihilistic story (though there definitely is a streak of that in there), it doesn’t feel defeatist or self-centered either, not unlike Suda’s work. These sorts of games can be grim, but they do explore a sort of uneasy truth that, no matter how bad things get, there are little victories to claim for ourselves. 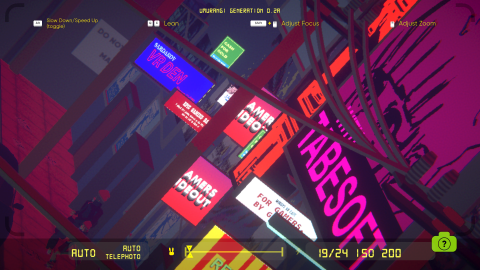 Umurangi Generation is very blatantly about how inept the Neoliberal ideology that runs the world is unfit for actually helping people or solving problems, Faulkner citing the Australian wild fires and response to COVID worldwide as major inspirations for this game. It’s about the last generation of humanity watching the world as they knew it come to an end. Seeing it solely as a parable about climate change and empowering the wealthy, however, ignores the part that Faulkner is part of a first people’s tribe. His people have experienced the end of the world as they knew it already, living in a post apocalypse brought by colonizers, their language slowly dying and their old ways replaced with modernization – in Faulkner’s case, with internet subcultures and urban aesthetics. It’s how he found a way to express himself with art. 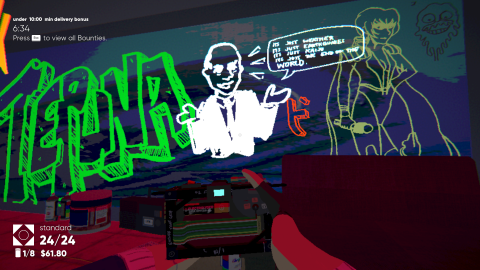 Umurangi Generation has so much to read into, but it’s also so easy to appreciate on the surface level. Like it’s other shitty future Japanophile siblings, Broken Reality and Paradise Killer, there’s a lot to read in there, but the aesthetics can be vibed with on their own isolated. The unique photography mechanics makes it more then just a narrative experience, though, but something to be toyed with for a long time still. The game is both a tool of expression and an expression of frustration in and of itself, and what it has to say is just as important as what it lets you say with it.