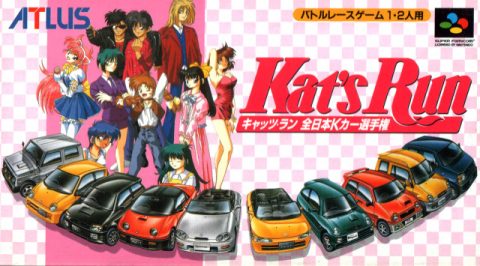 Anybody familiar with racing games in the early to mid 90s can tell you just energetic and creative the scene was. OutRun stylish vistas and carefree atmosphere presaged these trends about a decade earlier, and similarly iconic names were soon to follow. F-Zero‘s imaginative sci-fi tracks both attracted early adopters to the Super Nintendo and laid the groundwork for even more exhilarating tracks in future installments. Virtua Racing and Ridge Racer excited players with an early look into the promising world of 3D gaming. Super Mario Kart launched the kart racing genre practically overnight.

How did Kat’s Run: Zen-Nippon K Car Senshuken distinguish itself from such an illustrious pack? Not that well, unfortunately. The truth is that Atlus’ late entry into the racing genre feels like an awkward amalgamation of a lot of these trends: a little bit of arcade racer here, some kart racer there, and a unique way of moving around tracks added in for good measure. On their own, these individual elements might make for a compelling game. In fact, a talented team of developers might have been able to balance them such that their strengths played off each other. But that’s not what’s happened here. Without any guidance or direction to make that vision a reality, Kat’s Run doesn’t make as much sense as you’d think it would.

And like many games that fall short of reaching their potential, one of the most disheartening things about playing Kat’s Run is seeing shades of what it could have been. Every track in the game is linked together into a single continuous course, but the connections between those tracks don’t immediately make sense. Deserts transition into tundra; sprawling mountainous caves transition into the Japanese countryside with nary a mountain in sight; a relaxed city transitions into a dystopian hellhole in a matter of seconds. Any connective tissue between these disparate landscapes is obscured behind a red ball that sends you down a pitch black tunnel. (At this point, it’s worth mentioning that the red ball connecting the tracks can function in one of two ways, depending on which mode you choose. It can either connect all the tracks in a straight line or serve as a fork in the road, letting you choose which areas you traverse. The only difference these modes is how quickly a single play session lasts; the fundamental nature of play remains unchanged.)

From these descriptions, it’s clear that Kat’s Run does away with any cohesive internal reality and instead links tracks together on aesthetic appeal alone. This lends each race a sort of abstract, magical charm. It feels like a journey across the globe, one that’s bound by neither space nor time but the limits of one’s own imagination. Or maybe it exists to lend an implied narrative arc to the game’s events, one where all the dramatic highs and lows of an entire racing tournament are condensed into a single event. Whatever the case may be, this imaginative take on track layouts would have been enough to set the game apart from its peers.

There’s an unfortunate irony to this situation, though: for as much imagination as the track layouts have, no other part of the game can capture even a fraction of that magic. Remove the track changing mechanic from Kat’s Run, and you end up with a dull racing game based entirely around skillful execution. You don’t even have to play that far into the game to realize this, as it’s immediately apparent at the start of each race. Although races begin with all the cars clamoring toward the front of the pack, this action lacks the hectic, high tension energy that, say, a Mario Kart would have. In fact, it can never acquire that energy. Because every car is equally capable of performing the same maneuvers (same top speeds, same handling, same acceleration) and because their makes and models aren’t easily identifiable, it’s hard to read much personality into these early bouts. The physics don’t help much. Despite the narrow roads constantly forcing you into contact with other cars, the ensuing collisions feel weak and without physicality. Thus each race begins not with playful and exciting rush to the front, but a clumsy, violent mess until everybody settles into place.

Emerging at the front of the pack, though, poses a new problem, and it’s one that racing games in general struggle with: what’s left for you to do? The surprising ease of maintaining a lead (under most conditions) eliminates any sense of competition out in first place, so the game devolves into a series of basic driving challenges. Turn this corner, navigate that sharp curve, etc. One could say that driving through these scenic vistas is enjoyable in its own right, and while that’s a legitimate answer, it’s not one that’s in line with what Kat’s Run is trying to be. Judging the game according to its genre tells you that it’s trying to be an arcade-style racing game. Judging the game according to its framing narrative tells you that it’s trying to evoke a cops-and-robbers atmosphere where each race is a desperate attempt to escape the police. Unfortunately, Kat’s Run doesn’t lay a strong enough foundation for either of these approaches to prosper.

This isn’t to say that the game never comes close. In fact, one moment toward the end of the game is proof to the contrary. As easy as it is to maintain a lead through the preceding tracks, a mystery racer will always come out of nowhere to challenge your authority. They’re tough, and they will overtake you. The only hope you have of reasserting your dominance is if you take every turn perfectly and conserve as much of your momentum as possible, which is no easy feat. If Atlus’ goal was to add tension to the game’s final moments, then they’ve succeeded with flying colors. Yet when compared to what transpired before this climax, it also underscores how empty and boring those moments were.

This isn’t even getting into the Mario Kart-esque items you’re allowed to use. Their inclusion feels weird, as Atlus doesn’t seem to understand why battle items work in the first place. The reason they work so well in Mario Kart is because the ever-present social context the games cultivate lends the items meaning beyond their immediate function. They could elicit joy as you frustrate your friends with a well fired green shell, or leave you cursing the CPU for using that lightning bolt when you were just inches away from the finish line.

Kat’s Run, being an individualistic racing game, can’t utilize those same opportunities. Even discounting some of the earlier problems, both the lack of memorable personalities among the characters and the fact of their cars obscuring their presence introduce significant roadblocks between the game and anything like a social context. This is on top of more structural problems like finding items littered across the track without any real planning (it’s not uncommon to find them off the side of the road or somewhere you can’t access), the absence of any consistent themes tying them all together (there are bombs and spike traps, but also high heels and teddy bears), and the fact that most of them function the same (you throw them at somebody who’s ahead of you). Taken all together, it leaves the impression that battle items were included more as an afterthought than as a meaningful addition to the game.

Kat’s Run didn’t receive favorable reviews when it first launched. In fact, the game got an 18/40 from Famitsu, and it’s easy to understand why. Now it wouldn’t be fair to say that in creating Kat’s Run, Atlus was blindly following whatever trends were popular at the time. However, it would be fair to say they didn’t fully understand some of those trends or how to make them relevant to this project. Kat’s Run would have ended up a better experience had it ditched the extraneous racing/item motifs and embraced on its potential as an OutRun-esque driving game. Or maybe it could’ve continued pursuing its goal of being a racing game and work toward making those extraneous elements more relevant to its own project. Anything would have suited Kat’s Run better than the middle-of-the-road approach the developers ended up taking. Such an approach only resulted in a predictably middling game.