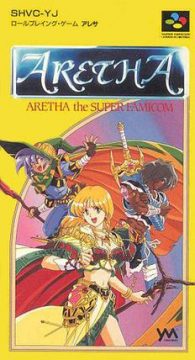 Due to the success of the Game Boy games, Yanoman was riding the wave of success with their Aretha series, so they decided to expand their horizon. Aretha the SUPER FAMICOM showcased as the first entry into the 16-bit era with a luscious makeover and a brand new female protagonist named Ariel. Released in November of 1993 in Japan, the same year as the third Game Boy title of the series, the Super Famicom version of the game made the console’s top-ten bestseller list in early 1994.

The game takes place approximately 100 years after the heroic exploits of Materia Weathers. The evil Howard is a distant memory, though his infamous deeds are still mentioned. The story begins with Ariel’s 10th birthday. She is is living with her grandmother, Seara, in the middle of Fosett forest. As a birthday present, Seara gives Ariel one of the three legendary rings from Materia’s time. She then tasks Ariel with running an errand at a nearby town. 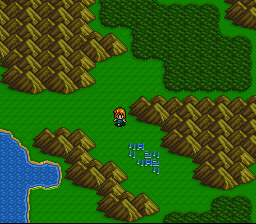 On the way back, Ariel runs into trouble when dwarves steal her items. She follows them back to their dwelling and discover their plight. As a result, she helps the dwarves and in return, they reward her with her belongings and a dragon egg, which soon hatches shortly thereafter. The dragon hatchling is named Fang.

Fast forward seven years later, Ariel is 17 and Fang is 7. Ariel soon meets an old man who traps her and Fang into a cave and leaves them to die. Doll, the magician from the previous trilogy who miraculously hasn’t aged at all, appears and rescues Ariel. Together, they return to Ariel’s home to learn that her grandmother, Seara, has mysteriously disappeared. They soon learn about the Vantar Empire’s plan to take over the Kingdom of Aretha, and embark on a journey to stop their evil plans. 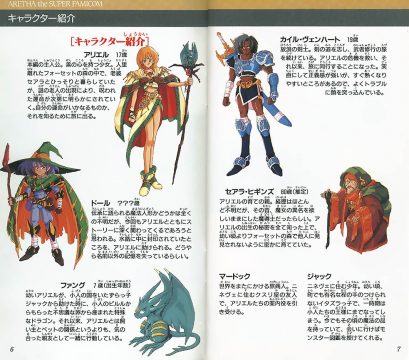 The gameplay remains largely the same as the previous games. Players traverse a map with random encounters. Battles still take place in first person like Dragon Quest, however, Aretha: The Super Famicom presents a new gimmick into the mix. The enemies can now appear in front, left, right, or behind. Technically, all enemies appear in front of you, but the player cycles through the direction by pressing L or R on the controller. The developers must have been attempting to introduce more strategy and depth into the battles, but only succeeded in increasing the tedium and prolonging the battles. Therefore, it is essential for players to acquire magic that hits all enemies in all directions, rather than killing them off one by one.

Acquiring magic becomes quite a chore in this game. Unlike other typical RPGs, you do not gain spells by purchasing them or leveling up. You must repeatedly use a certain spell to learn new ones. Also, only Ariel and Doll can learn spells in this manner. The other characters have a preset list of spells and abilities that do not change.

Visually, the game looks beautiful. The game has the basic sprites and animation of the typical Super Famicom RPG at the time, but the environments and characters look colorful and lively. The character illustrations pop up during the dialogue scenes, complete with eyes and mouth animation. The monster designs are unique and charming, as though the designer wanted to create a brand of originality.

Don’t expect much from the music, though. The musical compositions do not approach the works of Nobuo Uematsu or Matsuya Hidenori in terms of quality. The tracks are bland, blend into the background, and are easily forgettable.

A type of crafting, known as “mixed form,” appears in this game. Basically, you mix three items together, and they become a singular item as a result. While Mixed Form is useful in this game, it can also unbalance the gameplay drastically, because you can create powerful items early on to give your party an unfair edge.

Several items from the previous entries return such as the “Testament,” which levels the character up to level 99. There is also an item that is called the “Trinea,” named after another Super Famicom game published by Yanoman. The Trinea recovers all HP and MP and can be used infinite times.

The 16-bit installment offers some extra tidbits, such as a bestiary and an Aretha CD, which allows the player to listen to the various sound effects and music of the game.

An average playthrough can last between 60 to 70 hours. However, much of this time is spent grinding or reading through pages upon pages of filler dialogue between the characters. This is not necessarily a bad thing, though, as it does reveal the characters’ personality more, but some players may sigh in exasperation when confronted with yet another cutscene that serves no purpose in furthering the plot. Despite these shortcomings, Aretha: The Super Famicom still fares well against the troves of other RPGs during the 16-bit era.

All in all, the transition from the Game Boy to the colorful Super Famicom added a lot of depth to the world of Aretha. Aretha the Super Famicom has aged rather well and is still easily accessible, if not particularly complex. Players do not need to play the previous Game Boy entries; they can simply jump right into this game instead. And that’s not an impossible task for those who do not know any Japanese. As of right now, an English translation patch by Dynamic Designs is almost complete, so those who do not speak Japanese can enjoy this game to an extent.