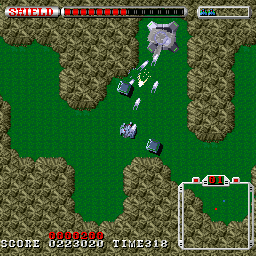 “In 2016, a female PEID agent hired Mercenary Leon Todo before being killed by an unknown assailant. Leon traveled to Tobora and finds the ‘Super Mobile Weapon’ known as Granada. Now equipped with the most awesome array of weaponry ever assembled, Leon sets out to the heart of the PEID.” This 1990 Wolfteam shooter more than makes up for its goofy premise by offering a fun, lengthy, and challenging experience.

Granada is an overhead tank shooter similar to Jackal. However, unlike Jackal the stages do not force you along a set path, allowing you to approach targets however you wish. Granada‘s stages are sprawling but do not feel empty. Each stage contains its own unique enemies and hazards such as boulders and lava-geysers to keep the game from feeling long and arduous. Granada is equipped with a radar to assist you in finding your targets. The radar also counts your remaining targets before you confront the boss. Once all the targets are destroyed, the radar will display the location of the boss.

The bosses don’t rely only on their many bullets to destroy the Granada. Strategy is required as players will have to find the opportune moment to fire the blaster weapon. Many of the game’s bosses have multiple forms and some need to have attachments destroyed for the boss to be susceptible to attack. Most bosses will chase the player, turning the whole stage into a battlefield. Even the confined bosses are interesting by having multiple segments or throwing small enemies in the mix.

Among the abundance of obstacles, the most dangerous is the timer. The limited time forces the player to rush, discouraging them from exploring and searching for hidden power-ups. Above Normal difficulty, the game can be a shortcut finding chore as the timer will be more threatening than the giant bosses and obstacles. With the timer being as low as 200 seconds, the game may lose its charm since players will have to memorize levels and avoid enemies to keep from losing precious time. Nothing’s worse than losing your last life on a boss because the timer hit zero.

In addition to your standard bullets, the Granada is equipped with a powerful blaster weapon. You need to be cautious as the blaster’s kickback can push you off a ledge or worse, into lava! You can strafe around enemies by holding the Locked Cannon button. Threre are five power-ups to compliment your arsenal: a cube extending your bullet-range, a scatter-shot saucer, a missile launcher, and a powerful explosive. The weapons available vary from stage to stage and only last until the end of the stage. In the X68000 version the explosive weapon is used to destroy mines for points in an exclusive bonus stage.

Granada for the Genesis is visually impressive for an early release. Due to the game being shown from an overhead perspective, the amount of animations are limited, but the sprites and backgrounds are well-drawn. The only stage to feature an animated background is Stage 2, which has impressive parallax scrolling for the clouds and the trees below. The bosses are large, animated, have smooth rotation and scaling effects, and most importantly: big explosions. In contrast to the rough visuals of the Genesis version, the X68000 version has smoother and more polished in-game graphics. It also has animated intro and credits scenes, and pixel art slides (shown at the bottom) between stages.

Granada‘s soundtrack was composed by Masaaki Uno and Motoi Sakuraba. Both versions of the soundtrack are filled with synthesized FM goodness. The Genesis version packs the deep and punchy sound Sega fans love. The X68000 version’s music doesn’t have as much of an impact, but has superior audio fidelity with each instrument being clearly audible. There are plenty of sound effects in Granada. Everything from blaster shots to robots jumping has a unique sound effect. With the exception of a few, the Genesis version’s sound effects are low and rumbling while the X68000 version has crisp, more meaty sound effects.

There is no compilation or download service to date to feature Granada. Granada is only available for the X68000 and Genesis. Like other X68000 games, Granada is difficult to find and if found, would likely be expensive. Inversely, the Genesis is common as well as inexpensive. Even complete, the game can be had for a low price. 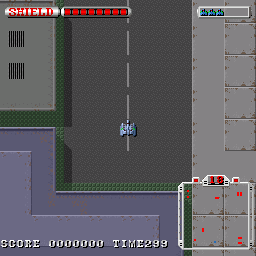 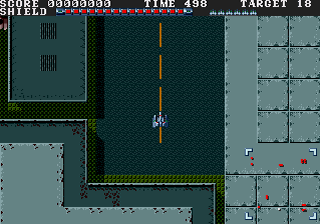 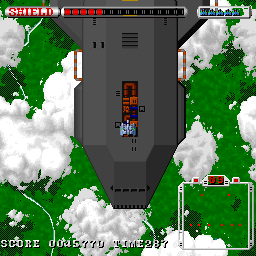 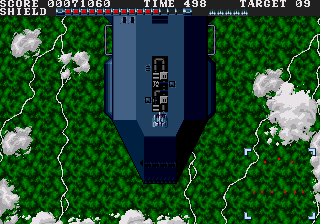 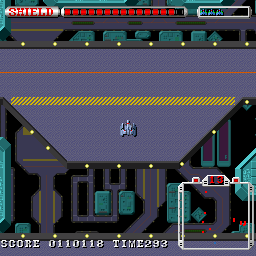 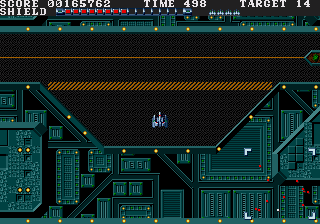