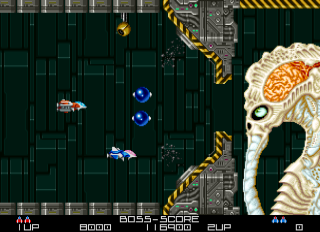 At first glance, Atlus’ 1992 shoot-em-up, BlaZeon: The Bio-Cyborg Challenge, may appear to be a Gradius knock-off without the upgrade system. As you’ve probably heard, appearances can be deceiving. Upon further investigation, BlaZeon‘s challenge is a unique and lasting one. What sets the TFF-001 Garland apart from other ships is its Tranqui-Lander weapon. With this weapon, the Garland can possess a selection of ‘Bio-Cyborgs’, and one ship, granting it protection and special attacks. This gimmick lends itself well to co-op as each player can have a different cyborg. Players must make good use of each of these Bio-Cyborgs in order to survive the five-level campaign.

This Bio-Cyborg is equipped with a 3-way spread-shot and an encircling bomb, making this cyborg deadly to enemies no matter where they are.

This speedy little ship is equipped with a twin laser and can render itself intangible for ten seconds, making this cyborg the perfect choice for evasive tactics.

This Bio-Cyborg is unique as it doesn’t have a secondary weapon. Instead, it comes equipped with dual laser-cannons which can be placed above, below, or in front of the cyborg.

This muscular Bio-Cyborg is armed with a scythe laser and homing missile launcher, making this cyborg a real powerhouse.

This Bio-Cyborg is armed with a wave beam and two forward-firing bombs, making this a good all-round cyborg.

This winged Bio-Cyborg comes equipped with an impotent machine gun and a powerful downward-firing grenade launcher, rendering this cyborg to only be useful in certain situations.

This slow Bio-Cyborg comes equipped with a diagonal cannon and bombs, which can eliminate enemy fire, making this a good cyborg for defense and support.

Like most arcade games, BlaZeon is crushing on its default difficulty. However, the difficulty doesn’t just come from its high bullet count. At times, players will have to maneuver through high speed obstacle courses and hop from cyborg to cyborg to make it to the end of the stage. Like Gradius, many enemies are placed in awkward places, forcing the player to wisely choose their targets when not in a cyborg. Available via dipswitches are four difficulty options: Easy, Normal, Hard, and Hardest. Mercifully, the player is granted unlimited continues so long as quarters are being fed. Shmup veterans will feel right at home piloting the Garland.

BlaZeon features challenging and inspired bosses, such as a missile firing giant plant and a boss slightly resembling a pachinko machine. The bosses operate on a timer, rewarding players bonus points the quicker they are defeated. When the timer hits zero, the boss self-destructs and no bonus is rewarded. Bosses have multiple destructible segments which, when destroyed, change their attack patterns. Players will have their skills and reflexes put to the test when facing Blazeon‘s bosses.

BlaZeon‘s sprites are large, smooth, and detailed. When animated, they are smooth and fluid. Backgrounds and sprites have high contrast, making use of warm and cool colors. The backgrounds are well-drawn, make use of multiple layers, and have nice parallax scrolling. Prior to the demo, an animation showcasing the possession gimmick is played. Before fighting the stage boss, your ship will engage its hyperdrive and speed towards the boss in a graphically impressive animation.

The soundtrack was composed by former Atlus-regular: Tsukasa Masuko. Tracks change in tone and tempo ranging from slow and soothing to fast and pounding; whichever the action calls for. Each song in the soundtrack is pleasing, with nice composition and high audio clarity. Masuko fills each song with deep bass, striking percussion, and swaying leads. Atlus has BlaZeon‘s soundtrack available on Compact Disc. The sound effects are nothing extraordinary, but are more than adequate with different weapon sounds and satisfying crashing explosion sounds.

The Super NES translation, released the same year, is a rather accurate one. The visuals and audio aren’t as high quality as expected, but are impressive for the platform. To make up for cartridge limitations, some animations, including the opening and parts of Stage 2, have been cut. Three difficulties (easy, normal, and hard) can be accessed by pressing select on the title screen. Like its arcade counter-part, unlimited continues are offered, but the player is sent back to the beginning of the stage. Stage 4 is almost its own unique stage with a junkyard theme. In lieu of the arcade version’s Stage 3 mid-boss, there are two exclusive mid-bosses in Stage 4. The most significant and aggravating change, is the lack of two player co-op, making this version a single-player affair.

In addition to the substantial changes, there are several minor and even weird changes. Some bosses have different attack patterns and there are some different enemy placements in parts. For some reason, Stages 3 and 4 have been switched in the Super NES game, and the beginning of Stage 4 is a recoloring of the beginning of the arcade version’s third stage. Perhaps the most bizarre, after the final boss is defeated, the game just loops with no credits screen shown. There are no differences between the Super NES and Super Famicom versions of BlaZeon.

As of this writing, there are no compilations or download services to offer BlaZeon. It is, however, easily found on eBay, often for less than 10 dollars for the cartridge only. The soundtrack, on the other hand, is harder to find and can cost upwards of forty dollars. Seeing as Atlus is still in business, there’s a possibility for the game to be available for download or released in a compilation. Perhaps some day soon, future generations will be able to accept BlaZeon‘s Bio-Cyborg Challenge… 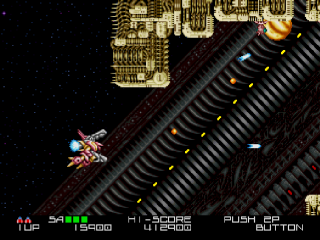 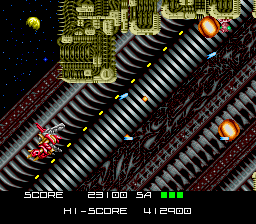 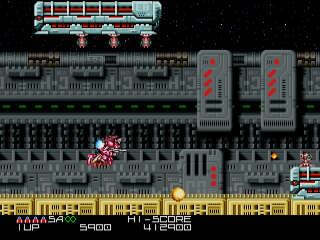 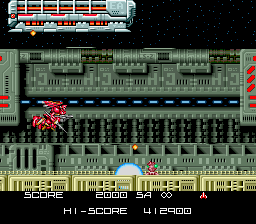