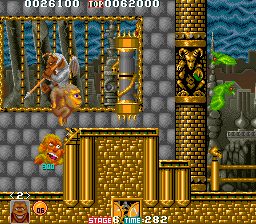 Japanese developer TAD Corp was formed by a handful of former Data East employees in the late 80s. They were only in business for about five years, with their most internationally well known game being the behind-the-back shoot-em-up Cabal. One of their other noteable titles is Toki, an action game featuring a projectile spitting monkey, which carries on Data East’s propensity for bizarre themes, found in games like Karnov. It was designed by Akira Sakuma, also previously of Data East.

The eponymous Toki (Juju in Japan) is a former human, who has been cursed with the form of a monkey by the evil Bashtar and the witch doctor Vookimedlo. To make matters worse, they’ve also kidnapped his girlfriend Miho. In journeying across the land, each stage is introduced with a Ghosts n’ Goblins style map, along with a brief bit of dramatic text describing the hero’s upcoming trials. 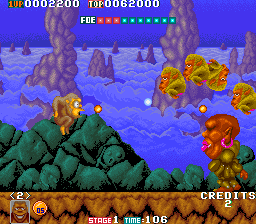 Toki attacks by spitting…something. Let’s just say they’re video game bullets. Various power-ups improve his abilities temporarily, including three-way shots, more powerful wave beams, charge attacks, and the ability to breathe fire. These attacks are also quite versatile, as you can shoot upwards and diagonally (though not directly below). In a curious control quirk, this only works when you’re on the ground, and Toki can only shoot left and right when jumping. Toki can also harm enemies by jumping on their heads, a standard platformer convention, which not only gives him an extra method of attack but can also be used to obtain otherwise out-of-reach items. Grabbing 50 coins, mostly dropped by enemies, will also yield an additional life.

The game itself resembles some of Irem’s side-scrolling action games like Legend of Hero Tonma, in that the main character dies in a single hit, and resurrects at a nearby checkpoint. Luckily, here these checkpoints are regularly placed, so even though you might find yourself getting killed often, at least you’re not punished too harshly. It does become more of an issue with the boss fights, though, at least until you’ve discovered their pattern. Toki’s relatively large size combined with the size of some enemy projectiles can make navigating between them fairly difficult. 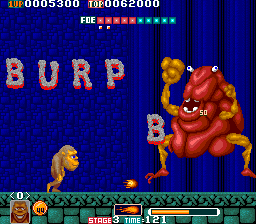 There were plenty of prehistoric themed sidescrollers in the late 80s/early 90s – Hudson’s Bonk’s Adventure, Titus’ Prehistorik, Data East’s Joe & Mac – but none are as quite as delightfully deranged as Toki. The hero himself strolls along with an unusual saunter, head drooped below his shoulders, with exaggerated facial features at every spit. One of the power-ups is an American football helmet (to shield from damage); another is a pair of white sneakers (to walk faster), both of which look ridiculous when worn. The enemies are far stranger than the unlikely hero – sure, there are other apes to face, but there are also things like flying sting rays. Right in the first stage, there’s a gigantic floating contraption, with faces that spit out steam and gloves that punch downward. As you destroy each piece and climb upwards, you see that it’s powered by two monkeys tugging on a lever like a seesaw. It’s just so bizarre that it sets the stage for the adventure ahead. 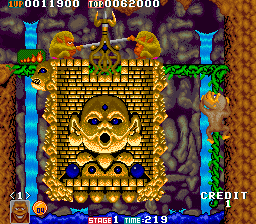 The most memorable boss is a gigantic wrinkled raisin-thing who attacks by yelling the letters “BURP”. The second most memorable boss is a disembodied pair of hands and feet, with a heart floating somewhere about its midpoint. Oddly, in spite of the quasi-prehistoric setting, there aren’t any actual dinosaurs to fight against, though there are plenty of strange ruins to explore, the final one decorated with statues of what appears to be some kind of goat god. Each of the game’s six stages has a boss at the end and most have at least one mid-boss, so there’s a good variety of oddball foes to contend with.

The graphics are colorful and the designs are consistently amusing, thanks to the excellently weird spritework. The main theme music is catchy, though the loop is a little simple and quite short. It’s also repeated far too often within the game, so it does wear out its welcome by the end. The sound effects are digitized samples, many sounding like they came out of a Looney Tunes episode, which is one of those things more commonly found in Western PC games than Japanese arcade titles, but nevertheless adds to Toki‘s eccentric charms. The game over screen challenges the arcade Ninja Gaiden‘s famous screen by showing a video screen (which exist in this world, apparently) with Miho desperately crying at you to keep playing or else she’ll be killed. 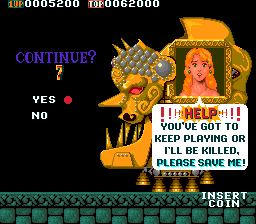 Toki was ported widely at the time, and some of the game’s enduring cult popularity (especially in Europe) can be traced to their generally high quality. The Amiga version is excellent, with visuals taken straight from the arcade game and only slightly suffer due to the lower color palette. The scrolling is a little choppy but it still plays quite well. The Atari ST version is similar, though with even further decreased colors and the removal of parallax backgrounds. The scrolling is  smoother but the game runs at a slightly faster speed than it should. The sound is weaker too, owing to the hardware, though it still sounds decent. The Commodore 64 version is expectedly simplified, and much of the visual charm is gone. It’s also completely missing the final stage. However, it’s still quite playable. The only major sticking point with these computer ports is that they only use a single button and use Up to jump, so in order to aim your shots – which you’ll need to do often! – you need to hold the fire button and then push a direction. All of these were published by Ocean. Amstrad CPC and ZX Spectrum ports were planned but never released.

The NES version was ported and published by Taito. Like the Commodore 64 version, the visuals are significantly stripped back, with sparse black backgrounds (in the early stages) and smaller sprites. However, there’s more character put into them, so it still preserves some of the arcade game’s goofiness. However, the levels are sparsely populated, making it much easier than it should be. The American NES version adds a life meter – you get two hits by default – further decreasing the difficulty. Overall, though, it’s still an alright port. It does have a hilarious new message in the ending, which inspires you to make “the best of the valuable experiences you acquired in the game”, which is somewhat overselling itself. 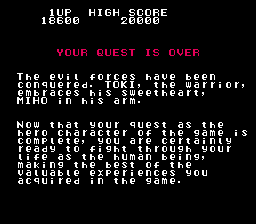 The Lynx version, done by Atari, suffers visually due to the lower resolution, but the system does it what can, and it’s still quite detailed and colorful. Some miniaturized ports have problems where they fail to scale the player character down to an appropriate size, resulting in a cramped playing field, but this version thankfully avoids this problem, and the game plays pretty well as a result.

The Sega Genesis version was developed by Santos, a company that worked closely with Sega before being acquired by them. While the system was known for its solid arcade ports in the early days (Strider, Ghouls n’ Ghosts, Altered Beast), Toki does not fall into that category. The entire game has been remade with completely redrawn backgrounds and brand new levels, plus there’s an expanded introduction which shows the villains’ fortress rising out of the land. There are nine levels rather than six, though the themes will seem familiar, as you explore volcanoes, jungles, and ice caverns. With these are some new bosses, and again, some are familiar faces from the arcade game, but some are new, like the submarine that shoots torpedoes with ape faces. Altogether, despite being broken up into small sections, the level layouts are less interesting than the arcade game, and a slog to get through due to Toki’s slower walking speed.  Dying will also send you to the beginning of an area, rather than respawning nearby. Plus, the muted color palette means it loses much of the arcade’s brightness, feeling like a launch-era Genesis game. There are a few new features, like new weapons (bouncing energy balls), and the redone music sounds excellent. It’s not very exciting, but since Toki never got a true sequel, this is as best as anyone is going to get, in spite of its quality drop. The American version adds the goofy subtitle “Going Ape Spit” to the title, plus it also renames Miho to Wanda and Vookimedlo to Dr. Stark, and changes some other enemy names as well. 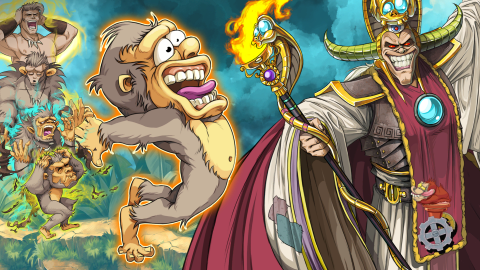 Toki was resurrected by Golgoth Studios in 2009, who presented a remake with completely new, redrawn graphics. The company also developed Magical Drop V (which was released on Steam) and pitched a remake of Joe & Mac (which never saw the light of day). Toki went silent for nearly a decade and most believed it was canceled, until it was resurrected by Microids in 2018, published on the Switch, Windows, PlayStation 4 and Xbox One.

This version redraws all of the graphics in a beautiful, comic book-style, and it looks spectacular. While the colors are a little muted, it otherwise matches up perfectly with the strange personality of the original game, plus it adds a significant amount of extra animation. In the original version, Toki’s large head stayed strangely still as he walked forward, but here he sways it very slightly as he wavers along. There’s a lot of detail put in here, and it’s clear that the artists and developers really loved Toki to put such an extraordinary effort into it. The music has been redone too, including some extra arrangements to make up for the lack of music in the original release. The original FM OST is still included as well. There’s also a brief comic book that illustrates the story. 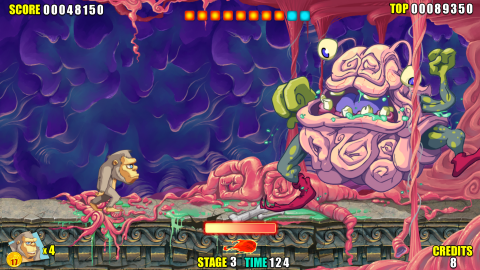 As for the game itself, it’s almost identical to the arcade release. The designs have changed slightly to accommodate the 16:9 layout, and there’s some lower difficulty levels that make the game more manageable, but otherwise it’s pretty faithful. Easier difficulty levels grant you up to nine lives, which is useful, because if you run out, you need to start the level over, compared to just restarting at the same place in the arcade version.

Alas, the title still presents a quandary – despite the relatively high quality of computer/console ports, none were quite arcade perfect, and even emulated versions of the arcade failed to show up on compilations or digital distribution platforms. So there’s no recourse for anyone who wants to play a version that’s truly arcade perfect. Conversely, if Golgoth went through all of the trouble to redraw all of its visuals, maybe a whole new game, or at least some improvements or added levels, would’ve been better? Because as it stands, other than the visual overhaul, it’s so close to the original that even though it’s quality work, it’s hard to get excited about. Still, it’s a miracle that it finally got released after spending so long in development/publisher hell, so some kind of release is surely better than nothing. 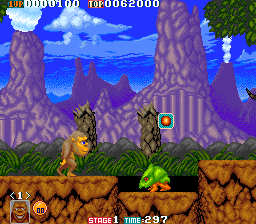 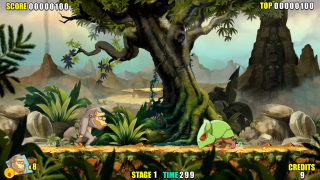 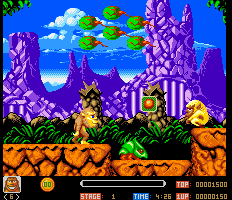 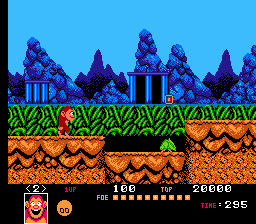