In truth, there’s very little of anything to do with ninjas. The Japanese subtitle, Tatakae Genshijin, is more closely translated as “Fighting Cavemen”, and many of the console ports simply go by the name Joe & Mac, the name of the wild haired duo who go out fighting dinosaurs and looking for babes. Some of the ports combine the two into Joe & Mac: Caveman Ninja. The arcade game was ported to several systems at the time, and grew out into three sequels – one exclusively for the arcade, and two for the SNES.

The story of Joe & Mac is typical – rival cavemen have invaded and captured all of the village women, and it’s up to the two heroes to venture forth and save them. It’s probably closest to the Bonk games in tone, although Joe & Mac was released over a year later. They’re both cartoonish takes on the prehistoric era that have the heroes fight against dinosaurs through jungles, waterfalls, volcanoes, and the like. There are even very similar segments where you jump into the mouth of a dinosaur and fight through its expansive innards. Despite these similarities, they primarily differentiate themselves due to their respective histories – Bonk was developed for home consoles, so it focuses more on expansive levels and platforming, whereas Joe & Mac was born in the arcades, with a focus on straightforward, two-player simultaneous action.

By default, the heroes toss axes, which travel either vertically or horizontally. They move on a short arc, which doesn’t get much distance. Whenever you get close to an enemy, you’ll also use your club to whack them. Additionally, you can charge up your attacks by holding down the attack button, which will toss larger, more powerful versions of the current main weapon. There are several different types of weapons, including stone wheels, fireballs, and shadowy doppelgangers that charge forward and attack, probably the only real “ninja”-like element of the whole game. Other power-ups include hot sauce, which will temporarily cause you to become invincible and breathe fire. Getting smashed by an enemy will also flatten you into a pancake for a few seconds, although you can still move and attack while squished. Finally, you can do a super-somersault leap by holding Up and Jump.

Joe and Mac’s life meters are long, but they count down slowly over time, similar to Adventure Island. Getting hit will drop it by several bars, but the copious amounts of food – including meat and, strangely enough, sushi – will replenish it bit by bit. Getting killed also sends you back to a checkpoint, unless you’re playing in two-player mode, although the levels are quite short anyway. It’s really only annoying during boss fights, particularly because their vulnerable spots can occasionally be tough to hit, making the battles drag somewhat. Many levels end up with a split path, allowing you to choose the next stage. Some stages also have you riding through the rivers on an aquatic dinosaur. The end of the game takes you inside the belly of a giant prehistoric monster, and there are three different endings, depending on the path you choose after the final boss. All of them involve Joe and Mac being comically chased, either by a horde of women, a single fat woman, or an effeminately dressed caveman. It’s not a remarkable game overall, but it’s reasonably fun, especially in two-player mode.

On the surface, the SNES version looks just like the arcade release with nearly identical graphics, but it’s actually quite different. All of the stages have been reworked and expanded in length, and there’s a map screen which connects all of the levels. You’ll occasionally find hidden keys, which will unlock gates on the map and yield bonus goodies. Don’t confuse this for Super Mario World, though – the game is still short and linear. 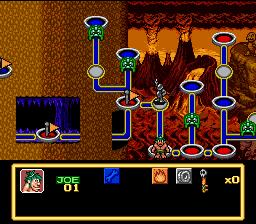 The changes definitely make for a fuller game, but some very important fundamentals have been changed, too, and not always for the better. You no longer lose health as time goes by, and instead of a long life bar, you get five hearts, which deplete by halves. When you’re killed, you’re resurrected on the same spot, as opposed to being tossed back to a checkpoint. Your default weapon is just the plain club with no projectiles, making you significantly weaker without power-ups. Furthermore, many of the enemies take multiple hits, whereas they would only take a single hit in the other versions. Some power-ups, like the hot sauce and body double attack, are missing, as is the ability to charge up weapons, and you can no longer get flattened into a pancake. You can, however, roll by double tapping in either direction. Other differences include the lack of the dinosaur riding areas, a different final boss, and only a single ending. In addition to the standard two-player mode, there’s a “Super Game”, which lets the players stand on each other’s heads, allowing both to reach items that would otherwise be out of reach. This is how it worked in the arcade game, but the standard two-player mode lets both characters run through each other. While the expanded content is great, the controls and framerate are a bit sluggish compared to the arcade version.

Compared to the SNES port, the Genesis version is more of a straight rendition of the arcade game. It controls better than the SNES game but obviously lacks the expanded levels. The graphics suffer a bit due to the 64-color palette, but it still looks pretty good. You no longer lose health over time, either. It was published by Takara and ported by Eden Entertainment Software.

The NES port is drastically scaled back, with tiny sprites and completely redesigned levels. There are five stages total, which are divided into two sub-areas, each punctuated by a boss battle. Some of these are new to this version, although they aren’t anything special – the first mini-boss is a small dinosaur, while the main boss is a giant T-Rex like the rest of the versions. Although the level designs are based off the arcade version, they’re also longer and different. The first stage is nothing but a long, straight plain. The graphics overall are pretty bad, despite some very impressive parallax scrolling in certain areas. The controls are pretty crappy, most of the power-ups are missing, and it doesn’t even have a two-player mode

The Game Boy port is based off the arcade version, again, although the levels are slightly reworked and expanded. Like the NES version, its controls are pretty bad and it’s missing power-ups, so it’s of little worth.

The computer versions are surprisingly decent. The Amiga version is limited to 32 colors, while the IBM PC version uses full 256-color graphics that are very accurate to the arcade. Both play very well, too, despite the downgraded sound in both cases. The IBM PC port is probably the best home version overall outside of the console ports. Arcade-perfect versions appear on Data East Arcade Classics for the Wii. 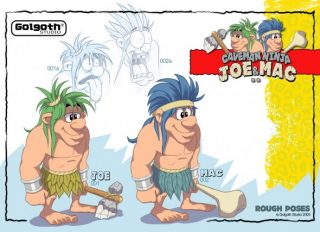 In 2010, French developer Golgoth Studios announced an HD version of Joe & Mac, with high res sprites. Other than some concept art, nothing else was revealed before it was canceled. 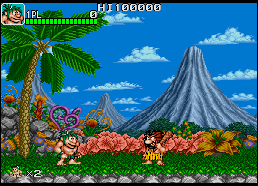 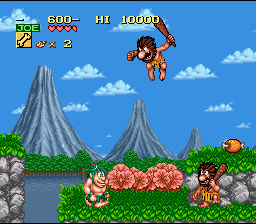 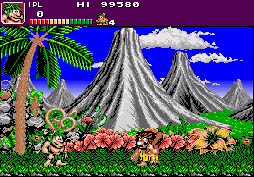