For some reason, in the early Nineties several games with cavemen heroes were made: Joe & Mac, Bonk’s Adventure, Chuck Rock, The Humans… French developer Titus Software was part of this curious trend with their artistically misspelled Prehistorik, another platformer starring a club-wielding primitive man.

This simple action game has no plot to speak of: Prehistorik the caveman just has to eat as much food as possible, by stunning the roaming dinosaurs and animals with his club and then eating them before they get up (there are human enemies, but they thankfully just die), or grabbing the edible stuff scattered everywhere, from fruit and meat to anachronisms like ice cream cones, french fries and canned food. It sounds a bit like Wonder Boy, but the gameplay is nothing like the fast arcade game, being much slower and more sedate. Prehistorik himself only slowly walks and has no skateboard, but uses once a hang-glider in a short sequence.

In order to complete a level the caveman needs to fill the hunger bar and then reach the exit, avoiding the usual traps such as spikes, bottomless pits, fires, all this on a time limit. And that’s pretty much it. There are seven levels, but only four of them are long platforming action sequences: the even-numbered levels are single-screen boss battles against a Godzilla-like dinosaur, a triceratops and a burly giant with a huge club, that need to be hit in their weak points. These battles are easy, but even grazing the bosses removes a whole life from the counter instead of just some energy from the lifebar. The music in these sequences is a blatant rip-off of Rocky’s theme “Gonna Fly Now”. The levels themselves are the usual 90s platformer locales such as grassy plains, frozen valleys, a forest and volcanic caves: humorously, the game ends when our hero finds the cave where his family lives, but why would they live inside a semi-active volcano full of angry dinosaurs and cavemen is not explained.

Another element vaguely reminiscent of Wonder Boy is how our hero has to go in certain spots of the levels to wait for the appearance of some sort of shaman (called “Guru Meditation” in the manual… yes, really). Instead of the secret bonus dolls from said game, this character makes bonuses appear such as alarm clocks for more time, shields for invincibility, springs to jump higher, a stone axe to kill everything in one hit and so on. Some times remembering where the shaman will appear is almost mandatory in order to finish a level that would become much harder to complete without these enhancements. There are also some infuriating one-way roads that bring back the caveman to a much earlier part of the level, thus causing him to run out of time before finding the exit.

All in all, this title is a very average platformer that, however, is still more fondly remembered than its improved sequels. From a technical standpoint, Prehistorik is almost as primitive as its main character: there’s no scrolling at all, just horizontal or vertical flip-screen; no parallax effects; no sound effects but just simple (if catchy) BGM, and all the sprites are barely animated. Despite (or because of) this, it received a sizable number of ports on other home computers, and the caveman came back in a number of sequels and remakes, including an appearance on Philips’ ill-fated CDTV.

Both this and the sequel were later re-released on Steam, and on GOG.com in the Prehistorik 1+2 bundle. The first one was also converted into an app to be found in the Google Play store. 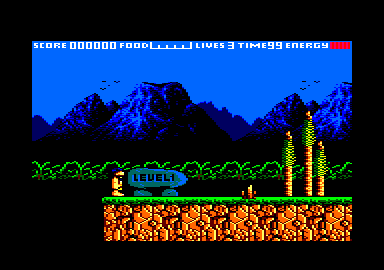